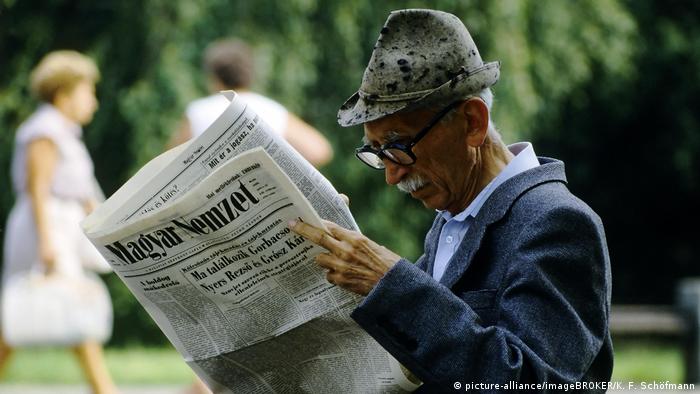 In the future, pro-government newspapers may be all you can get your hands on in Hungary

Hungarian newspapers, TV stations and media platforms have been under pressure from President Viktor Orban's government for many years now. Advertising revenues from state and even private sources have practically dried up. In recent years, press and media platforms have been bought up by business people with close ties to the government and have either been closed down or co-opted.

Now the government appears to have found another way of taking aim at the country's independent media. Magyar Posta, Hungary's state postal service, made the shocking announcement last week, tersely stating that nationwide delivery services for daily newspapers would be terminated on 1 July.

The official explanation is that it is no longer possible to maintain the service because years of declining circulation have made distribution economically unviable. It's an explanation that many greeted with skepticism.

"We were shocked when we found out," says Csaba Lukacs, the director of the Hungarian weekly newspaper Magyar Hang (Hungarian Voice). His publication is, however, not yet affected by the postal service changes, "We are a weekly newspaper," explains Lukacs. Still, he says he is worried "the Hungarian postal service could decide that it will no longer deliver weekly newspapers by the end of the year." Lukacs says that would be a disaster for his operation, which has a print run of barely 20,000 copies, "because there is no other alternative."

Not the first restrictions to hit the newspaper delivery service

Magyar Hang is printed in the Slovak capital Bratislava because its publishers were unable to find any Hungarian companies prepared to print the newspaper, says Lukacs. He said the editorial board is already devising plans B,C and D for the event that Magyar Posta discontinues weekly delivery service.

He said one possibility would be to stuff 5,000 envelopes every Thursday with the newspapers and take them to the post office for delivery. But he said that would cost three to four times as much as the existing service, as well as being more time-consuming. Another possibility would be to sell the newspaper at kiosks and food stores. But as well as being cumbersome, those kinds of approaches would likely cost publishers subscribers, too. "As publishers of a small newspaper we cannot afford to build up our own nationwide delivery service," Lukacs adds.

It is not the first time that the Hungarian postal service has sought to restrict newspaper deliveries. It stopped distributing to 19 local authorities back in 2016, and over the last twelve months the postal service has also begun delaying the delivery of the weekend editions of newspapers in a total of 82 communities. Magyar Posta said it could only deliver the weekend newspapers by Monday because of the pandemic and coronavirus-related precautions. Subscribers to independent Hungarian newspapers have also reported repeated delivery problems.

"The Hungarian postal service's move to cease delivering newspapers is very much in accordance with the cunning media policy practiced by the governing party," says media law specialist Gabor Polyak. The ruling Fidesz party's attempt to control the media no longer chiefly targets the people and organizations making the content — the newspaper, radio and TV channels and internet platforms — as Polyak tells DW. Instead, he says, the party has homed in on the industry's infrastructure and revenue sources, including the advertising market, which is controlled by the government and oligarchs loyal to Orban. Both Polyak and Lukacs agree that Magyar Posta's decision to stop delivering newspapers would compound the problem of unfair competition that already exists in the Hungarian media.

Pro-government media already gain disproportionate support from the Hungarian state. Almost all of these organizations are part of the Central European Press and Media Foundation (KESMA), a media conglomerate founded in 2018. On one single day — November 28, 2018 — 476 private pro-government media companies became part of the foundation. Officially, they were ‘donated' to KESMA by their owners, business people close to Orban. Even those with tiny circulations or limited reach receive a disproportionate number of advertising jobs from the government .

'I won't deliver your newspaper'

Hungary's biggest media holding, Mediaworks, was also donated to KESMA. It was previously owned by Lorinc Meszaros, a childhood friend Orban's and the former mayor in his home town of Felcsut. Over the past decade, Meszaros has risen from being a gas fitter with a moderately successful small business to becoming the richest man in Hungary. Years ago, Mediaworks built up its own distribution network, as a result, pro-government media at KESMA will barely be affected by the discontinuation of the postal delivery service.

Csaba Lukacs says Magya Posta's plans may force independent newspapers to sign distribution agreements with Mediaworks if they want to get their products to readers. He is convinced that reliance upon the Mediaworks distribution system could create considerable difficulties for the few independent newspapers that remain in Hungary. As a private organization, Mediaworks could demand more money than the state postal service but also feel free to say: "I won't deliver your newspaper." Unlike the postal service, a private company would have no obligation to deliver to all corners of the country.

According to Hungarian media reports, Mediaworks plans to deliver free newspapers to opposition-controlled cities in the future. The aim of this measure, says Csaba Lukacs, is to "regain the areas Fidesz lost in the 2019 local elections." The idea is to distribute free tabloid-style newspapers in train stations, in front of shopping malls and underpasses. "They will pack government messages like 'Stop Brussels and Soros' or 'Vote for Fidesz' between two bits of celebrity gossip," says Lukacs. He calls it "brainwashing."

Media law specialist Gabor Polyak also believes that the government has its eyes firmly set on the elections in spring 2022. Polyak sees less and less room in Hungary for independent media. "Fidesz does not like strong players with a worldview that contradicts the ideology of the governing party reaching large audiences."

Over the last few months, Daniel Freund, a German Green Party politician and member of the European Parliament, has been speaking out on behalf of Hungary's independent media during visits to the country. He has a similar take on the situation: "The Fidesz government wants to control what people read, hear and see," he tells DW. "Critical voices are being systematically crushed." Freund says what is happening in Hungary has nothing to do with the rule of law and he is calling for the EU to intervene with sanctions.

"These attacks on the free press should also prompt a decisive reaction from the CDU [Christian Democratic Union] which belongs to the same conservative bloc as Viktor Orban's party," he urges. Freund says it is unacceptable that German Chancellor Angela Merkel's party is "in cahoots with the enemies of democracy."

Fidesz's moves may ultimately force the European People's Party (EPP) to take action. On Wednesday, it will decide whether to change its rules and regulations to enable the exclusion of individual parties. Hungary's media policy is likely to have played a role here.

Meanwhile, Viktor Orban has issued his own ultimatum. In a letter written to EPP Chairman Manfred Weber, Orban threatened to pull out of the conservative bloc if it changed its rules to facilitate the possible expulsion of Fidesz down the road.

Coronavirus: 15% of Germans have been vaccinated, says RKI 26m ago

Kyrgyzstan holds vote on whether to strengthen presidency 3h ago