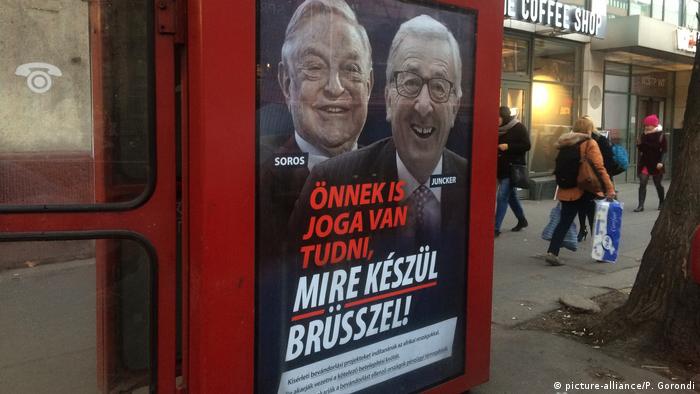 Juncker was responding to a political poster by Orban's Fidesz party that accuses the EC chief of working with the billionaire philanthropist George Soros to allow more migrants into Hungary.

"Against lies there's not much you can do," Juncker said. He added that the head of the European People's Party (EPP) in the European Parliament, Manfred Weber, should consider "if I need this voice" in the grouping.

The EU responded with altered versions of the campaign posters, instead showing Orban and Juncker together.

Another poster on the Hungarian government's Facebook page tells readers: "They want to introduce mandatory settlement quotas; they want to weaken the border protection rights of the member states; they would facilitate immigration with migrant visas."

Earlier, the European Commission denounced the posters as a "ludicrous conspiracy theory."

Commission Vice President Frans Timmermans said the posters were a type of spin "in a completely different universe."

Orban: 'We are fighting for the future of our country'

'Everyone has a right to know'

Hungary has defended the campaign as a way of telling citizens about "Brussels' plans to encourage immigration" ahead of the European elections in May.

"Everyone has the right to know which are the current proposals fundamentally threatening Hungary's safety," the government said.

Orban is one of Europe's most vocal anti-immigrant leaders and has regularly accused the Hungarian-born Soros of conspiring to purposely weaken Hungary's borders. Critics have accused him of using anti-Semitic tropes in many of his comments.

At the height of the 2015 migration crisis, he introduced a razor-wire fence along Hungary's southern border and denounced German Chancellor Angela Merkel's decision to allow hundreds of thousands of refugees into Germany.

Since then, he has restricted the ability for refugees to apply for asylum in Hungary and vehemently opposed efforts to reallocate refugees throughout the European Union.