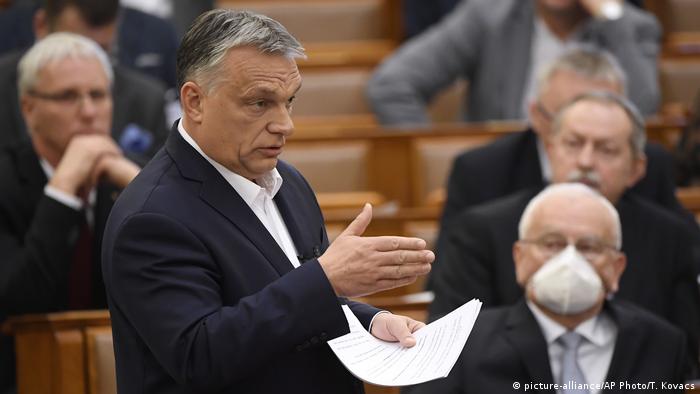 Hungary accused five Nordic countries Monday of spreading "fake news" over coronavirus emergency powers granted to Prime Minister Viktor Orban. Foreign Minister Peter Szijjarto has summoned the ambassadors of the five countries over the comments they made about the controversial law.

"This week did not pass without the international liberal mainstream continuing to spread fake news," Szijjarto said in a statement published on Facebook late on Sunday. He called on the northern European countries to "mind their own business."

The law, adopted on March 30, enables Orban to rule by decree with no fixed time limit because of the coronavirus crisis. Critics have said it gives Orban unprecedented authoritarian power.

Nordic countries: 'The law must prevail'

Prominent EU lawmakers have raised concerns about the ramifications of the new law in the EU member state.

"An indefinite and uncontrolled state of emergency cannot guarantee that the basic principles of democracy will be observed," said Secretary General of the Council of Europe Marija Pejcinovic Buric.

The five northern European foreign ministers wrote in a letter dated May 6 that they "shared the concerns" raised by Buric.

"Even in an emergency situation the law must prevail," the foreign ministers wrote.

Orban has been a controversial figure since he was elected in 2010. He told the EU in March that he does not hold unlimited powers and the parliament — where his Fidesz party holds two-thirds of the seat — could withdraw the law at any time.

"If you cannot help us in the current crisis, please at least refrain from blocking our defense effort," he wrote to Buric last week.

On Wednesday, the European Parliament will hold a session to discuss the rule of law in Hungary. The center-right European People's Party are among those backing the debate. Their leader, Donald Tusk, has called for Fidesz to be expelled from the group.