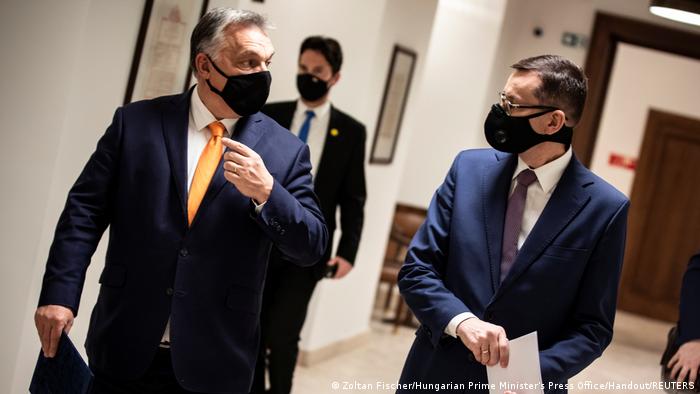 The leaders of Hungary and Poland vowed Thursday to uphold their veto of the European Union's next budget, which includes its massive pandemic relief fund.

The countries say a mechanism tying payment of the funds to rule of law principles risks derailing the bloc.

The EU had proposed to link its €1.8 trillion ($2.1 trillion) budget for 2021-2027 and coronavirus recovery package to a respect of the rule of law by its 27 members. This would allow funds to be denied to members that violated democratic norms.

Read more: Can the Polish government afford to be at odds with the EU?

Poland and Hungary are both at loggerheads with Brussels over the rule of law standards and the EU has opened legal procedures against them.

The two countries receive some of the highest amounts per capita of any EU country. Both need the funds to overcome the effects of the coronavirus pandemic, but their vetoes will be hard for the EU to overcome in passing the conditionality agreement.

"With their statement, Poland and Hungary are moving deeper into isolation," a senior EU diplomat told Reuters news agency.

Negotiations will continue at the EU summit next month. Hungary's Prime Minister Viktor Orban and Poland's Mateusz Morawiecki met in Budapest to discuss their plans.

The two leaders argue that the conditionality of funds is not written into the EU's founding constitutons and that such measures could be used against other countries in the future.

Orban said that a link between the EU's rule of law and the pandemic recovery fund could be disastrous.

"Whoever links them is irresponsible because the crisis needs fast economic decisions," he said.

Other EU leaders, such as the Italian prime minister, reiterated that they are optimistic of reaching an agreement.