Hungary is mulling sending over 2,100 police officers to its southern border to stop the flow of migrants into the country. Meanwhile, the police fired tear gas on people trying to leave a refugee center. 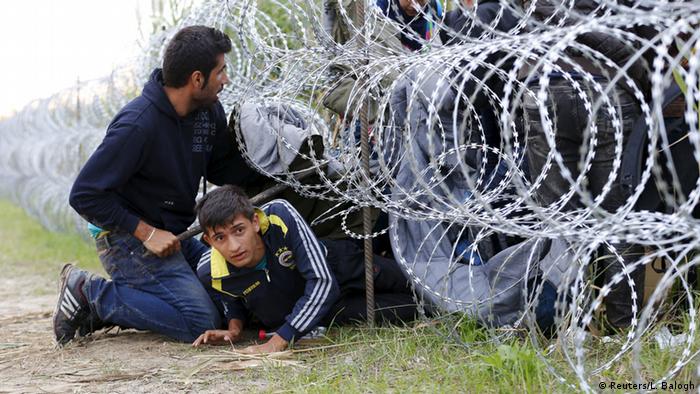 The Hungarian government said Wednesday it was considering deploying additional troops to its southern border with Serbia to impede the flow of migrants into its territory.

"The border protection will be reinforced with 2,106 extra police from September 5," Karoly Papp, the European country's police chief, told reporters in the capital Budapest.

The so-called "border hunters" will patrol the length of the border, providing the much-needed support to more than 1,000 regular police already working to intercept illegal immigrants, Papp added.

In addition, Hungary is also constructing a barbed wire fence along its border with Serbia.

Meanwhile, migrants and police briefly scuffled at a refugee processing center at Roszke. Television footage showed the police firing tear gas at some 200 migrants who were allegedly refusing to cooperate with the authorities.

The migrants didn't want to be fingerprinted, said Spokesman Szabolcs Szenti, a police spokesman, adding that the police were "trying to calm the situation, but the migrants were continuing to shout."

According to Hungarian police, a record number of migrants crossed the Serbian-Hungarian border on Monday. According to officials, 2,093 people - most of them from Syria, Afghanistan and Pakistan - made the journey.

Since Hungary is part of the European passport-free Schengen zone, many of the travelers hope to continue on to countries in Western Europe, such as Germany and Sweden.

The group is part of around 7,000 migrants who were stuck on the border between Greece and Macedonia. The latter declared a state of emergency and closed its borders, saying the high number of new arrivals had overwhelmed the small country.

The European Commission has pledged to give Hungary nearly $9.24 million (eight million euros) in aid to cope with the refugee crisis. However, the government says more is needed, according to an interview published on Tuesday with Prime Minister Orban's chief of staff.

People fleeing war and poverty in North Africa and the Middle East are seeking refuge in European countries, with most of the people turning up on the shores of Italy and Greece or being rescued at sea. Many of these people who arrive in Southern Europe want to move on to richer EU countries and claim asylum there.