Refugees have little fear of Hungary′s fence | Europe | News and current affairs from around the continent | DW | 23.08.2015

The Hungarian army has been building a fence on the Serbian border to keep out refugees and migrants. But it is not an insurmountable hurdle for them, DW's Nemanja Rujević reports from Subotica. 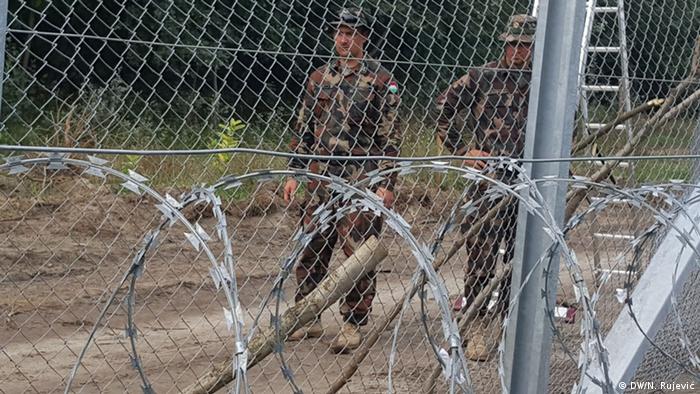 "Money, money, money" the legendary Swedish band ABBA sings from the speakers of a military vehicle near the town of Asotthalom. Hungarian soldiers joke and laugh, even though they have a boring task ahead of them, here on the border with Serbia: building a four-meter-high fence, which the government in Budapest has made a top priority. The posts have already been driven in, and now they need to raise and attach the wire mesh. The men in camouflage are trying to tension the wire without leaving any weak points.

"The migrants cross the border along its entire length," one soldier said. That's why the "Hungarian wall" is being built in a hurry to be ready by the end of the month. Razor wire, in coils around a meter high, is already in place and is very sharp. In one place it has caught a baby's bib, left behind by refugees as they climbed over it. Can the future fence stop them? "We hope so," the soldier said. 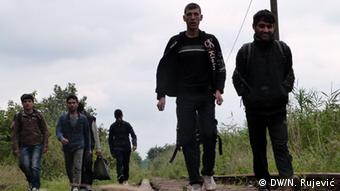 Waiting for 'the Pakistani'

Twenty kilometers to the west is a gathering of people who want to put the Hungarian fence to the test. They wait in an old brick factory on the outskirts of the northern Serbian town of Subotica. Inside, the walls are smeared with graffiti in Arabic and other languages ​​- a kind of guestbook. One bit violently insults Syrian President Bashar al-Assad.

It's an anger that even Milad can feel: "Everyone in Syria knows that Assad kills innocent people," the 27-year-old migrant from Damascus said. "The situation is very complicated and militias are everywhere."

Milad is on the run with his parents. He is an IT specialist and hopes that Germany needs people like him. He knows exactly which city he wants to go to: Frankfurt, because he has relatives there.

Milad and the other migrants here know how they can get past the Hungarian soldiers and the unfinished fence. The young Syrian says he is waiting for a call here in the brick factory.

"The Pakistani" would be in touch soon, Milad said. "He will bribe the police." The mysterious smuggler is a "veteran refugee," said a man who has stayed here at the Hungarian border to earn a lot of money.

Milad and his parents will pay a total of about 4,500 euros to be smuggled to Germany - if they are lucky. For migrants who do not have so much money, there are also cheaper deals: For 50 or 100 euros, they can be led to weak points along the border and left to fend for themselves. Supposedly "the Pakistani" manages to bring more than twenty people per day across the border. But of course he won't show himself as long as journalists are in the brick factory. That's why some of the migrants ask us to leave.

Not only do human traffickers take advantage of the migrants' woes, but so do Serbian police. They are already known for their readiness to turn a blind eye to offenses such as drunk driving for a 20-euro bribe.

Now they have discovered an even more lucrative business: They stop taxis traveling to Subotica and demand around 100 euros per head from the frightened refugees. "That's cruel," said a taxi driver, who was himself a witness to such scenes. "These poor people go out into the unknown and then they are even tormented here by the police."

And the taxi drivers also have to worry about being charged as smugglers. If that happens, they are threatened with a prison sentence and their car is immediately impounded. This year alone, more than 1,000 vehicles have been confiscated in this way, the Serbian weekly "Vreme" reported.

"Where is the logic?" asked the taxi driver. "These people want to continue to Hungary. Why shouldn't we make it easier for them?" 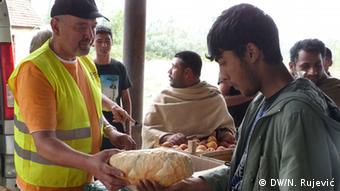 Pastor Tibor Varga hands out food to migrants, as he has done for four years

But the migrants also meet locals here who want to help. When Tibor Varga gets out of his gray pickup truck, they know that he's bringing them food. They recognize the Protestant pastor from his broad shoulders, his beard and his camouflage trousers.

Every day for the past four years - since the Arab Spring began - he has brought refugees bread, eggs and toiletries. "These people are emotionally shaken, because no one is interested in their problems," said Varga, who works with an Eastern European charity. "Sometimes a handshake, a broad smile and a soft voice help more than thousands of euros."

He says he can't understand how conservative politicians can warn of a "security risk" posed by the wave of migrants throughout Europe. "Even if I know for sure that one is a terrorist - what should I do if he is hungry and thirsty? I have already met thousands of people. So far no one has killed me." 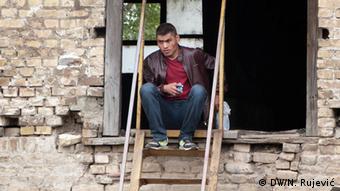 Migrants often pay smugglers thousands of euros for the journey

Varga likes to tell Bible stories, like that of the Good Samaritan. When it comes to the EU's reluctance to receive migrants, he says: "It's a bit like in the Middle Ages: The King has a castle, and the poor live around him. In dangerous times, they also want to come in, and the king must make a decision. And that's a moral issue."

The pastor confirms that the Hungarian fence is worrying the refugees. But he says they are not afraid of a bit of wire. "Looking at the other fences around the world, you can say that these people are very determined to get through it. They have already been confronted with major problems in their lives."

So far, the barbed wire has at least proved efficient when it comes to deer. And the hardware stores in Subotica are also feeling the effects of the fence: Wire cutters are big sellers these days.

Beleaguered refugees and migrants who had been stranded at the Macedonian border have resumed their journeys to seek asylum in western Europe. Mass movement has resumed after Macedonia reopened its frontier with Greece. (23.08.2015)

An unprecedented number of migrants crossing from Serbia into the EU state has overwhelmed authorities in Hungary. Budapest is vowing to increase aggressive enforcement along its frontier. (18.08.2015)