Before the work is publicly displayed, Orban's far-right supporters have called for the destruction of a sculpture honoring the Black Lives Matter movement. 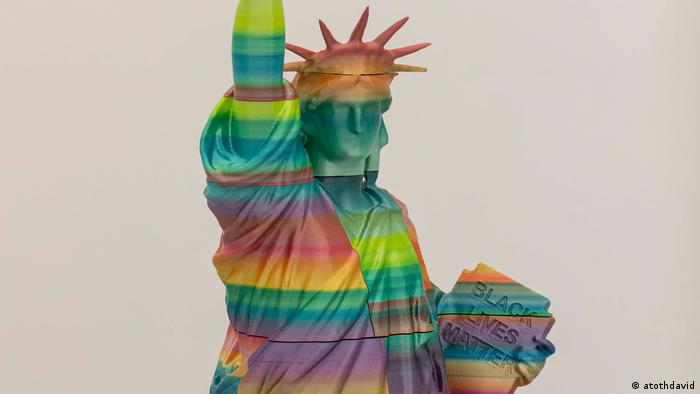 It is only three feet high and nowhere to be seen. Nevertheless, the sculpture by Hungarian artist Peter Szalay has been causing a stir in the country for weeks, sparking furious reactions in pro-government media outlets; the minister at the office of the right-wing nationalist Prime Minister Viktor Orbaneven had to intervene.

Szalay's 3D-printer work of art revisits the New York Statue of Liberty. In his sculpture, the iconic figure of Libertas is kneeling, stretching her right fist towards the sky. In the other hand, she is holding a plaque that reads: "Black Lives Matter."

The sculpture was selected along with six other works of art by an expert jury of artists and art critics for a series of works commissioned by Budapest's ninth district in December. The sculpture will be on show in the city for just two weeks in April. 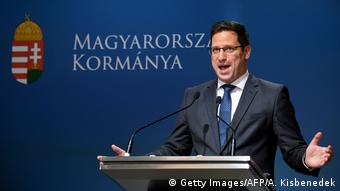 Gergely Gulyas, Minister at Prime Minister Orban's Office, has also spoken out against the sculpture

But since the Hungarian government and its media empire sees BLM as a violent radical-left movement and the commissioned artworks were financed by public funds, district mayor Krisztina Baranyi is already facing heavy criticism.

As a non-partisan mayor supported by the opposition, Baranyi says she's used to being condemned by the pro-government media. But now she is being insulted on all channels and threatened with rape and acid attacks, she told DW. "All we wanted was to give young Hungarian artists a chance to show their art in public," the district mayor said.

Commentators on Hungarian television contributed to fueling the controversy. One of them compared the artwork to erecting a statue for Adolf Hitler. Origo, the largest government-related online news site, described the sculpture as the beginning of "incitement and hatred against whites and Christians" in Hungary. Zsolt Bayer, a notorious right-wing media figure and co-founder of Orban's Fidesz party, even threatened to destroy it.

There was also criticism of the sculpture from the government itself. Minister at the Prime Minister's Office, Gergely Gulyas, called the Black Lives Matter movement "fundamentally racist" because it does not see white people as equals. "So it's not the ones who oppose a statue to BLM that are racist but the ones erecting it," Gulyas declared in December. 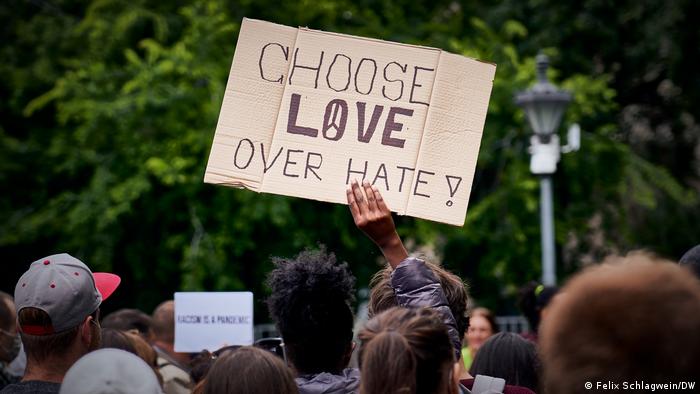 Artist Peter Szalay sees the criticism of his work as excessive: "My artistic intention was to deal with the Black Lives Matter movement as a phenomenon having tremendous impact on contemporary global society, which I am also part of," he told DW.

A sculpture in rainbow colors

Beyond Black Lives Matter, Szalay also aims to draw attention to the LGBTQ movement in his work: His Statue of Liberty is printed in rainbow colors. With this, the Hungarian artist also addresses the current restrictions of LGBTQ rights in his country.

In mid-December, the Orban government added in the Hungarian constitution that a child's mother must be a woman, and the father a man. Adoption has also been banned for homosexual couples. A few months earlier, it became illegal for transgender people to have their gender officially changed.

To show support with the LGBTQ community, numerous oppositional district mayors — including Krisztina Baranyi — hung the rainbow flag on the facade of their town halls. Backlash quickly followed; right-wing extremists tore down the flags and set them on fire. 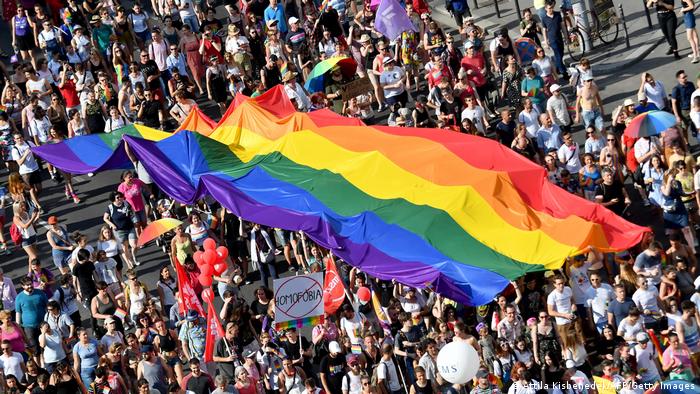 Artist Peter Szalay therefore assumes that his sculpture could also be destroyed. Nevertheless, he remains pragmatic about it: "I do not judge those who want to tear my sculpture down. If it happens, I will document it and consider it as part of the work," he says.

No additional security measures will be set up to protect the sculpture, district mayor Baranyi told DW, adding that the priority is to rather protect what it represents: "Many politicians in Hungary do not want to talk about issues such as racism, exclusion of homosexuals and Roma because they are afraid of losing votes. But after 10 years of the patriarchal and provincial policies of the Orban government, we have to stand up for it — even if it means losing voters," she says.

Threats to freedom of art

Ever since taking office 10 years ago, the Orban government has been trying to gain control of the artistic and cultural landscape in Hungary.

A culture council was set up last year to ensure the "strategic control of the cultural sectors by the government," expanding Budapest's influence on Hungary's most important cultural institutions. 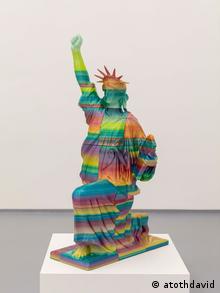 The colourful sculpture has angered conservatives

Most recently the government tried to bring the renowned University of Theater and Film Arts (SZFE) under its control through a foundation. The students then occupied the university building for months in protest — until they had to give up the blockade in November due to stricter regulations to prevent the spread of the coronavirus.

"There is no censorship in Hungary, but increasingly, artists are censoring themselves," says Zsuszanna Deme, deputy to Kristina Baranyi in Budapest's ninth district. She helped initiate the commissioned artworks project.

Visual artists are dependent on funds from the Hungarian Academy of the Arts (MMA), Deme told DW. Since the institution is also close to the government, many artists avoid doing critical art, since they know there is no money for it.

Peter Szalay also believes that the politicization of art has created a deep rift in the Hungarian art scene. Dialogue between artists who are state-funded and those who reject government support no longer feels possible, he says. But the artist still feels free in his own work. In his view, "Artistic freedom is not compromised in Hungary."

This article has been adapted from German by Elizabeth Grenier