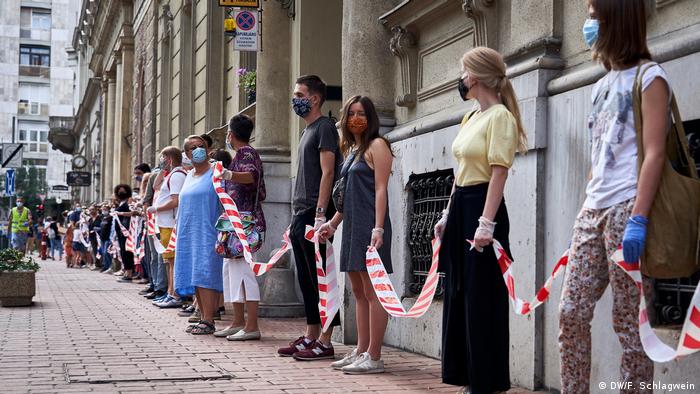 Within less than two weeks, fluttering red and white tape has become a symbol of resistance, hanging from street lamps, bicycle handlebars and house entrances; it is everywhere these days in the Hungarian capital. It is the kind of tape that has, since September 1, blocked the entrance to the renowned University of Theatre and Film Arts (SZFE) in Budapest.

The students have occupied the building, protesting against their new university management, which is a foundation whose members are close to Prime Minister Viktor Orban's government. Chairman Attila Vidnyanszky, who is also director of the Budapest National Theatre, is in fact considered to be a close Orban confidant. He has repeatedly said he wants to make the university more "national" and "Christian."

SZFE students and faculty are not the only ones who oppose the plan. On Sunday more than 10,000 demonstrators formed a human chain in protest that stretched from the university to the Hungarian parliament. With shouts of "free country, free university" they demanded the restoration of the 155-year-old theatre and film school's autonomy. 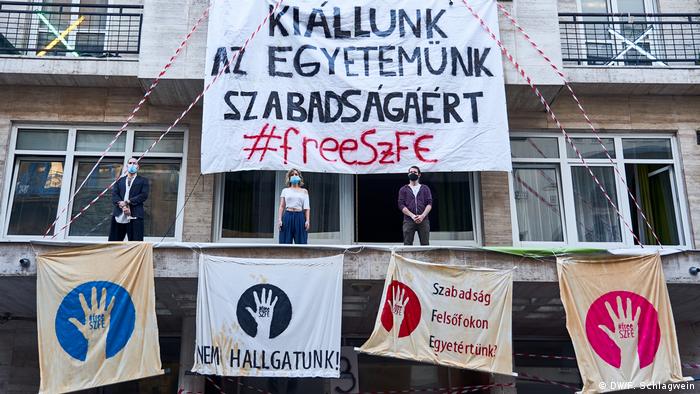 Support for the SZFE has been overwhelming in Budapest, and several Hollywood artists have also meanwhile expressed solidarity for the students.

Oscar winners Cate Blanchett, Helen Mirren, Eddie Redmayne and Cuba Gooding Jr and the Indian-British writer Salman Rushdie are among the signatories of a petition by the former director of London's Young Vic Theatre, David Lan. In an open letter, they describe the conflict over the SZFE as "part of a general cultural war to plunder the autonomy of all cultural spaces and institutions" and called for the return of the original university leadership. 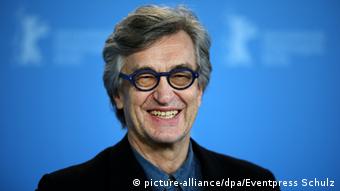 "We fully support the students and the Senate of the University in their decision to not recognize the legitimacy of the new board," said Wim Wenders, president of the European Film Academy (EFA). In a written statement the EFA president added that the "art of cinema can only breathe in an atmosphere of openness, transparency and democracy."

Under the hashtag #freeSZFE, others have shown their support, too, including the British actor Ian McKellen and the French actress Eva Green.

"We are deeply touched by all the solidarity we have experienced over the past weeks," SZFE student Dorottya Molnar told DW. "We definitely did not expect this."

In Germany, numerous theaters, art schools and cultural associations showed solidarity with the Budapest students. The Hamburg Schauspielhaus theatre said the autonomy and educational freedom of the university would be "seriously violated" by restructuring the SZFE. The German Film Academy and the German Stage Association called developments a "cultural-political and ultimately anti-democratic attack by the Hungarian government." Oliver Reese, director of the Berliner Ensemble, is supporting the Budapest students

The Berliner Ensemble even cancelled a guest performance at Hungary's 2021 MITEM theatre festival, directed by SZFE foundation president Attila Vidnyanszky. In view of the plans to exert political influence on the university, Berliner Ensemble Director Oliver Reese told DW he could not perform there with a clear conscience. "A red line has clearly been crossed," Reese said.

Vidnyanszky responded with an open letter to Reese: "I have always hoped that although our views of the world are different, we still understand each other so that we can have a tolerant and open exchange of ideas about the values we consider important." The director of the Berliner Ensemble said he did not answer the letter: "My answer is the cancellation of our participation at the festival."

The conflict over the University of Theatre and Film Arts is the result of a "culture war" that has been raging for years in Hungary. The right-wing national Fidesz government has repeatedly said it aims for a "change of elite" in the cultural and higher education sector. In 2018, Orban said the government wants to "embed the political system in a cultural era."

The country's theatres' self-determination was curtailed last year, the Central European University (CEU) was forced to leave the country, and authorities have since made inroads toward restructuring the Hungarian Academy of Sciences. 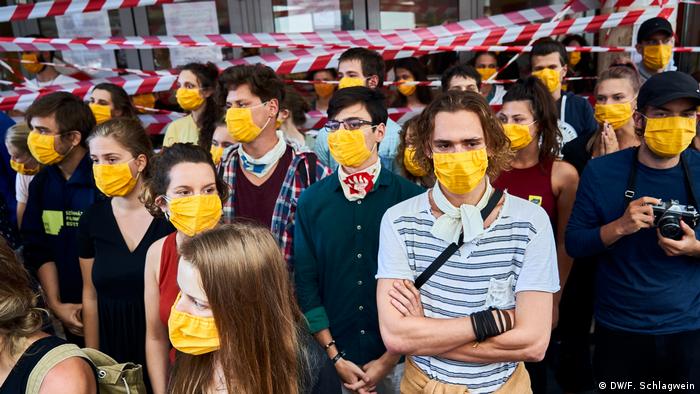 The SZFE students plan to occupy the university building until their demands are met. They demand the resignation of Vidnyanszky's foundation and guarantees for the long-term autonomy of their university.

Berliner Ensemble director Reese is confident, especially in view of the current SZFE protests, that the Hungarian culture scene can withstand the pressure of the Orban government. "Hungary has a strong culture and theatre tradition with great directors and actors. They will hang tough."

Hungary's emergency powers law, which gave the government sweeping powers, was introduced to fight the COVID-19 pandemic. But in an interview with DW, legal scholar Gabor Halmai said he fears the law is here to stay.

A law that holds a prison sentence of up to five years for spreading "false information" is part of new measures against COVID-19. As Fanny Facsar reports, journalists fear it could make it even harder to report news.