Austrian Chancellor Faymann and Hungarian PM Orban have agreed on day-to-day cooperation to control the refugee flow between the two countries. Hungary also announced completion of a fence along its Croatian border. 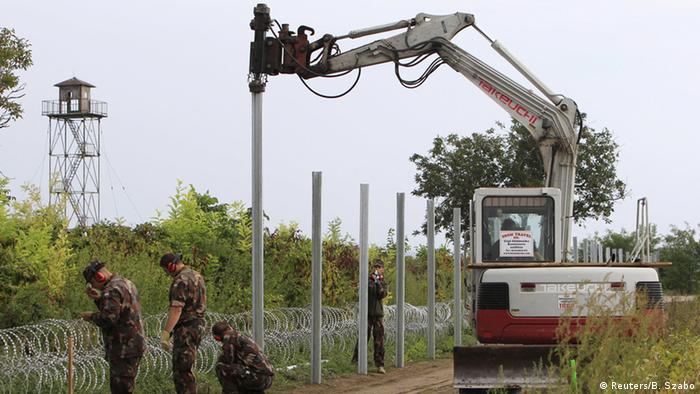 Hungary's Prime Minister Viktor Orban said he would seek international support for his efforts to shut his country's southern borders with Croatia. The prime minister said he would also consult the United Nations before making a final decision on blocking the border.

"This is the big question of the next few days and weeks, I am trying to seek supporters for this," Orban told media in Vienna after meeting with Austrian Chancellor Werner Faymann.

"The way I see it now is that, even if not whole-heartedly, Austria acknowledges that Hungary, if it wants to uphold international agreements, should implement actual border controls along the Croatian-Hungarian border," said the conservative Hungarian leader.

Austria's center-left chancellor called for implementing better systems of information sharing on the arrival of refugees at the Austrian border, said a statement released by Faymann's office on Friday. At the same time, the chancellor emphasized that European standards for accommodation, care and asylum processing must be respected.

Meanwhile, the Hungarian government said it had nearly completed a fence along its Croatian border to stop the refugee flow into its territories.

But Zoltan Kovacs, a government spokesman, insisted the eastern European country did not want to close the border but only wanted "to protect the border of the European Union," adding that the option of a legal entry was still open.

Some 59,000 refugees have entered Croatia since Hungary closed its border with Serbia on September 15.

The closing of Hungarian-Croatian border would likely create more problems and strand thousands of migrants transiting the Balkans from war-ravaged Middle Eastern nations.

Thousands of people are fleeing a protracted war in Syria and heading to Europe via the Mediterranean Sea. The arrival of these refugees has sparked a refugee crisis unseen in Europe in decades, with many governments imposing strict border checks to impede and manage the flow of migrants.

Germany and other European countries have pledged to take thousands of asylum-seekers as a gesture of solidarity.

Earlier this week, the 28-member European Union agreed on a quota to distribute some 120,000 refugees.