Chancellor Angela Merkel has told parliament that an overnight Brussels summit was a "first step" in tackling Europe's refugee crisis. Longer term, the world must tackle the root causes of war and poverty, she said. 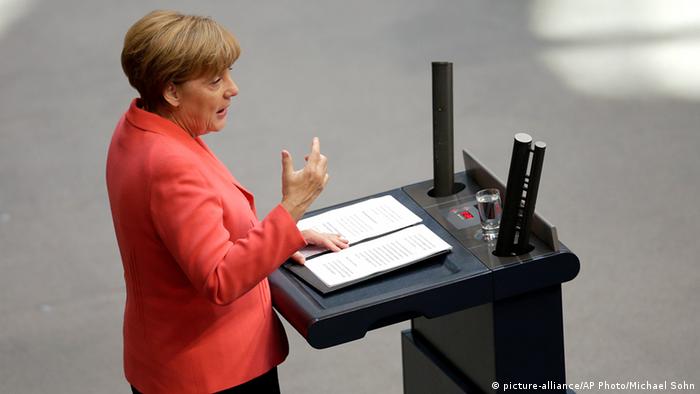 Chancellor Angela Merkel said Thursday that the 28-nation EU had recognized Europe could only solve the refugee crisis by working together to identify asylum seekers arriving via Greece and Italy - and by providing funding to Middle Eastern nations such as Jordan and Lebanon already hosting millions of refugees.

"How we deal with the current crisis will shape our continent well into the future," Merkel said. "We have now taken an initial step, but we are by no means where we need to get to."

Merkel said Wednesday night's emergency summit of EU leaders was a "signal of unity" that progress had to be made of "detailed questions" such as the creation of "hot spot" registration centers by late November in Greece and Italy as well as possibly in Bulgaria.

Europe needed a permanent system for a "fair distribution" of refugees, she said, adding that solutions were needed to causes of flight from the Middle East, especially Syria, and other troubled nations, such as Eritrea.

"That can only happen with the support of our transatlantic partners, the United States, as well as with Russia and the states of the region of the Middle East because of the desolate situation in Syria," Merkel added.

She confirmed that EU leaders had pledged at least 1 billion euros ($1.12 billion) for Syrian refugees to be distributed via UN agencies such as the World Food Program and UNHCR refugee commission.

She said the heads of the EU's Council of Ministers and the European Commission, Donald Tusk and Jean-Claude Juncker, respectively, would hold talks in October with Turkish President Recep Tayyip Erdogan on Ankara's role in the Syrian refugee drama.

Only together with Turkey could the European Union secure its outer borders, Merkel told the Bundestag parliament.

One key task was to identify and register asylum seekers via accelerated asylum procedures while sending back home those would did not qualify for protection, she said, adding that "minimum standards" of care for refugees must be met.

Merkel's remarks followed a deal reached Tuesday among EU interior ministers to relocate 120,000 refugees, mainly from Italy and Greece, across the bloc, despite opposition from eastern European nations, including Hungary and the Czech Republic.

Her address drew long applause from parliamentarians as she thanked volunteers, police and emergency workers who in recent weeks dealt with tens of thousands of refugee arrivals across Germany. 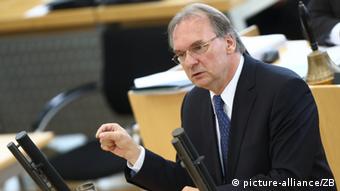 Merkel is set to hold talks later Thursday with premiers of Germany's 16 states.

Baden-Württemberg Premier Winfried Kreschmann told SWR public broadcasting that 10,000 euros per refugee was needed. Only 5 percent to 10 percent of the overall cost was currently being carried by the federal government, he said.

Opposition Left party deputy group leader Sahra Wagenknecht said Germany's poor, not its wealthy elite, would be hit by diversion of monies to fund the integration of refugees.

"Whoever allows that to happen will poison the climate in our country," she said.