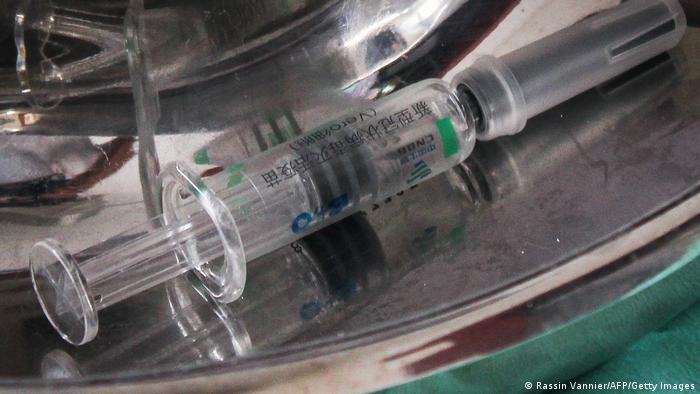 A syringe containing the Chinese COVID-19 vaccine produced by Sinopharm

Hungary last week also broke ranks with the EU by issuing a provisional license to Russia's Sputnik V vaccine. The EU has said that Hungary's striking of the deal outside of the bloc's common framework was improper although not illegal.

Hungarian Prime Minister Viktor Orban said earlier on Friday that his government planned to sign a deal with the Chinese firm "today or tomorrow," adding he would choose it for his own vaccination.

"The Chinese have known this virus for the longest time, hence probably they know most about it, so I will wait for my turn and when I choose I will want the Chinese vaccine," Orban said.

The prime minister's chief-of-staff said the government expected to order 500,000 doses of the Sinopharm jab for delivery in February.

Orban's administration had paved the way for the approval of the Chinese vaccine on Thursday by announcing it would grant emergency approval to any vaccine that had already been administered to at least a million people anywhere in the world.

The Hungarian government said the decree was needed to speed up the process of approval. It also allows approval if a shot has been used in three other countries, including at least one EU or EU-candidate country.

Orban said Hungary was following the mass rolling out of the Chinese vaccine in neighboring Serbia, an EU candidate country that has a sizeable community of ethnic Hungarians.

The Hungarian prime minister has long sought strong relations with Moscow and Beijing as part of what he calls a "pragmatic" foreign policy. He is also regularly is at odds with Brussels, particularly over migration.

DW correspondent Sergey Satanovskiy is participating in the Russian Sputnik V COVID-19 vaccine trial. He does not know whether he is receiving the actual vaccine or a placebo. This is the second part of his report.