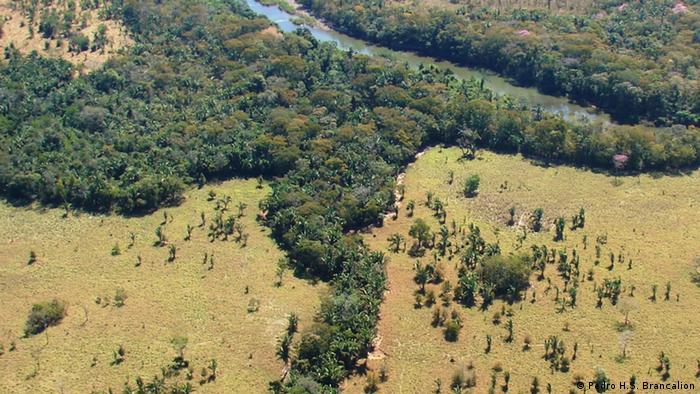 Solve this puzzle: a sprawling sugar cane plantation built on deforested land in Brazil’s Atlantic Forest has isolated a group of frogs. Unable to travel safely between where they feed and where they breed, they risk extinction. How can they survive and thrive in the face of man-made changes to their fragile landscape?

For a group of researchers in Brazil, the answer was to create a wildlife corridor, or an area of habitat connecting ecosystems broken apart by human activity. The frogs were provided with enough shady trees along a cool stream to enable them to swim through the water without excessive exposure to bright sunlight, or fear of being easily spotted and snatched by a predator.

But there are other examples of far more elaborate corridors. Some mimic the original rainforest habitat, with dense masses of deep green broadleaf trees, bushy shrubs, drooping canopy and other native tropical vegetation re-planted to closely simulate the structure, function and composition of the original ecosystem.

As Rubins Benini, a conservation specialist at The Nature Conservancy in Brazil explains, such corridors stimulate further growth.

"Flora [through seed dispersion] and fauna can circulate through restored areas and migrate to once isolated areas," he told Global Ideas. "This contributes to the genetic diversity and increases gene flow."

Patching Together a Problem 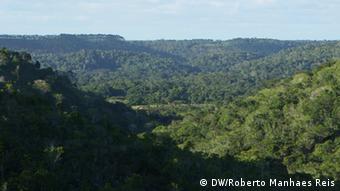 Five hundred years ago, Brazil’s Atlantic Forest was the size of South Africa. But today, over 90 percent of this global biodiversity hotspot has been deforested to make way for booming industries such as soy, sugar cane and cattle ranching.

In the remaining fragments, plant and animal species are less likely to have the full scope of necessary ecosystem services such as clean drinking water or food, and are more susceptible to inbreeding or starvation, said Professor Pedro Brancalion from the Tropical Forest Laboratory in Piracicaba, Brazil. "In this context, corridors are often important and even necessary for biodiversity persistence."

In recent years, a number of Brazilian and international NGOs such as The Nature Conservancy and UK-based World Land Trust have partnered with local research institutions and universities to help create the corridors. The World Land Trust purchases land from private owners - mostly with funds collected from European donors - and then gives it to local on-the-ground organizations for research purposes as well as for the construction of corridors. In the case of the Nature Conservancy, the organization buys land and then employs its own scientists to build corridors.

But some of these nature passages are the result of larger governmental efforts and are funded through carbon credit. They include those established to support conservation of the highly threatened golden tamarin in Rio de Janeiro state, and large corridors in the Pontal do Paranapanema region in São Paulo state, which is home to some of the forest’s last jaguar populations.

It is important that the corridors are wide enough - from around four meters - but not too long to deter animals from using them, and that they are authentic enough to encourage useage by several species.

"If the big animals can use it, then the bats and butterflies and everyone else can use it as a corridor," said John Burton, the CEO of the World Land Trust.

A panacea against biodiversity loss? 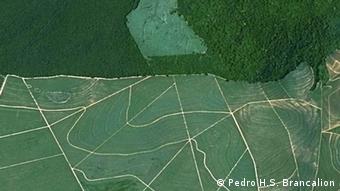 While some ecologists view wildlife corridors as a panacea, they stand little chance of helping to preserve biodiversity if the fragments of land they are connecting have less than 10 percent remaining forest cover. In this case, the greatest focus should be on replanting.

"The flow of movement between fragments will increase if you increase forest cover," Brancalion said.

And that, says Paul Beier, a specialist in science-based design of wildlife corridors at Northern Arizona University, can have other positive effects.

"In some cases the species might be in one end of the corridor and not the other, and as we conserve the corridor it can actually expand," he said.

Ricardo Rodrigues, a professor at the Laboratory of Ecology and Forest Restoration at the University of São Paulo says the creation of the corridors is compatible with Brazilian environmental law.

The Atlantic Forest Restoration Pact, signed by over 80 private companies, environmental organizations, governments and researchers, aims to reforest 15 million hectares of deforested land by the year 2050. Also under a recent law, if a company decides to deforest a plot of land for development purposes, three percent of the value of the project has to be go towards conservation of land elsewhere.

Yet as prices in Brazil rocket, purchasing land from private owners for conservation reasons is becoming increasingly difficult. "Land that can be used for agriculture is very expensive, so cost is the driving force behind the challenge [of creating wildlife corridors]," Rodrigues said.

Non-profits such as the World Land Trust, which buy land and donate it for conservation purposes, have prices quadruple in the past few years. Burton says his organization encourages its partners to find matching donations in Brazil, but that is a challenge in itself. World Land Trust needs some $100 million to finish its Emerald Green Corridor project -- connecting the Moconá Provincial Park with the Esmeralda Provincial Park and the Turvo State Park in Brazil.

"It’s pretty frustrating when you read about how much money some of these football teams are paying for a piece of grass with people kicking a ball on it,” said Burton, “and realize what you can do in terms of saving the rainforest."

The incessant exploitation of natural resources in the Philippines is crippling the country's rainforest and biodiversity as well as robbing indigenous people of their livelihoods. (17.12.2013)

Our reporter received Californian redwood saplings at her Berlin address. But she didn't foresee the environmental and legal problems of planting non-native species, especially as climate change reshapes climate zones. (02.12.2014)