How NATO weapons from Afghanistan are impacting Kashmir′s militancy | Asia | An in-depth look at news from across the continent | DW | 18.05.2022

How NATO weapons from Afghanistan are impacting Kashmir's militancy

Bombs and weapons used in Afghanistan by militants and US forces are making their way into India-administered Kashmir, raising fears that they could bolster an Islamist insurgency in the area. 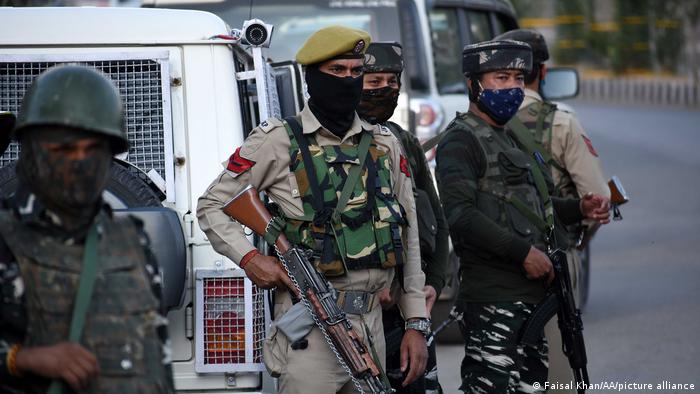 The Jammu and Kashmir Freedom Fighters, a lesser-known militant outfit, claimed responsibility for the assault, saying the bus was targeted with a sticky bomb, a type of Improvised Explosive Device (IED). These bombs can be attached to a vehicle and detonated remotely.

The use of a sticky bomb by Kashmiri militants is a relatively new phenomenon. In February 2021, Indian security forces seized dozens of such bombs during raids in India-administered Kashmir.

These bombs were regularly used by militants in Afghanistan against NATO forces. Indian security officials say their presence in the insurgency-marred valley doesn't augur well for the region.

Indian military officials also say that they have found more weapons that have American stamps on them.

Afghanistan's border with northern Pakistan is close to India-administered Kashmir, which, New Delhi calims makes it easier for militants to cross into the disputed territory.

Islamabad denies any military or tactical suupport to Kashmiri insurgents and maintains that its backing is only diplomatic.

Videos showing militants carrying M249 automatic rifles, 509 tactical guns, M1911 pistols, and M4 carbine rifles have also surfaced. Also, over a dozen Iridium satellite phones and Wifi-enabled thermal imagery devices that help militants to infiltrate safely and circumvent security cordons, especially during the night, have been found in Kashmir. These weapons were also used by the US forces in Afghanistan.

In February, Major General Ajay Chandpuria, an Indian army official, admitted that high-tech US-made weapons made their way to Kashmir from Afghanistan.

"From the weapons and equipment that we recovered, we realized that there was a spillover of high-tech weapons, night-vision devices and equipment, which were left by the Americans in Afghanistan, were now finding their way toward this side," Chandpuria was quoted as saying by Indian media.

"Some of these [weapons] have been recovered during recent encounters at the Line of Control (the Indian-Pakistani border along Kashmir)," he added.

A senior military official told DW that the proliferation of American weapons into Kashmir is being examined.

"The fall of Kabul has a profound impact on the security situation in the region, particularly in Kashmir. We witnessed a spillover of Afghan fighters into Kashmir after the Soviet exit from Afghanistan in 1989, and we might see it again. But the Indian army is prepared to deal with it," he said.

After the withdrawal of the Soviet forces, Islamist militants of different nationalities in Afghanistan started entering Kashmir to support local militants in their fight against New Delhi.

The militants coming from Afghanistan gave an impetus to the Kashmiri insurgency, but also turned a largely political conflict into a violent movement, according to analysts.

In the 1990s, around 1,000 foreign militants were killed and hundreds were arrested by Indian security forces. Most of them were calimed to be Afghans and Pakistanis, but there were possibly also militants from Central Asian and African countries. Pakistani state denies any involvement in the militant movement.

Kashmiri authorities say that currently nearly 50% of active militants in Kashmir are not locals. Kashmiri separatist groups claim the movement against India is completely indigenous.

Changing dynamics of militancy in Kashmir

The spike in the number of foreign militants in Kashmir has raised fears of more attacks on pro-New Delhi politicians and the minority Hindu community in the territory.

Arzan Tarapore, a security expert at Stanford University's Asia-Pacific Research Center, told DW that "these small arms by themselves do not represent any substantial increase in militant capabilities in Kashmir."

But militant attacks are already on the rise in the area, which is claimed in its entirety by both India and Pakistan, although both South Asian countries only rule parts of it.

On May 13, militants killed Rahul Bhat, a government official from the Kashmiri ethnic Hindu community inside his office in Budgam district. Both militants involved in Bhat's assassination were later killed in northern Kashmir. Officials said they were foreign militants but their nationalities could not be ascertained.

Tarapore says the movement of "battle-hardened" fighters from Afghanistan to Kashmir is a consequence of the Taliban's return to power in Afghanistan.

At the same time, he said, Indian security forces must deal with the changing dynamics of militancy in Kashmir, which is unrelated to the US withdrawal from Afghanistan.