How ′sticky bombs′ could impact Kashmir insurgency | Asia| An in-depth look at news from across the continent | DW | 02.03.2021

Afghanistan has seen a recent spate of "sticky bomb" attacks. Their arrival in India-administered Kashmir now raises concerns that a Taliban-style violent insurgency could soon grip the disputed Himalayan region. 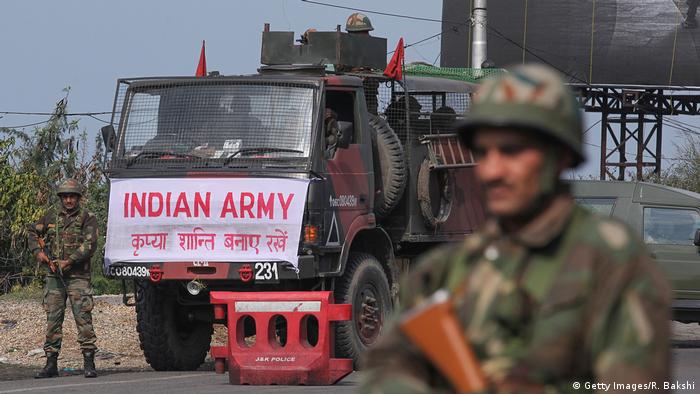 "These bombs are a threat to security forces. We have issued orders to the security forces to remain alert," Rajesh Sharma, a senior police official in Samba district, told DW.

Sticky bombs, or Magnet-attached Improvised Explosive Devices (MIEDs), can be attached to a vehicle and detonated remotely.

They have been used by militants in Afghanistan over the past few months and although these bombs have not been used by Kashmiri insurgents, officials fear their presence could be a sign of impending violence in the disputed region.

Muslim insurgents have been fighting Indian forces in the Indian-administered part of Kashmir — a region of 12 million people, about 70% of whom are Muslim — since 1989. Two of their three wars that India and Pakistan have fought since their independence in 1947, have been over Kashmir — which both claim in full, but rule in part.

Police official Rajesh Sharma claims the sticky bombs arrived in the valley from Pakistan, which rules part of the region across the Line of Control (the India-Pakistan Kashmir border). "We are investigating it," he added.

However, the claim that Pakistan-based militants have a role in all of this has not been verified.

Sharma says the bombs were meant to be delivered to The Resistance Front (TRF), a militant organization that emerged after the abrogation of Kashmir's special status.

"They don't look locally made; they have been manufactured by some arms-producing company," the official said.

Mukesh Singh, inspector general of police in Jammu, told DW that experts are analyzing whether these are the same explosive devices being used by the Taliban in Afghanistan. "We are awaiting a forensic report. Right now, we can't say where they came from," Singh told DW.

Kashmir is the world's most militarized zone and more than half a million Indian troops have remained stationed in the region since 1989 — when a violent pro-independence insurgency erupted. The troops are accused of carrying out gross human rights abuses against civilians.

Military and paramilitary convoys patrol the region and that raises concerns that potential sticky bomb attacks on security forces could also hurt civilians.

"I am worried after hearing about the sticky bombs. I fear there could be collateral damage during militant attacks," Javaid Ahmad, a Srinagar resident, told DW.

Security officials say they are aware of the threat that MIEDs pose to the civilian population.

"MIEDs can wreak havoc in Kashmir," a security intelligence officer told DW on condition of anonymity, adding that these bombs could be used for targeted killings.

"Attackers only need bombs and certain targets. High-profile persons could be vulnerable to sticky bomb attacks," he added.

Security officials say they are reviewing the standard operating procedures for the movement of the military and paramilitary convoys to eliminate the MIED threat.

The relative absence of mass protests and violent attacks following the August 2019 measures have surprised many experts. Some of them say the insurgents are assessing different tactics against New Delhi.

A senior counterterrorism official in Srinagar, who wished to remain anonymous, told DW that sticky bombs pose a new challenge to the security forces.

He also accused Pakistan's Inter-Services Intelligence (ISI) spy agency of helping Kashmiri militants: "The ISI supplies them (sticky bombs) to the Taliban as well as to Laskar-e-Taiba (LeT) and Jaish-e-Muhammad in Kashmir," he claimed, adding that The Resistance Front, too, has links to LeT.

Islamabad denies allegations that it supports militant groups in Kashmir.

TRF has repeatedly denied reports that it is affiliated with the LeT, saying such accusations are aimed at maligning an "indigenous" and "legitimate" group.

Another security official, who also spoke on condition of anonymity, said that it is not right to blame Pakistan for everything in Kashmir.

"People's sentiments have been hurt due to the abrogation of Kashmir's special status. Multiple militant outfits have emerged in Kashmir since then, mostly with local recruits," he told DW.

"The sticky bombs would give a major boost to militant outfits that enjoy local support. At the same time," he added, "these bombs can be deadly."