Kashmir: Why is anger rising over secretive militant burials? | Asia | An in-depth look at news from across the continent | DW | 30.11.2021

Kashmir: Why is anger rising over secretive militant burials?

Families of militants killed by Indian forces are decrying a ban on returning the bodies. Authorities have cited COVID-19 and fears of new recruitment as reasons for burying those killed in remote border areas. 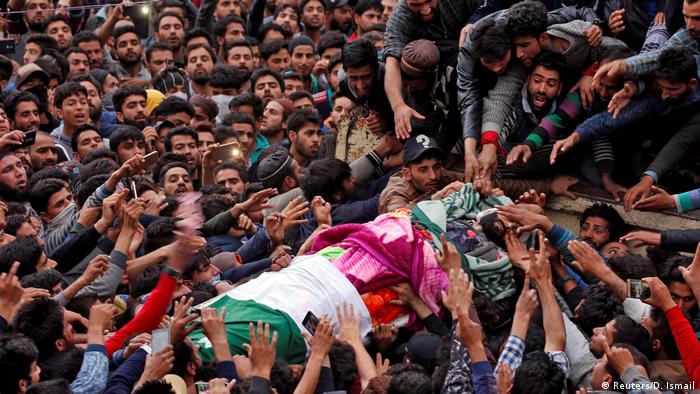 Mushtaq Ahmad Wani cried out for public support after Indian security forces refused to return the body of his teenage son, who was killed in a controversial operation on the outskirts of Srinagar, Jammu and Kashmir.

"Today it's about my son. Tomorrow it will be your son as well," Wani shouted while he was being taken away by Indian police during a protest at the Lal Chowk square in Srinagar, the region's summer capital.

On December 30 of last year, Wani's son, 16-year-old Ather Mushtaq, was killed along with two other local youths.

Mushtaq's body was buried by Indian authorities in northern Kashmir's Sonamarg area, nearly 150 kilometers (93 miles) away from his home in southern Kashmir. His father has been calling for the return of Mushtaq's body.

Hundreds of other families in Kashmir are also calling for the return of their relatives' bodies.

Eleven months after his son's death, Wani appeared in a video on social media, saying that the grave he had dug for his son at his ancestral graveyard was still empty.

"We are waiting for my son's body. Whenever anyone's son dies, that reminds us of our son. We request that authorities return his body," Wani said.

The video appeared amid protests in Kashmir over the killing of three people in an Indian security forces' operation at Hyderpora locality in Srinagar on November 15.

"Like three innocent civilians were killed at Hyderpora, they [the Indian military] also killed my son in a fake encounter. As long as I'm alive, I will continue my struggle for the return of my son's body," he said.

Since April 2020, Indian officials have not handed over the bodies of militants and civilians killed in anti-militancy operations in Kashmir to their families, citing COVID-19 restrictions.

They are instead buried in remote graveyards in border areas.  For the first time, last week, New Delhi gave into the protests and exhumed the bodies of two civilians, Altaf Ahmad Bhat and Mudasir Gul. They were both killed in a controversial encounter with security forces in Srinagar.

They were later buried in a distant graveyard in a border area of northern Kashmir's Handwara sub-district, over 130 kilometers away from Srinagar. Following widespread outcry over the event, the bodies were handed over to their families and buried in their ancestral graveyards.

On November 18, Indian parliament member and the region's former chief minister, Farooq Abdullah, wrote to Indian President Ram Nath Kovind to begin returning the bodies of those killed to their families.

The militant funerals would often attract huge crowds and trigger anti-India protests in Kashmir. Families and relatives would also shower flowers and sweets over their bodies before burying them in local graveyards.

A senior Indian security official told DW that the reverence extended to the dead militants during funeral processions, which were occasionally attended by active militants, could facilitate recruitment of youth into the militant ranks.

"The display of 'dignity in death' during the militant funerals would often attract young boys to militancy, and there was a need to break this cycle," he said.

According to a 2018 police study, half of the new militant recruits came from within a 10-kilometer radius of the residence of a dead militant.

"It has been observed that many a time, friends of killed militants manifest a tendency of pledging to join militancy on seeing the dead bodies and funerals of their friends," said the report, widely reported by Indian media.

"It's with the mass street turbulence that things started changing in 2008. Bodies of terrorists were then used to attract recruits to the cause, generate passionate radical fervor and separatist sentiments among the youth," said Ata Hasnain, a former commander of the Indian army's strategic Srinagar-based 15 Corps.

Meanwhile, Jammu and Kashmir's former director general of police, S P Vaid, echoed concerns over the impact of militant funerals, but said that the bodies of both civilians and local militants killed in gunfights should be handed over to their families.

"The bodies of local boys should be handed over to their families with the condition that only immediate relatives will attend their funeral. The processions should not be allowed," he said.

The inspector general of police in Kashmir, Vijay Kumar, described the decision to deny bodies of militants to their families as a historic step.

However, statistics reveal that the move has not actually curbed the recruitment of local youth into militant ranks.

In 2019, 126 local youth joined the militancy. The number rose to 167 in 2020, the second-highest in a decade, after New Delhi adopted the new policy of not returning the bodies of militants to their families.

On June 30, Indian security forces launched an anti-militancy operation at Chimmer village in southern Kashmir's Kulgam district. They said two militants and their associate, Zakir Bashir, 19, were killed during the operation.

Bashir's family said he was an innocent civilian and cricket player, who was picked up from his home while having lunch with his family.

"Zakir was having lunch at home when the Indian army and police took him away along with his elder brother. He was tortured to death while my elder son was released four days after being subjected to third-degree torture," their father, Bashir Ahmad Naikoo, told DW.

Shortly after the two were taken, Naikoo heard gunshots and firing in the village. Later that day, Naikoo said they came to know that Bashir had also been killed.

Naikoo alleges that the two militants killed in the village that day only had bullet wounds, while his son's body was "cut and mutilated."

Bashir was buried in the Rajwar forest area in northern Kashmir, nearly 160 kilometers away from his home. Only his immediate family was allowed to attend his burial.

"Half of my soul is buried in the Rajwar forests. If this government has any humanity left, they should return the body of my innocent son," he said.

Human rights lawyer Habeel Iqbal told DW that denying the bodies of militants to their families amounts to collective punishment to society.

Iqbal said that the act of not returning the bodies is in violation of Article 21 of India's constitution, "which guarantees dignity to the dead."

"It is also in violation of international humanitarian law," he added.