Fake news in India is a rising problem. The practice of using social media platforms like Facebook and WhatsApp to disseminate false information is ushering in a dangerous trend. Murali Krishnan reports from New Delhi. 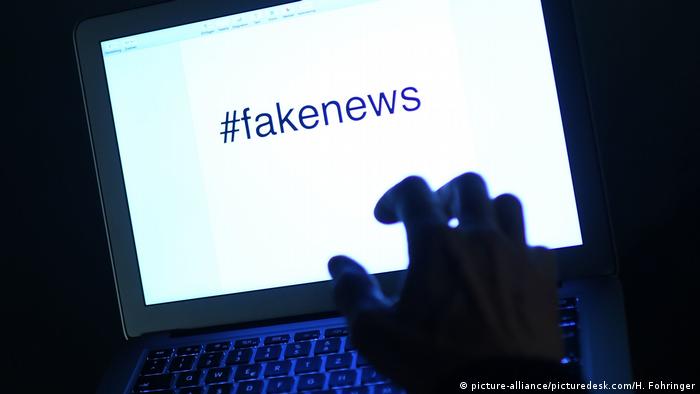 Real news and information is increasingly getting buried in an avalanche of false information and hoaxes, which are spreading like wild fire in India and creating rifts between various communities, castes and religions.

In recent times, there have been numerous instances of fake news misleading people, spreading false propaganda or maligning people as well as entire communities. The trend appears to be intensifying as Indians increasingly receive their news and information from social media.

Just last month, fake stories were weaved as the anti-Rohingya rhetoric on social media mounted, with photographs of children being misused in the divisive propaganda. The fresh outbreak of violence in Myanmar's Rakhine province since August has sparked a steady stream of provocative but nonetheless fake images.

In July, a rumor that a gang of men was supposedly abducting children in the central Indian state of Jharkhand was spread via WhatsApp. It soon mobilized a mob of several hundred people who ended up killing seven men. The rumor proved to be false and the slain men turned out to be innocent.

A few months back, pro-government websites and mainstream TV channels circulated a story saying Arundhati Roy, a renowned Indian novelist, had criticized the Indian army's heavy-handed presence in Kashmir, the disputed territory claimed by both India and Pakistan. The coverage prompted nationalist sections in society to lash out at Roy. But the truth about the statements, as Roy later clarified, was that she did not make those comments about India controlling Kashmir.

Last month, a shocking video did the rounds on social media showing a girl lying dead on the ground and another jumping from a balcony and ending up dead next to her sister. It was claimed to be from India. But it was later found that the sisters were from Indonesia and were suffering from depression after their mother's death in 2006.

"Trying to expose popular rumors and sniff out the creators of fake news articles which serve vested interests, is a trying business and what is worrisome is that it is creating social unrest," Pratik Sinha, the founder of Altnews, a news fact-checking website, told DW.

A few months back, the photo of a dead soldier went viral - with a message claiming that the body was that of a soldier, Tej Bahadur Yadav, who was in the news for his video complaining about the bad quality of food in the Border Security Force. After research, it was discovered that the image was from a Maoist attack in the central state of Chhattisgarh.

The problem is doubly compounded with the massive proliferation of internet connectivity in India. Studies show that there are now 355 million internet users in India, roughly 27 percent of the population. India now has the second highest number of internet users in the world after China.

A study by the Internet and Mobile Association of India and IMRB International, a market research firm, concluded that 77 percent of urban internet users and 92 percent of rural users consider mobile phone as the primary device for accessing the internet, largely driven by availability and affordability of smartphones.

"Some telephone companies offer free data to users with a data cap of 4 GB per day. This has forced other network providers to come out with competitive plans offering data at much cheaper rates. What we then see is an increasing trend of circulation of fake news and photographs," media commentator Hartosh Singh Bal told DW.

India is one of the biggest markets for several social media and communication companies - it has 160 million of WhatsApp's one billion-plus monthly active users, 148 million Facebook users and over 22 million Twitter accounts.

"There are two major factors driving this fake news surge. First is the trend of declining smartphone prices over the past couple of years. And, second is the fall in internet data prices. Rural consumers believe in almost anything," adds Sinha.

So what is the way forward to counter fake news?

"There needs to be greater vigilance and monitoring. Several political parties and corporate bodies have an army of anonymous purveyors of the net. They spread false information of targets that are real," Paranjoy Guha Thakurta, a social and political commentator, told DW.

Observers also say that news consumers tend to not read or watch anything that they do not agree with, and accept everything that goes with their beliefs at face value.

"I think it (fake news) will get bigger unless we develop solid technological tools to call the bluff. Every fake story has tell-tale signs and news outlets must use their discretion before putting it out in the public domain," Abhinandan Sekhri of Newslaundry, a digital news portal, told DW.

Knowing that the online fake news industry is well organized and those manning it are out to foment trouble, fact-checking websites that have emerged use Google search and reverse image search to check if images have been manipulated. Some also use Tineye, a dedicated reverse image search engine, which is another preferred tool to do the same job.

"I go through various algorithms to check sensitive content. It requires extensive online research and fact-checking to establish the source of false news," Pankaj Jain of SM Hoax Slayer told DW from Mumbai.

Both Sinha and Jain concur that apart from mainstream media using due diligence to verify fake news on social media, there should also be governmental intervention to check its spread.

"Government bodies at the rural level need to instruct rural folk of internet literacy. They consume all news and spread it without verifying. There has to be inbuilt internet tools to stop this," said Jain.

In recent times, individuals, companies and even governments have tried to spread misinformation and to manipulate public opinion and behavior through fake news and this was witnessed at the time of the Brexit referendum and the US presidential elections.

Gauri Lankesh murder - Indian journalists in the line of fire

The cold-blooded killing of a prominent journalist has exposed how dissent and debate has rapidly shrunk in India's mainstream media. The murder is another reminder of the climate of fear in which journalists operate. (07.09.2017)