How Indian and Pakistani media are covering Kashmir unrest | Asia| An in-depth look at news from across the continent | DW | 20.09.2016

India-administered Kashmir has been gripped by violent protests over the past couple of months, claiming tens of lives. DW examines how the unrest is being covered by media outlets in both India and Pakistan. 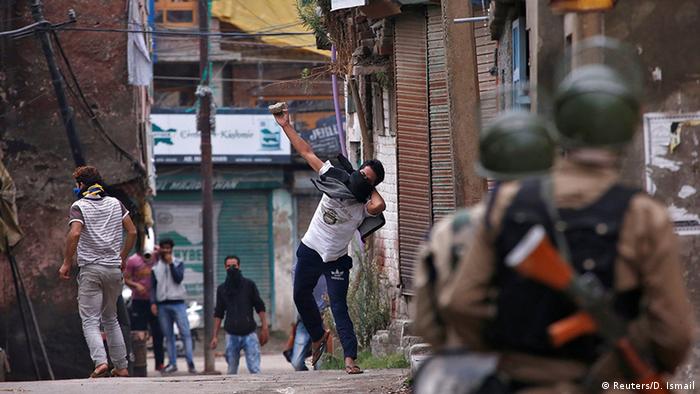 It was in the early morning of September 18 that four commando-style gunmen attacked an army base in India-administered Kashmir killing 17 Indian soldiers. An 18th soldier died in hospital later.

The deadly attack took place at a time when the unrest in the Muslim-majority region was making headlines all over the world. Indian Kashmir has been under a major security lockdown for over two months as a consequence of the massive anti-government protests that were sparked following the killing of a young rebel commander by government troops.

Immediately after the latest assault on the army base in Uri, located to the west of the state's capital Srinagar, India's top politicians started blaming Pakistan for orchestrating the attack. India's Interior Minister Rajnath Singh condemned Pakistan as "a terrorist state" and called for it to be internationally isolated. Many Twitter users from India echoed the same opinion.

It wasn't long before Pakistan rejected the criticism, saying that it's too early to blame someone without even holding a proper investigation into the attack.

However, it didn't stop mainstream media in both countries from joining the angry rhetoric with headlines like "Pakistani media's bizarre conclusions about Uri terror attack'' and "Uri is Pathankot-like Indian false flag operation.''

"On the whole, media in Pakistan and India are playing a very negative role and are basically warmongering for their respective governments," says Garga Chatterjee, a Kolkata-based commentator on South Asian politics. "Pakistani media is in denial mode while Indian media is in finger-pointing mode, both with absolutely no evidence to back up their claims," he told DW.

Basharat Ali, a blogger based in India-administered Kashmir, believes that media outlets in India and its arch-rival Pakistan have always been used by their respective governments to project official stances on the Kashmir conflict.

"For the Indian media, the problem in Kashmir is sponsored by Pakistan, a position taken by successive governments in India ever since the conflict began,'' Ali told DW.

"They always distort facts and obfuscate reality. When people watch falsehood being spread against them, their anger only multiplies," he added.

Indian newspapers, Ali said, also have a lot of correspondents in India-administered Kashmir while Pakistani newspapers are mostly dependent on news agencies as they don't have any reporters on the ground. "Pakistani media reports underline the growing human rights violations in Kashmir to attract global attention towards the problem. And that's precisely the position taken by the Pakistani government,'' the blogger noted.

Ever since the partition of India in 1947, Kashmir has remained as one of the major areas of conflict between the two nuclear-armed nations of South Asia. They have fought two of their three wars since the partition over the territory, which they both claim in full but rule in part.

India has accused Pakistan of orchestrating a deadly attack on its soldiers in Kashmir. The assault is likely to divert attention from anti-India protests in parts of Kashmir and highlight the foreign militancy issue. (19.09.2016)

Indian army officials say at least eight gunmen have been killed in the latest clashes along the disputed frontier with Pakistan. The violence follows a major attack on an Indian base on Sunday. (20.09.2016)

Kashmiri separatist is blocked from leaving India, and arrested

Khurram Parvez was due to report to the UN Human Rights Council in Geneva on the latest violence in Kashmir. However, authorities in India have hindered the activist from leaving the country. (16.09.2016)

"There are huge pro-independence demonstrations going on at different places in Kashmir, something Indian media won't show to its people or the world,'' he told DW, adding that "the media have allowed themselves become a veritable arm of the state and its military might.''

Umar pointed out that, despite being repeatedly attacked by the authorities, Kashmiri local media are doing a good job with regard to covering the unrest, which has been continuing for more than two months and killed over 70 people. "Mobile phone, landline and internet services remain curbed throughout the region and sometime ago police even raided newspaper offices, seizing thousands of printed copies.''

The Indian media's coverage of the Kashmir conflict has often been marred by controversy with a senior journalist of a major TV channel recently resigning after accusing the network of fabricating his reports on Kashmir. The reporter claimed that the channel had forced him to prepare biased reports favoring the Indian government's stance on Kashmir.

"We all know as journalists what the role of media should be in calming tempers, but it's no longer the case when it comes to the coverage of Kashmir by Indian media,'' Umar claimed mentioning the resignation of the Indian journalist.

Media analysts see a lack of fact-checking on the part of Indian and Pakistani newspapers when it comes to the Kashmir issue. They call on mainstream media outlets in both nations to play an active role in minimizing the ongoing unrest.

"Mainstream media should be cognizant of the fact that India and Pakistan are armed with nuclear weapons and should educate their audience about the hugely destructive effects of a nuclear conflict,'' Chatterjee stressed. "Media should critically examine claims made by their respective armies and governments. Truth and realism should drive public opinion, not jingoism.''

Internet users, as well as politicians of the two countries, have taken to Twitter to blame each other for the violence in Kashmir. As a result, hashtags like #UnitedAgainstPak and #FrustratedIndia are trending in the two nuclear-armed neighbors.

However, not everyone is joining the blame game on social media. After the attack on the army base in Uri, Omar Abdullah, former Chief Minister of Jammu and Kashmir, raised questions about the tents and huts used at the military base as it emerges that 14 out of the 18 soldiers killed were trapped in burning tents.

Abdullah believes the death toll could have been much lower if the army had been provided with flame retardant tents.

Some diplomats are tweeting on the issue as well with a bid to calm the unrest between the neighbors. Sherry Rehman, a former Pakistani ambassador to the US, tweeted against any possible military answer to the Uri attack. She stressed that war wouldn't solve anything.

But, for Basharat Ali, social media are something almost unreachable to bloggers and activists living in Kashmir at the moment as the mobile phone services there are blocked for more than two months. "Whatever is happening on social media is done by Kashmiris living outside Kashmir,'' he said.

The Indian government's decision to limit internet access in Kashmir has drawn widespread criticism on social media. Khurram Parvez, a Kashmiri human rights activist who was also active on Twitter, was arrested after being disallowed from attending a UN Human Rights Council meeting recently. And Facebook has been accused of removing posts on the unrest by prominent Kashmiri activists, analysts said.

"A Kashmiri boy was recently arrested and his bail denied for liking a post on Facebook, said Baba Umar, adding: "The Indian state and its forces don't want anyone to question their wrongdoings inside Kashmir. But despite restrictions, social media users, especially on Twitter, are offering a strong response to the statist narratives on Kashmir.''