How Cubans earn a living from standing in line | Business | Economy and finance news from a German perspective | DW | 13.04.2021

Unending lines in front of stores are a typical phenomenon in Cuban commerce. But, during an economic crisis that has led to shortages of basic supplies, some Cubans have made lining up a lucrative profession. 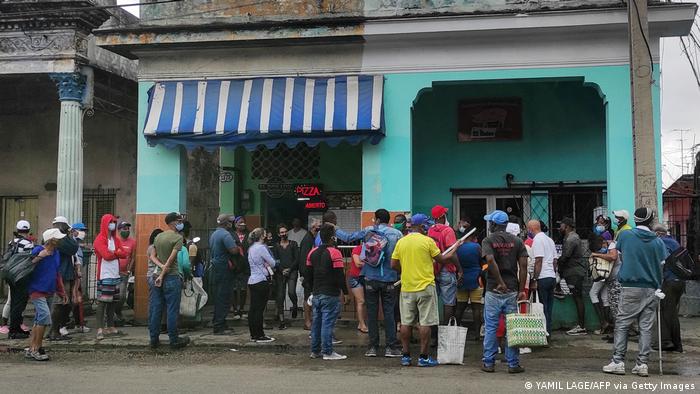 Shopping for groceries has long been a nightmare for most Cubans. Although buying basic food has slightly improved recently, Ricardo Barragan told DW that "everything is difficult" when it comes to providing his family with the fundamentals of daily life.

"If you want to buy chicken, it can well happen that you need to line up for seven or eight hours," he said, adding that 200 or 300 people lining up outside grocery stores is nothing unusual. 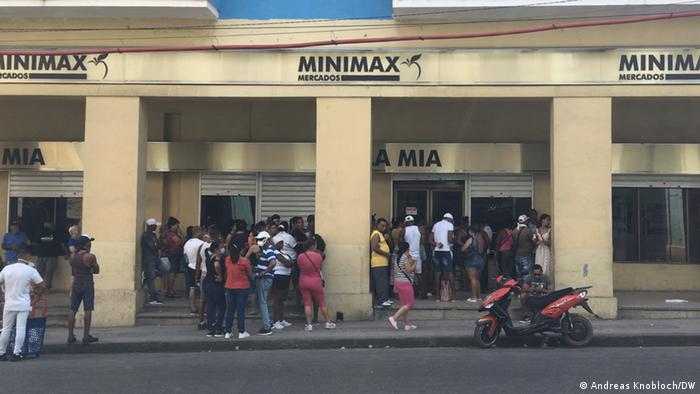 Like all protagonists in this article, Ricardo Barragan is not the real name of the 59-year-old Cuban, because none of them wanted to see their names published.

An artisan by profession, Barragan used to do arts and craftworks to earn a living. But since the COVID-19 pandemic hit Cuba, his market, mostly tourists, has crumbled, forcing him to do casual jobs to sustain his family. 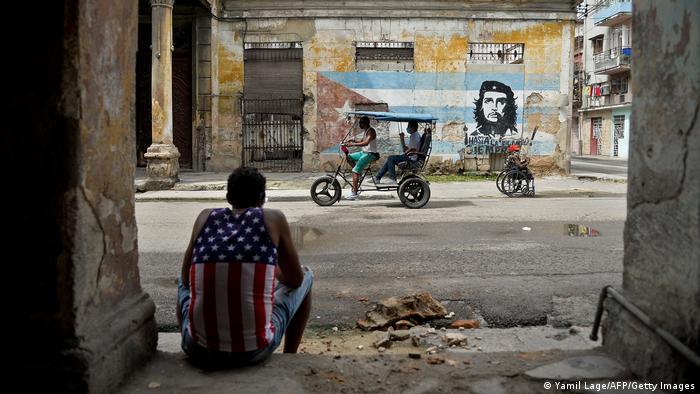 Hard currency: A must-have in Cuba

In Cuba, the virus pandemic has aggravated an already precarious economic situation marked by low growth and a widening financial crisis. Tourism as a main money spinner for the island's communist government has virtually collapsed and remittances from exiled Cubans have almost ceased to flow in the wake of tighter US regulations for money transfers to Cuba.

Earlier this year, the government in Havana tried to stem the economic decline with wage and price reforms, including a currency reform that scrapped the so-called convertible peso (CUC), leaving the nonconvertible Cuban peso (CUP) as the only legal tender.

As the freely convertible CUC has ceased to exist, the US dollar has become the currency of choice for both Cubans and their government. In October 2019, the communist rulers opened hard currency stores where you can buy household appliances and car parts with dollars. Since June last year, Cubans can also buy their groceries and sanitary products there provided they have a foreign currency account with a bank and a debit card.

At the same time, shops charging only in nonconvertible CUP are struggling amid falling supply — and as lines have been getting longer and longer, they've become graphic reminders of Cuba's worsening economic situation. "Today it's chicken meat, the next it's cooking oil — standing in line never ends," says Barragan. 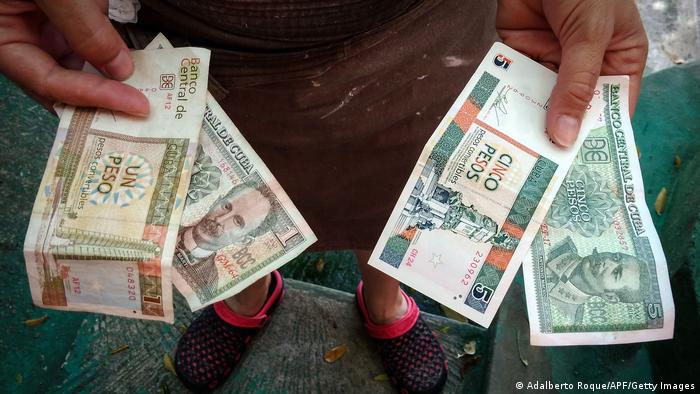 Cuba has decided to ditch the strong CUC (right) in favor of the weaker CUP. Now the US dollar is king on the island

Waiting for hours to be able to do your daily shopping is a hassle especially for the elderly. In times of a pandemic it is downright dangerous, increasing the risk of spreading the virus.

Since Cubans are used to dealing with economic hardship, some of them have turned a problem caused by the government into a private business model, becoming coleros by profession — people who provide others with a service in exchange for a remuneration.

The colero, which is the derogatory term used by the government, sells a place at the front of the line, which assures the buyer that he can get what he wants. But in order to formalize this transaction, the colero has to claim the space by spending the night outdoors in the line and sacrifice hours of his leisure time.

Marco Jimenz is a colero. He told DW that he once was employed at a state-run optometric laboratory where he earned 280 CUP ($11.67, €9.79) a month. He sometimes sold spectacle glass on the black market to improve his salary, he says, until he was laid off because "there wasn't any glass anymore and we were all sent home."

"We received salaries for another two months, and that was it." One day a friend had come up with the idea of standing in line for other people to earn some money, he told DW. 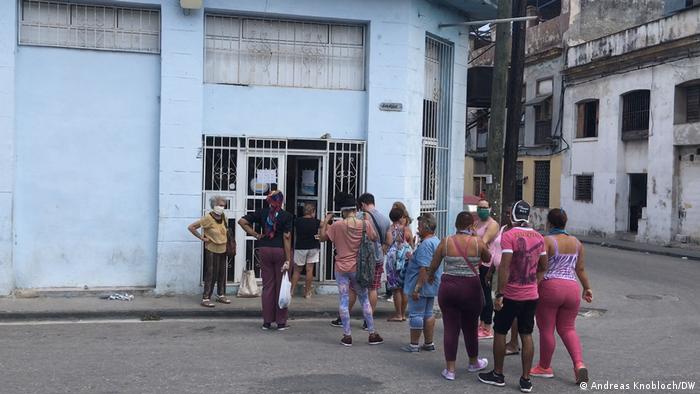 During the pandemic, social distancing rules require shopkeepers to allow only two people into their stores at the same time, further swelling the ranks of those waiting outside. A night curfew limiting opening hours had made matters worse, said Jimenez.

From 5 a.m. in the mornings, people are allowed to leave their homes, and the first thing they do is mark down their place in the line and leave again, he said.

"When the stores open at 9 a.m., they return to the marked spot, so that lines grow upfront. It can well happen that suddenly you find 70 people in front of you instead of the 10 who actually lined up when you came."

Reserving a place for someone else earns a colero 50 CUP per client, said Jimenez, which is quite a small income for the time they spend. This is why he's decided to buy the groceries himself and resell it for double the original price. "I buy chicken, minced meat, mayonnaise, spaghetti — whatever is available," he says, noting that about 80% of the coleros, meanwhile, are resellers. 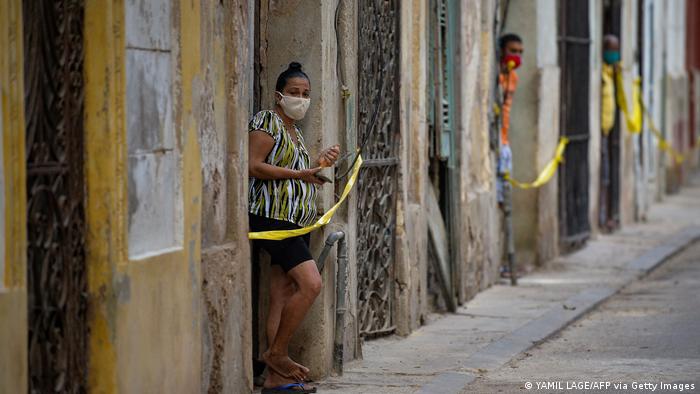 The communist rulers have imposed stiff fines to curb the practice of reselling basic food and sanitary products. Under a new law, shopkeepers are obliged to scan buyers' personal ID documents to prevent people from lining up twice or more times over.

Jimenez claimed that he only went on his shopping sprees "twice or three times a week maximum" to avoid raising the interest of the authorities. He's got a list of fixed clients that reduces the risk of getting caught, he said.

The job earns him between 750 CUP and 1,000 CUP a week — the equivalent of a little over $40 (€33). He had enough money to make ends meet, he said, given that a government job he started about two months ago added a little more to his overall income. He's been hired as a pesquisa — someone who knocks on people's doors to find out if quarantine rules and stay-at-home rules are adhered to.

However, all he's hoping for is to return to his former job as soon as possible. "Standing in the line at shops has helped him survive," he argued, but he's grown tired of doing it, and "won't miss standing in line" once these trying times are over.