How many currencies does Cuba need? | Business| Economy and finance news from a German perspective | DW | 07.10.2020

How many currencies does Cuba need?

Signs are growing in Cuba that currency reform, mooted for years, could be imminent and one of the two currencies circulating on the island will be abolished. One global hard currency has long dominated everyday life. 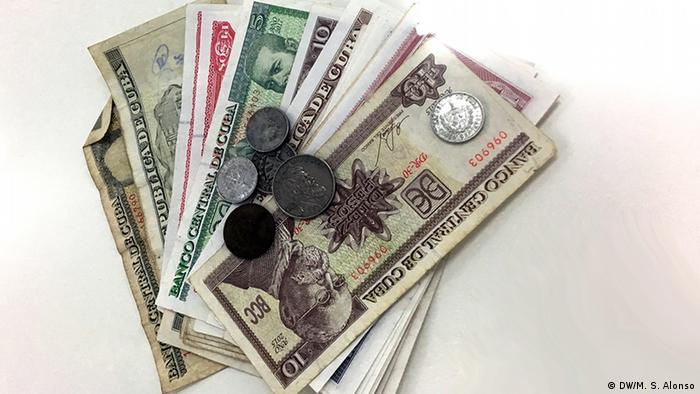 Havana residents last week welcomed the ending of a month-long coronavirus lockdown and night curfew. Such was the relief, you could have been forgiven for believing that a vaccine to protect against COVID-19 had finally been approved. A week earlier, the number of new infections dropped to an average of 21 per day.

Read more: Cuba joins the race for vaccine against the coronavirus

Restaurants were allowed to reopen at half capacity, beaches and swimming pools, along with theaters and cinemas, are now operating again and local public transport is running normally. However, another key decision that affects the daily life of Cubans is still pending despite seven years of debate: currency reforms.

Leaked audio recordings and documents, circulating on social media networks early last month, seemed to indicate that a change was imminent. The rumors gained traction so fast that Cuba's central bank was forced to deny "the alleged start of currency unification on October 1." It said if a decision was due, it would be communicated through official channels.

October 1st came and went but the convertible peso (CUC) remains the currency of choice on the island despite there being "many signs that monetary union is imminent," former University of Havana economist Omar Everleny told DW. In fact, the state media have been strikingly forthright about the topic in their recent coverage, and central bank experts underlined the necessity of so-called monetary union in the Communist Party newspaper Granma.

Since the mid-1990s, Cuba has had two currencies in circulation. First, the Peso Cubano (CUP), the national currency that most workers receive their wages in. Second is the so-called Convertible Peso (CUC), whose value is pegged to the US dollar, and is generally used to pay for more luxury items.  Often workers' bonuses are paid in CUC.

The official exchange rate between CUP and CUC is 24:1 but in reality, most state-owned companies and banks generally use a rate of 1:1. This double exchange rate, however, obscures real production costs and distorts, among other things, the proper value of investments. In October 2013, the Cuban government announced the abolition of the dual currency, however, the plans have been on hold ever since. 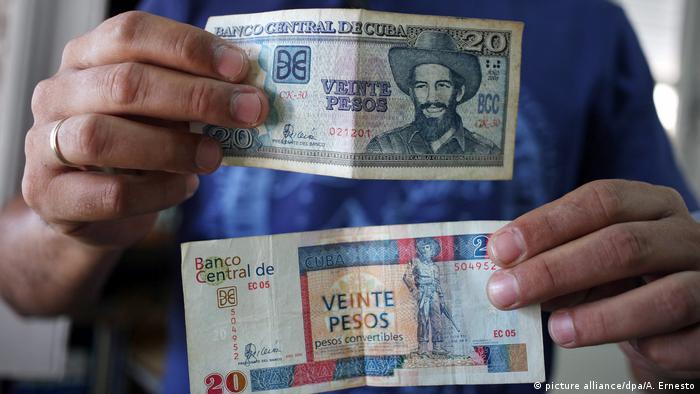 Parallel currencies: Peso Cubano (above) — and Peso Convertibile (below)

"When plans were made to abolish the CUC and leave only the CUP, the economic situation was not expected to be as uncertain as it is now," Everleny explains.

This year alone, the coronavirus pandemic has fueled a collapse in tourism, which along with tightened US sanctions, has cut the vital supply of foreign exchange income, leaving the country in a deep economic and supply crisis.

Read more: Cuba and the US: A love-hate relationship

To help raise urgently needed foreign currency, last year the government opened state-run foreign exchange stores, where everything from household appliances and auto parts could be bought in foreign currencies. In June, this was expanded to included food and toiletries.

Third currency — payment by card only

To buy from these stores, Cubans must have a giro card, which is fed with funds in hard currency transferred by friends or relatives abroad. The government calls them MLC (Moneda Libremente Convertible) stores — a third freely convertible currency. 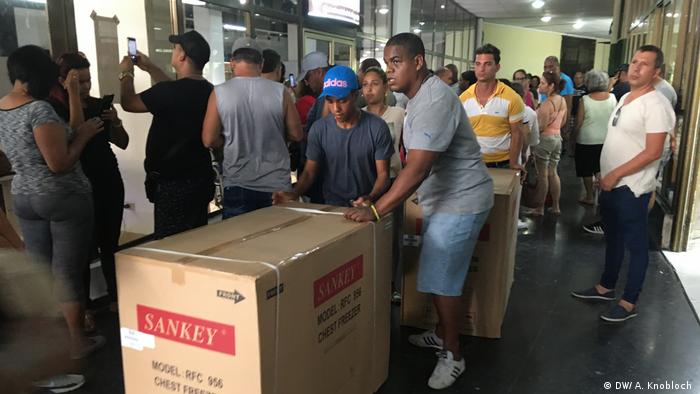 "It's an unequal measure," Everleny told DW, as not every Cuban has access to foreign currency. Nevertheless, he believes it is the right one. "Many of these US dollars would have gone abroad and been used to buy products in Mexico or Panama." Now they stay in Cuba.

"Once again, stores have been created where only a part of the population can shop," he says, remembering the US dollar stores that emerged in the 1990s when the Communist-run island was impacted by the collapse of the Soviet Union. But unlike then, there is now a separate banking system in US dollars. "The US dollar does not circulate in cash in any store, but only in the form of MLC by card payment."

At the same time, however, a foreign exchange black market has emerged and as a result, the CUC has lost value against the US dollar and the euro.

"US dollars in cash are increasingly being used to buy and sell assets, especially houses and cars," Cuban economist Ricardo Torres Perez of the Center for the Study of the Cuban Economy (CEEC) at the University of Havana, told DW.

At the moment, the supply of cash in US dollars is very limited, but it is hoped with the resumption of flights and foreign tourism, "fresh US dollars" will come into the country and the informal foreign exchange market will grow further, Torres Perez believes.

The dollarization of the retail trade does, however, mean there is no longer any reason to keep the CUC. The MLC has, in effect, introduced a new currency, even if it does not circulate in cash. Abolishing the CUC will not, therefore, mean the end of the two-currency system.

Everleny believes that the Cuban peso will soon be devalued, which will promote exports and make imports more expensive. "This means that prices will rise, as it will be more expensive for companies to buy products and this will be reflected in the final price." He expects wage and price reforms to quickly follow monetary reforms.

"The moment to implement the measure is now because the economic situation is so difficult that it is hard to imagine that it will improve in the coming months," Everleny says, adding at the same time that it's not just a matter of "abolishing the CUC, but of increasing wages, because prices will rise and subsidies will disappear."

Adapted from German by Nik Martin