Cuba joins the race for vaccine against the coronavirus | Business | Economy and finance news from a German perspective | DW | 19.08.2020

Cuba joins the race for vaccine against the coronavirus

Cuba has a lot of experience in vaccine research. The Caribbean island is currently working on one against the novel coronavirus while Russia is planning to have its own vaccine produced in Cuba. 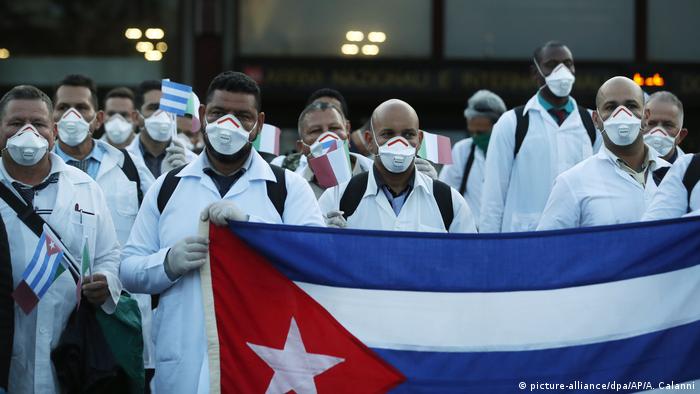 Up until recently, Cuba had handled the pandemic quite efficiently. However, over the past couple days, the Caribbean island has reported a rising number of people infected by the novel coronavirus.

This is why last week the government imposed a fresh lockdown for Havana. Restaurants and bars were closed again. Public transport ground to a halt and beaches were cordoned off. People believe that only an efficient vaccine against SARS-CoV-2 can bring long-term relief.

The head of epidemiology at Cuba's public health ministry, Francisco Duran, announced on Tuesday that his country was working on such a vaccine. "Finding an efficient vaccine to fight COVID-19 is a top priority for our science and innovation system," he told reporters in Havanna.

Rolando Perez, director of science and innovation at Cuban biotech firm BioCubaFarma added  that in the face of  the pandemic, Cuba now had two priorities: "To develop enough capacities for quick mass testing so as to be able to analyze the spread of the virus and develop specific vaccines to fight the disease in our country," he said.

The president of BioCubaFarma, Eduardo Martinez, said on Twitter that "a look at the nation's Finlay Institute showed how much progress could be made in this field in a very short time." The Finlay Institute is a state-run science center in Havana dedicated to research on and the production of vaccines.

Cuba no stranger to vaccine research

"Cuba produces almost 80% of the vaccines used within the national immunization program — there's the Finlay Institute plus a big technology and innovation sector we can fall back on," Jose Moya, the director for Cuba of the Pan American Health Organization (PAHO), told DW in a statement.

At CIGB, a center for molecular immunology and genetic engineering and biotechnology, Cuban scientists are currently working on four potential vaccines, with testing already in an advanced phase, state media report.

According to the director of biomedical research at CIGB, Gerardo Guillen, Cuban research is focused "on developing vaccines using virus-resembling particles that are potentially able to activate and strengthen people's immune system." Such vaccines, which are usually administered after infection, are known as therapeutic vaccines.

In an interview for DW, Guillen he cited as an example the therapeutic vaccine developed in Cuba meant to fight chronic hepatitis B. Globally, it was the first vaccine against a chronic infectious disease that was administered through the nose.

"Now that we're again talking about a respiratory disease [COVID-19], we believe that immunizing the mucous membranes may have the most efficient impact when it comes to neutralizing the virus," he says.

In contrast to many other developing nations, Cuba has a strong biotech sector and laboratories of its own. The experience that the nation has accumulated over the years in developing vaccines now comes in handy in research on SARS-CoV-2. And it makes the country interesting for cross-border cooperation. Guillen has pointed to joint research projects with the EU and China.

Media reports suggest that Cuba is among the group of nations that would be capable of jointly producing the coronavirus vaccine developed by Russian scientists, named Sputnik V. The announcement of the vaccine last week made a splash worldwide but has also drawn criticism as crucial phase III clinical testing was skipped. Cuba is not expected to risk the same, known as it is for strictly adhering to WHO regulations.

"Cuba has excellent abilities to produce vaccines," says the director of the state-owned Russian Direct Investment Fund (RDIF), Kirill Dmitriev. "We believe that Cuba can become one of the world's most important centers for the production of vaccines," he told DW.

According to Dmitriev, production of the Russian vaccine could start in Cuba as early as November, provided cooperation with the government and the companies involved will advance according to plan. The details of the deal have yet to be hammered out.

Cuban epidemiologist Duran warns that despite the announcement of the Russian vaccine and the progress made so far in research on SARS-CoV-2, an efficient vaccine will not be available in huge quantities anytime soon. "Let's remain realistic," he says, and adds: "For the time being," he added, "the only effective protection against the virus is to wear a mask and observe hygiene and distancing rules."