Hundreds of Hong Kongers have marched silently through the city's streets in protest against the looming national security legislation to be implemented by the mainland Chinese government. 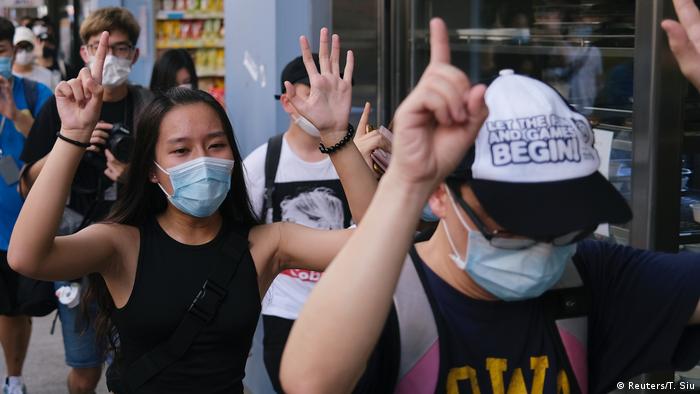 Riot police armed with shields were present on Hong Kong streets on Sunday as a crowd of demonstrators marched from Jordan to Mong Kok in the Kowloon district.

Police arrested more than 50 people after scuffles erupted during the "silent protest" march which went largely without the usual chanting or slogan shouting.

The protest was aimed at expressing Hong Kongers' anger over a national security law — imposed on the special administrative region by Beijing — that would ban subversion, secession, terrorism and foreign interference in the territory.

Critics say that the law could be used to crack down on dissent and criticism of Beijing. They say it would also threaten the "one country, two systems" framework following the handover of Hong Kong from the UK to China in 1997.

The event came a day after Hong Kong police refused permission for an annual march that is held on July 1 to mark the passage of the city from British to Chinese rule.

Police said a march would violate Hong Kong's current ban on groups of more than 50 people from gathering, a measure put in place as a result of the coronavirus pandemic.

On Sunday, China's top legislative body also met in Beijing for the first day of a three-day conference that is expected to expedite the passage of the new security legislation for Hong Kong before it concludes on Tuesday.

Details released on Saturday by the Legislative Affairs Commission of the National People's Congress reveal that the security legislation will supersede Hong Kong's constitutional document, the Basic Law.

The proposed law also allows for mainland security agencies to operate in Hong Kong, and calls for the establishment of a new police force and prosecutor's office to pursue national security cases, which will be tried by judges hand-picked by the chief executive.

Despite aggressively pushing the law, top Hong Kong leaders such as Chief Executive Carrie Lam have not seen a draft of the legislation and have been unable to answer questions from those concerned it will curtail Hong Kongers' civil liberties.

Justice Secretary Teresa Cheng told reporters earlier this month that she did not know details of the legislation beyond what had been reported in the press, and said "your guess is as good as mine," when asked when it would come into force.

Over the past year, Hong Kong has witnessed massive and often violent protests, with people taking to the streets to voice their concern over a later-withdrawn bill that would have allowed extraditions to mainland China.

Now, protesters have been turning up to oppose the proposed security law.

China to set up national security bureau in Hong Kong

The office will implement a new law aimed at cracking down on dissent, terrorism and "collusion with foreign powers." In addition, bodies in all Hong Kong government departments will be directly answerable to Beijing. (20.06.2020)