Pro-democracy protesters held a sit-in in the arrivals hall of Hong Kong's airport. City leaders have said they will not concede to protesters' demands. 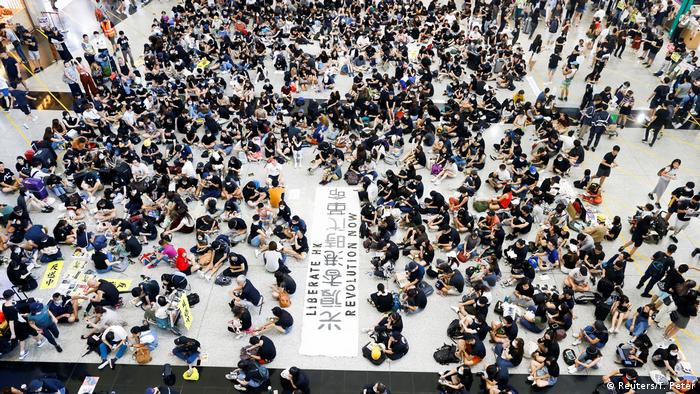 Around a thousand demonstrators staged a peaceful protest at Hong Kong Airport on Friday, handing out leaflets and carrying signs emblazoned with slogans in multiple languages aiming to build international support for Hong Kong's pro-democracy movement.

Mass demonstrations have gripped Hong Kong over the past two months, with millions of people taking to the streets in protests sparked by a controversial extradition bill, but which have evolved into a larger movement against the city's leadership.

"We have made stickers, banners in over 16 languages, ranging from Japanese to Spanish," one demonstrator told Reuters news agency at the airport on Friday. "We want to spread our message internationally. We are not rioters. We are a group of Hong Kong people fighting for human rights and freedom."

Many of this summer's protests have descended into clashes with police.

'No concessions' to protesters

More demonstrations are planned across Hong Kong this weekend, amid fears of continued violent confrontations between police, demonstrators and counterdemonstrators.

On Friday, Hong Kong Chief Executive Carrie Lam told reporters that the city's executive would not bow to protesters' demands, and that her priority was to prevent violence.

"As far as a political solution is concerned, I don't think we should make concessions in order to silence the violent protesters," said Lam. "At this moment what is right for Hong Kong... is to stop the violence, and to say no to the chaotic situation that Hong Kong has experienced in the last few weeks, so that we can move on."

The demands include full withdrawal of the extradition bill, the creation of an independent committee to investigate alleged police brutality during the mass protests over the past two months, and direct election of the city's leadership, which is controlled by Beijing. 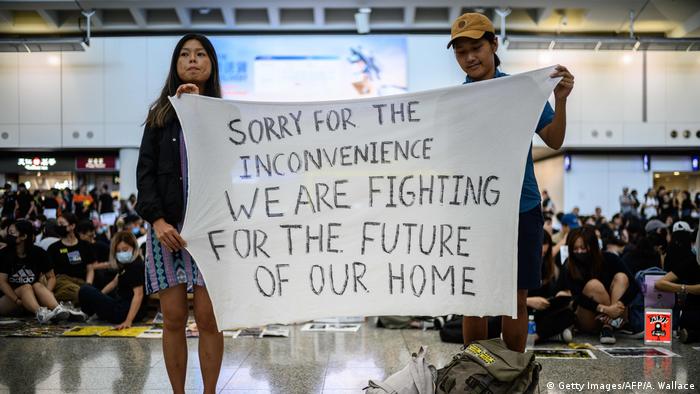 Protesters on Friday reportedly created signs in over a dozen languages

Lam also warned of economic consequences for the Asian financial hub on Friday, saying two months of nearly constant demonstrations were starting to have an effect. She said that business leaders were expressing concerns of long-term impacts in discussion with city authorities.

"This is not a cyclical downturn," said Lam. "The downturn is coming very quickly. Some people have described it as coming like a tsunami ... the economic recovery will take a long time."

Hong Kong's tourism bureau has also reported the number of tourists to Hong Kong has dropped in recent weeks; more than 20 countries have issued travel advisories.

Hong Kong protests: Is the government losing control of law and order?

After dozens of protesters were beaten by a mob at a train station, experts are warning that the escalating violence between opposing camps could become an ongoing threat to stability and the rule of law in Hong Kong. (22.07.2019)