Protesters should "say no to chaos," city leader Carrie Lam said in her first media appearance in days. Police said they had made a record 82 arrests after demonstrations held as part of a general strike turned violent.

Carrie Lam, Hong Kong's chief executive, vowed on Monday to maintain law and order on the day of a citywide strike that crippled parts of Hong Kong.

Protesters targeted the city's public transport during the Monday morning rush hour. At least seven railway lines were shut down as protesters blocked entrances to commuter trains. More than 200 flights were canceled at Hong Kong's airport and the airport's express train service was also suspended.

Several demonstrations descended into violence as police fired tear gas and clashed with protesters who are demanding Lam's resignation. A police spokeswoman told the German press agency dpa that a record 82 people had been arrested — the largest number of arrests in a single day since demonstrations began two months ago.

The city leader said the protests had caused the "majority of Hong Kong people" great "anxiety." Lam added that the "government will be resolute in maintaining law and order in Hong Kong and restoring confidence" and that now was the time to "rally together."

Read more: Hong Kong protesters: 'We will stand together and never give up' 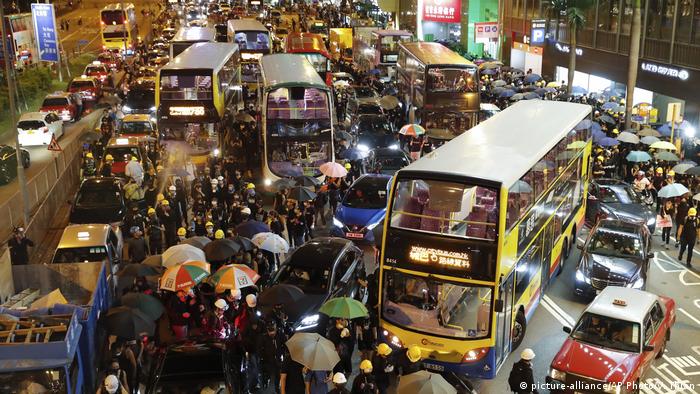 Lam's comments came after weeks of daily marches and protests that have often turned into violent confrontations between demonstrators and police.

The police spokeswoman cited by dpa said officers had arrested a total of 420 people, and fired 160 rubber bullets and 1,000 rounds of tear gas grenades since the protests began on June 9. More than 130 police officers have also been injured, she said.

Demonstrations initially stemmed from a controversial Chinese extradition law. However, they have since transformed into a protest movement calling for expanded democratic rights and further autonomy.

On Sunday, thousands of demonstrators had dressed in black and marched peacefully in the town of Tseung Kwan O.

According to organizers, at least 14,000 people from more than 20 sectors participated in the strike. Many protesters wore masks to hide their identities for fear of reprisal.

They demanded Lam's resignation, a permanent withdrawal of the extradition bill, the right to select leaders, an independent inquiry into police tactics, and the release of arrested protesters.