Hong Kongers have taken to the streets as part of a coordinated day of global protests aimed at casting a shadow over communist China's upcoming 70th birthday. Rallies were also held in Sydney and Taipei. 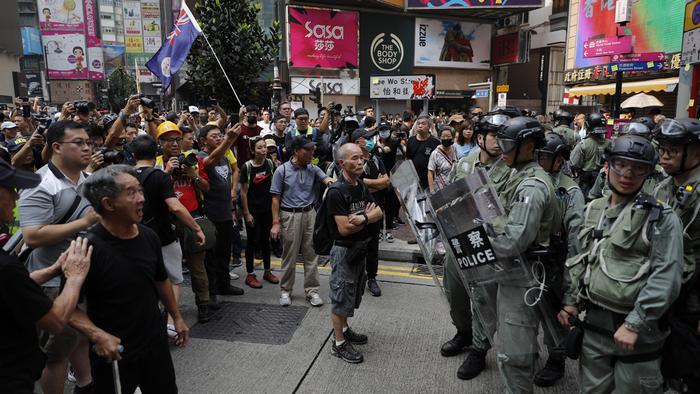 Thousands of Hong Kongers defied police tear gas rounds on Sunday to hold an unsanctioned march through the city in a second straight day of defiance, sparking fears of more violence ahead of China's National Day.

Protesters, many clad in black and carrying umbrellas and pro-democracy posters, sang songs and chanted "Stand with Hong Kong, fight for freedom" as they took over a stretch of road over 1 kilometer (0.62 miles) long and headed toward the government office complex.

A path was cleared along the route to allow supplies to be ferried to demonstrators at the front line of the protests. DW's Charlotte Chelsom-Pill tweeted from the scene.

As police fired tear gas, a water cannon sprayed blue dye laced with abrasive substances over a barrier around the buildings. While protesters threw rocks and petrol bombs, tactical police moved in from the side, taking the group by surprise.

As chaos ensued, groups of police with batons tackled protesters to the ground. Officers continued to kneel on the protesters even as they were subdued on the ground, many not moving and bloody from the skirmish.

The march in Hong Kong is part of a coordinated day of global "anti-totalitarianism" protests aimed at casting a shadow over communist China's upcoming 70th birthday.

More than 60 rallies have been planned in cities worldwide to denounce "Chinese tyranny." 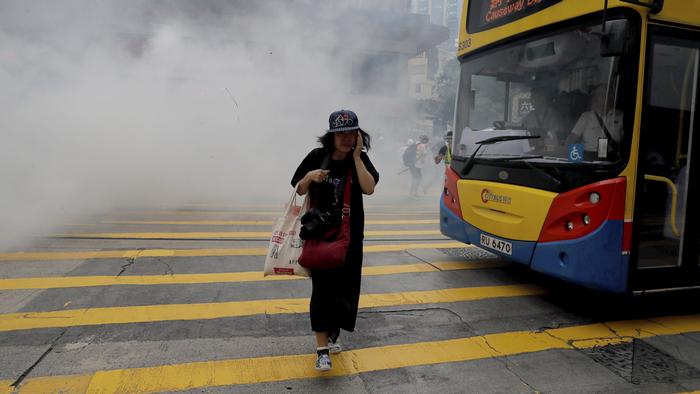 Rallies across the world

Thousands took part in the demonstrations in Sydney and Taipei to support Hong Kong democracy protesters.

Some Sydney protesters held signs that read "Save Hong Kong" and "Stop tyranny," while others carried yellow umbrellas or handed out paper cranes in scenes that played out in other major cities across the country Sunday.

Frankie Lo, 47, said he had lived in Australia for years but continued to care deeply about the situation back home.

"We still believe in one country, two systems, but they just have to follow the Basic Law," he said, referring to the legal code that underpins Hong's Kong's semi-autonomous status. "It's not about independence."

Some 2,000 people in Taipei, many of them dressed in black, braved torrential downpours and gathered outside parliament for the island's largest Hong Kong solidarity protest so far this summer.

Beijing is preparing for huge, tightly choreographed festivities from Tuesday marking seven decades since the founding of the People's Republic of China, including a huge military parade that will revel in the country's emergence as a global superpower.

But ongoing unrest in Hong Kong threatens to upstage those celebrations.

Hong Kong has been rocked by mass demonstrations over the past few months. The unrest was triggered by proposed extradition legislation, which would have allowed Hong Kongers on trial to be extradited to places including mainland China.

China has denied chipping away at Hong Kong's freedom and accused the US and other foreign powers of fomenting the unrest to weaken its dominance.