The latest pro-democracy protest comes as the People's Republic of China gears up to celebrate 70 years since the Communists took power. The next four days are expected to be tense and possibly violent. 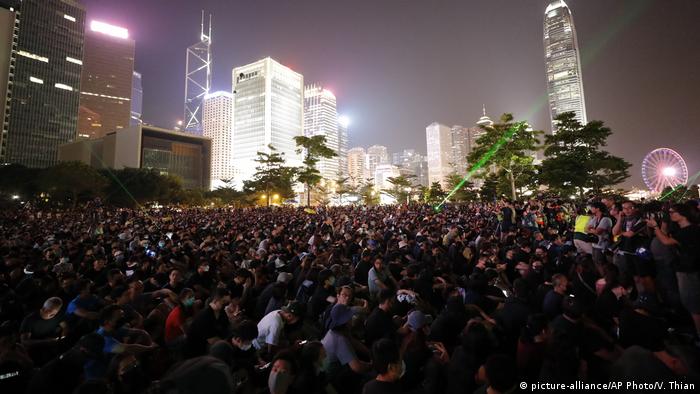 Tens of thousands of people gathered in central Hong Kong on Saturday to mark the five-year anniversary of the Umbrella Movement, which called for democratic reforms in the Chinese-controlled territory.

The peaceful demonstration at Tamar Park was approved by authorities, but security was tight around nearby government buildings and the Legislative Council, which have been the target of sometimes violent protests that have rocked Hong Kong over the past three months.

Police fired tear gas and water cannon at a small group of black-clad protesters wearing masks and goggles as they threw bricks and Molotov cocktails at nearby government offices. Police said "violent protesters" had damaged property outside the buildings. Elsewhere, around 1,000 protesters blocked a main road around government buildings.

The pro-democracy protest comes ahead of what is expected to be a tense period as the People's Republic of China celebrates the 70th anniversary of its founding on Tuesday.

A series of protests in support and against Communist Party rulers in Beijing are planned around the anniversary, with clashes almost certain after police denied an anti-government march on Tuesday.

The rolling protests against Beijing initially started over a now-scrapped Hong Kong plan to allow extraditions to the authoritarian mainland. They have since morphed into a broader show of anger at what pro-democracy groups describe as growing Chinese interference in Hong Kong and the erosion of the "one people, two systems" formula guaranteeing special rights for the city after it was handed over from Britain to China 1997.

The 79-day Umbrella Movement occupation ended without democratic reforms, but it is viewed as setting the foundation for the massive protests currently engulfing the finance hub.