Prominent pro-democracy activist Joshua Wong has revealed plans to contest local elections in Hong Kong. His announcement comes ahead of a major rally to mark the fifth anniversary of the Umbrella Movement. 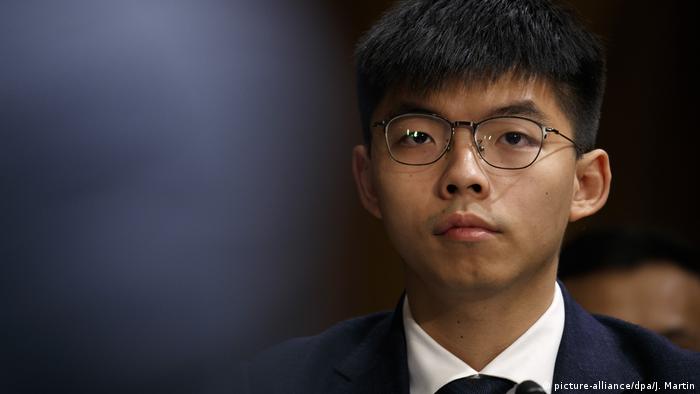 Hong Kong activist Joshua Wong on Saturday announced plans to contest local elections and warned that any attempt to disqualify him would only increase support for pro-democracy protests in the territory.

His announcement came ahead of a major rally later Saturday to mark the fifth anniversary of the Umbrella protests, where he first shot to fame as a youth leader.

"I will join the protest assembly tonight, during this weekend and also during October 1," Wong told reporters. "It's time to let Emperor Xi [Chinese President Xi Jinping] be aware that now is our battle.... We stand in solidarity, we stand as one," Wong said.

Wong said the vote is crucial to send a message to Beijing that the people are more determined than ever to win the battle for more rights. "The battle ahead is the battle for our home and our homeland."

Wong, 22, is currently on bail after being charged with inciting and participating in an unauthorized assembly outside police headquarters on June 21.

Hong Kong has been rocked by mass demonstrations over the past couple of months. The unrest was triggered by proposed extradition legislation that would have allowed Hong Kongers on trial to be extradited to places including mainland China.

In more than three months of unrest, the protesters have attacked the legislature and Beijing's main Liaison Office, occupied the airport, thrown petrol bombs at police, vandalized metro stations and set street fires.

Protests are also expected in Hong Kong on Sunday to mark Global Anti-Totalitarianism Day, with solidarity events planned in cities across the world, including Paris, Berlin, Taipei, New York, Kyiv and London.

But the biggest protests are likely to be on October 1, marking the anniversary of the founding of the People's Republic of China in 1949.

Protesters plan a major march downtown, sparking fears of a bloody showdown that could embarrass China's ruling Communist Party as it marks its 70th year in power with grand festivities in Beijing. Pro-Beijing groups have also vowed to come out, adding to the tension.