Filmmakers will now be vetted to ensure their films do not criticize mainland China. Effective immediately, the move signals a further choking of expression by Beijing. 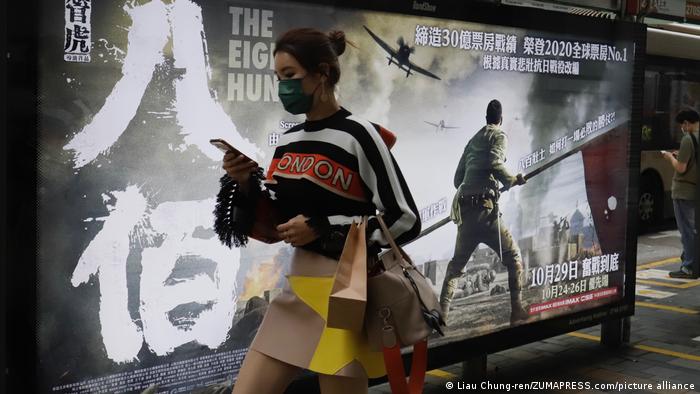 Chinese censors have had a heavy hand with culture in Hong Kong; now, an iron fist with the arts

New censorship guidelines go into effect for Hong Kong's film industry Friday as the government there seeks to assist Beijing in rooting out any anti-China sentiment.

The Government of the Hong Kong Special Administrative Region announced that censorship guidelines on the island had been expanded to cover "any act which may amount to an offense endangering national security."

"When considering a film as a whole and its effect on the viewers, the censor should have regard to his duties to prevent and suppress acts or activities endangering national security, and the common responsibility of the people of Hong Kong to safeguard the sovereignty, unification and territorial integrity of the People's Republic of China," read the new guidelines, which went into effect immediately.

The new measures are the most recent attempt to purge the semi-autonomous island of any and all dissent since it was rocked by months of violence following passage a new national security law in 2019.

In addition to the controversial national security law, Beijing and the Hong Kong Legislative Council (LegCo) also recently passed an electoral reform law. This limits access to seats in Hong Kong's city parliament to "patriots" whose loyalty to the mainland has been vetted by Beijing.

Authorities have also begun clamping down on cultural expression. Initial steps have included the closing of exhibitions dealing with pro-democracy protests.

Recently, coverage of this year's Oscars was also blocked — as was any news of Chinese-born Chloe Zhao, who won both best film and best director awards for "Nomadland," which was censored in China.

"Do Not Split" was also part of the blocked ceremony, and has been kept off screens in China and Hong Kong. An Oscar-nominated documentary about the city's pro-democracy protests by Norwegian filmmaker Anders Hammer, the film was banned on the grounds that its content breached the new national security law.

Hong Kong has a rich cinematic history that has had great global influence, for instance introducing martial arts to Western audiences in the 1970s and becoming a springboard to Hollywood for directors and actors who became cult heroes in the 1980s and 1990s.

Today, the island still maintains a number of important studios, is home to respected directors and also has a thriving independent scene. Despite all that, big-budget blockbusters from China and South Korea now dominate the Asian market.

The Hong Kong Film Censorship Authority has traditionally taken a more relaxed attitude toward censorship than Beijing, which strictly limits the films it allows to be publicly screened.