Pro-democracy activist Joshua Wong said he would be a "prime target" of a national security law passed by Beijing. The group has since disbanded over fears of the secretive law. 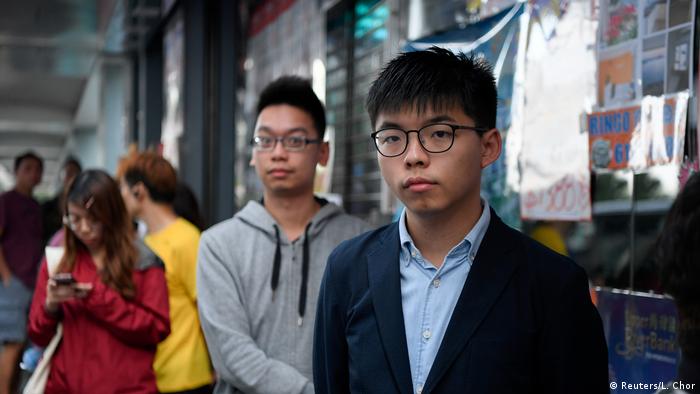 Hong Kong activist Joshua Wong on Tuesday announced he is stepping down as leader of his pro-democracy group Demosisto, hours after reports emerged that Beijing has passed a controversial national security law on the territory's behalf.

The group announced later that it would dissolve over the new law.  "After much internal deliberation, we have decided to disband and cease all operation as a group given the circumstances," Demosisto said on Twitter.

Wong, 23, had previously said he would be a "prime target" of the law, which critics say infringes on Hong Kong's autonomy and could be used to quash dissent.

In an announcement of his withdrawal on Twitter, Wong wrote, "If my voice will not be heard soon, I hope that the international community will continue to speak up for Hong Kong and step up concrete efforts to defend our last bit of freedom."

He added that he would not, however, be leaving Hong Kong. Demosisto has consistently riled Beijing by campaigning for universal suffrage and for foreign countries to sanction China for rights abuses. Activists like Wong, who has previously been jailed for his activism, are also regularly labeled as "separatists" in Chinese media.

Wong described the law as "ill-defined" but carrying sweeping powers, and warned it would turn Hong Kong into a secret police state.

"It marks the end of Hong Kong that the world knew before," he tweeted.

Demosisto members Nathan Law, Agnes Chow and Jeffrey Ngo had also said they were stepping down from the group.

"The struggle of Hong Kong people will not stop, it will only continue in a stronger gesture ... Guard my city until the last minute," Law wrote in a Facebook post on Tuesday.

Wong, Chow and Law have all previously been banned from seeking election and holding elected office in the territory, based on accusations of support for self-determination for Hong Kong. However, both Wong and Law intend to run for Hong Kong's Legislative Council election in September.

The city's partially-elected legislature is expected to take on a pro-China majority, but pro-democracy parties hope to win most of the chamber's electable seats.

The precise wording of the security law remains secret, but China has said it will outlaw subversion, secession, terrorism and collusion with foreign forces.

Beijing has argued that the legislation is needed to return stability to Hong Kong after a year of pro-democracy protests, and says that only a small minority of people will be targeted — especially those promoting separatism.

China is also expected to set up a national security office in Hong Kong for the first time, and could exercise its jurisdiction on certain cases.

The law is expected to take effect on July 1 — the 23rd anniversary of Hong Kong's return to China after over 150 years of British rule.