Home away from home: Recep Tayyip Erdogan in Sarajevo

Turkey's Recep Tayyip Erdogan is set to appear at a large rally in Sarajevo, the capital of Bosnia-Herzegovina. Bosniak leaders are eager to welcome the strongman, who portrays himself as the protector of Balkan Muslims. 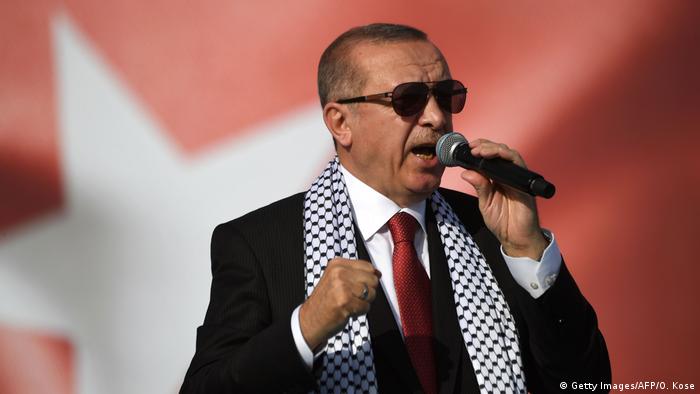 Hotels in Sarajevo are overbooked ahead of Sunday's visit by Turkish President Recep Tayyip Erdogan. Officially, the charismatic leader is coming on a working visit to Bosnia-Herzegovina, but he also plans to speak at a political rally organized by the pro-Erdogan Union of European Turkish Democrats.

Erdogan's supporters are expected to arrive from all parts of the Balkan country. Many more are traveling from Germany and other EU states to attend the speech at downtown Sarajevo's Zetra venue, which can hold around 20,000 visitors.

The president aims to inspire Turkish voters abroad to support his Justice and Development Party (AKP) in a snap general election on June 24. By ensuring a fresh mandate, Erdogan hopes to seal constitutional changes approved in a 2017 referendum that grant the presidency unprecedented powers.

Erdogan's appearance on Sunday also serves as strong signal to EU leaders, who have repeatedly sought to limit his campaign activities within the bloc. Though Germany and Austria have banned him from campaigning in their countries, the Turkish president managed to cash in on his popularity in Bosnia and go around the block to reach his supporters in person.

Sarajevo offers Erdogan arguably the friendliest crowd that he could find abroad. To this day, Bosnia and Turkey share similar customs, architecture and religious heritage from the centurieslong Ottoman occupation of the region.

Many Muslims in Bosnia see Turkey as their protector power on the world stage and Erdogan as a big brother who will fight for their side. Erdogan has worked to build up this image and used the suffering of Bosniaks during the wars of the 1990s as a rhetorical argument against the West.

Erdogan is a personal friend of his host in Sarajevo, Bakir Izetbegovic, who shares power with a Serb and a Croat in multiethnic Bosnia-Herzegovina's tripartite presidency. Izetbegovic publicly parades his relationship with the Turkish president, calling him "brother" and even attending Erdogan's family celebrations in Turkey. In a poor and divided Balkan country, closeness with a such a charismatic leader helps cement Izetbegovic's grip on power.

"Balkan peoples have a desperate need for leaders, individuals who strongly represent the interests of their groups, so viewing Erdogan as new sultan is a good sustenance for the souls of those who cannot solve everyday problems in their communities," Zibija Sarenkapic, a Bosniak activist and the executive director of Serbia's DamaD cultural center, told DW.

Backed by Turkish money, local NGOs offer IT courses or lessons in English or German, but all of it "with a Turkish, Muslim slant," Sarenkapic said.

"In these areas, in the last seven years or so, Turkey's presence is stronger than the combined presence of all the EU members put together," she added.

Turkey is also promoting its culture through films and TV shows — most notably the soap operas that have become commonplace on TV stations across the Balkans in the past decade. This year, Turkish state television started airing a TV show about the life of Alija Izetbegovic, the father of the current Muslim leader. The late Alija led the nascent Bosnian state during the breakup of Yugoslavia and remained the dominant politician in the country until his death in 2003.

Soon thereafter, Izetbegovic publicly stated that his father had met with Erdogan shortly before his death and urged Erdogan to take care of the country.

Read more: Germany and the long arm of Turkey's AKP

Erdogan's scheduled visit to Sarajevo has already raised many eyebrows in Brussels. Despite close cultural ties with Turkey, Bosnia remains heavily dependent on EU money and politicians say their goal is to one day join the bloc.

Brussels has been struggling to counter Turkey's expansion in the Balkans, where companies are starving for investments and strong leaders like Erdogan are on the rise.

Not everyone on the streets of Sarajevo was enthused by the prospect of a foreign head of state coming to campaign on Bosnian soil.

"If we had a proper country, we would not have a president of another country coming to our capital to hold a campaign rally," Vojko Matovic, a technician, told a reporter for DW's West Balkan service.

As buses pour into Bosnia's capital and the city prepares to welcome Erdogan, many others are sure to be irritated, as well. Thousands of people, however, will rush to see their idol up close on Sunday. And that is exactly what Erdogan seeks on his visit to Sarajevo.

The referendum would create a Serb national holiday that is at odds with Bosnia's Catholic and Muslim communities. With more than 70 percent of the vote counted the result seems assured as 99.8 percent voted in favor (26.09.2016)