French President Francois Hollande has expressed support for Germany's call for a common European policy on asylum. He also echoed Angela Merkel's condemnation of the anti-refugee violence in Heidenau. 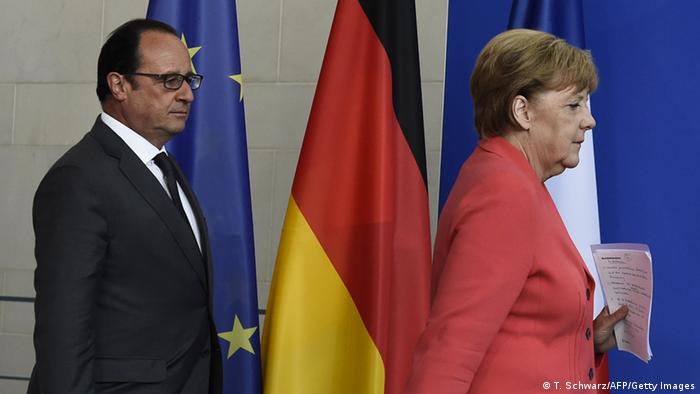 Speaking prior to his meeting with German Chancellor Merkel in Berlin on Monday, Hollande said that the current wave of migration from conflict areas in the Middle East into the European Union required a coordinated response by the 28-member bloc.

"We must put in place a unified system for the right to asylum," Hollande told reporters. He also described the influx into the EU from places like Syria and northern and western Iraq as "an exceptional situation that will last for some time."

"Rather than wait, we should organize and reinforce our policies, and that is what France and Germany are proposing," Hollande said.

Chancellor Merkel had first drawn attention to the need for a common EU policy on refugees more than a week ago, before her deputy chancellor, Economy Minister Sigmar Gabriel, and Foreign Minister Frank-Walter Steinmeier made the idea part of a 10-point plan, which was published in the "Frankfurter Allgemeine Sonntagszeitung" on Sunday.

Merkel and Hollande also called on the EU to agree on a common list of "safe countries of origin," something that is meant to help speed up the return of migrants not in need of protection from conflict or political persecution.

The French President also echoed Merkel's condemnation of the right-wing violence that occurred outside a shelter for asylum seekers in Heidenau in eastern Germany over the weekend, saying that there was no circumstance so grave as to "justify these acts." 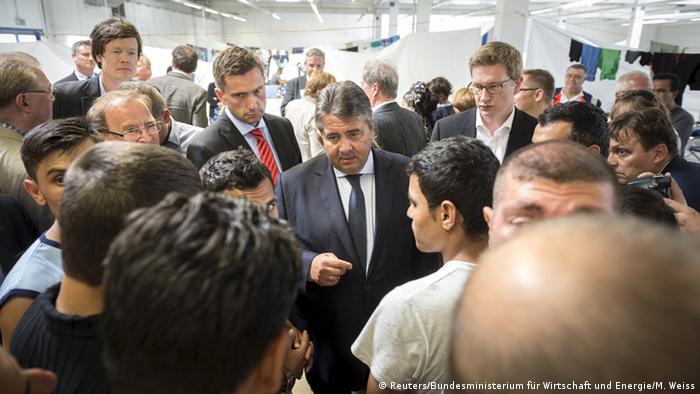 Earlier on Monday, the chancellor described the events that occurred in the town near Dresden as completely unacceptable.

"I condemn in the strongest possible terms the violent outbursts," the chancellor said, adding that "it's equally shameful how citizens - even families with children - support this by marching along."

At the same time, Hollande said that the events in Heidenau showed what sort of "tensions can build up" in a country taking in a growing number of refugees - underlining the need for a common EU policy.

Germany is expecting to receive around 800,000 refugees by the end of this year.

After their bilateral meeting, Merkel and Hollande were joined by Ukrainian President Petro Poroshenko to discuss ways to maintain a fragile ceasefire in eastern Ukraine and to consider possible steps to end the 16-month-old conflict.

The chancellor expressed concerns about reports that the work of monitors from the Organization for Security and Cooperation in Europe had been disrupted.

"The OSCE has to be able to monitor the conflict, but there have been attacks and its monitors' movements restricted. Its drones have not been able to fly because of repeated disruptions," she said. "Their ability to do their jobs is paramount" to the Minsk ceasefire agreement reached in February, she added.

President Vladimir Putin of Russia, who has also been involved in the so-called "Normandy format" process along with Germany, France and Ukraine, was not present in Berlin, but the chancellor said he had been consulted via telephone.

Earlier in the day in Kyiv, Poroshenko had used an independence day speech to accuse the Kremlin of sending more military aid to pro-Russia separatists in eastern Ukraine.

German states are asking for more federal funds and looking at ways to help to deal with rising numbers of refugees. DW examines some of the most frequently asked questions on the country's processes for asylum seekers. (28.07.2015)