Hindus fear for their lives after Pakistan blasphemy riots | Asia | An in-depth look at news from across the continent | DW | 16.09.2019

Communal riots have erupted in Ghotki, a southern Pakistani town, after a charged mob attacked a school due to blasphemy accusations against its Hindu principal. Blasphemy is a sensitive issue in the Islamic country. 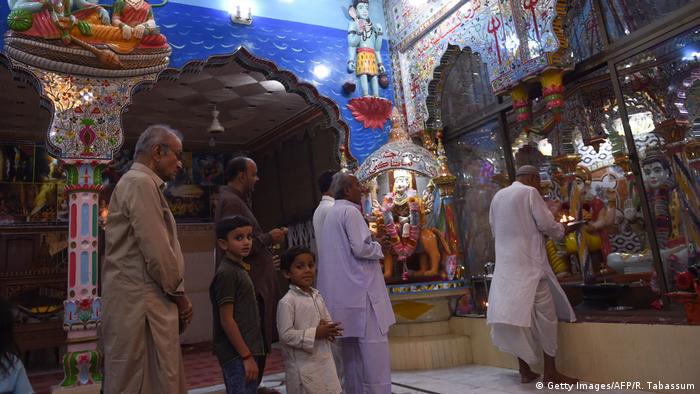 Violent protesters attacked a school on Sunday after a blasphemy case was filed against Nautan Lal, principal of the Sindh Public School.

Abdul Aziz Rajput, a student's father, complained to the police that Lal had insulted Islam.

Blasphemy, which is punishable by death in Pakistan, is a sensitive topic in the country, where 97% of its 180 million inhabitants are Muslim.

Rights activists have demanded reforms of controversial blasphemy laws, which were introduced by the Islamic military dictator General Zia-ul-Haq in the 1980s. Activists say the laws have little to do with blasphemy and are often used to settle petty disputes and personal vendettas.

Hindus locked inside their homes

Ghotki, a small town in southern Sindh province, has a considerable population of Hindus, who have been living there before the partition of British-ruled India in 1947.

Sindh province is known for its mystical ethos, where Hindus, Sikhs and Christians have coexisted with Muslims for centuries. But in the past few years, extremism has gripped the region, with hardline Muslim groups attacking temples and forcing Hindus to convert to Islam.

The riots in Ghotki have forced the Hindu community to remain indoors, as authorities have deployed police forces in the city.

Jaipal Chhabria, the president of the Pakistan Hindu Forum, told DW that the Hindu community in Ghotki feels more insecure after the riots.

"Nautan Lal only scolded a Muslim boy for not completing his homework. The boy accused him of blasphemy and that triggered violent protests in the city. The Hindus in the area are frightened and have locked themselves in their houses," Chhabria said.

Chhabria claimed that a local religious leader and his supporters were involved in the Sunday school attack.

The school principal and his family have reportedly gone into hiding, fearing mob attacks.

"How can they live in Ghotki anymore?" said Rajesh Kumar, a Ghotki resident. "Once a person is accused of blasphemy, they cannot live in that area. In the past, mobs have killed many people on blasphemy allegations."

Some reports say the police have taken the principal into custody and moved him to an undisclosed location due to security concerns.

Rights activists have demanded the provincial government protect the Hindu community in Ghotki.

Hari Lal Bhagia, the secretary-general of the Upper Sindh Hindu Panchayiat, told DW that the authorities are trying to restore peace in the area. "But these extremist groups are quite powerful, and even the government looks helpless. That is why the Hindu community in the area feels even more vulnerable to attacks," Bhagia said.

But Sajjad Ali Soomro, a local rights activist, said that the indifference of state authorities has emboldened extremist groups in a province that used to be a beacon of religious harmony in the country.

"On Sunday, hundreds of people gathered outside the police station and later started attacking Hindu houses, businesses and temples. The authorities did not intervene," Soomro said.

Haider, however, insists that the provincial government is not to be blamed for religious disharmony in the area.

"We handed over a list of 300 religious seminaries that have been propagating hatred and extremist ideas to the federal government, but it did not take any action against these elements," he told DW.

Hindus make up around 2.5% of Pakistan's population. The majority of them, over 90%, live in Sindh.

There have been reports that the number of Hindus migrating to neighboring India has increased in recent years.

Read more: Minorities fear for their lives in Pakistan

Pakistan's Christians, and other religious minorities, have often complained of legal and social discrimination in their country.

Asia Bibi, a Christian woman who spent years on death row in Pakistan on a blasphemy charge, left for Canada to join her family in May. Bibi and her family had to stay in hiding even after she was acquitted by the country's Supreme Court in October 2018.

Recently, Baldev Kumar, a former legislator from Prime Minister Imran Khan's Pakistan Tehreek-e-Insaf (PTI) party, sought asylum in India for himself and his family. The 43-year-old politician alleged that Pakistan is an "unsafe country" and that the Imran Khan-led government mistreats minorities there.

In the past few years, many Christians and Hindus have been brutally murdered over unproven blasphemy allegations.