Pakistan's top court has upheld its decision to acquit Asia Bibi of blasphemy charges, but the grave injustice that kept the Christian woman in prison for almost a decade demands introspection, says DW's Shamil Shams. 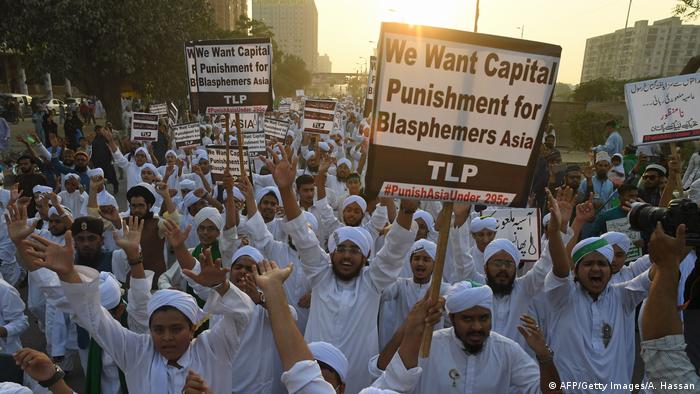 The Supreme Court's decision on Tuesday to dismiss an appeal against Asia Bibi's acquittal is commendable. The top court judges have shown immense courage in their decision to uphold their October 31, 2018, verdict that freed the impoverished Christian woman from a decade-long incarceration.

It was not an easy decision, let's be fair. We are aware of the sensitivity surrounding the blasphemy issue in Pakistan. Two top politicians in Pakistan had been murdered in broad daylight for speaking in Bibi's favor. There are many examples of violent mobs lynching alleged blasphemers. Lawyers and judges supporting blasphemy victims are openly threatened by extremists. Then there are religious groups that use blasphemy laws to gain more political clout. Therefore, the credit for Bibi's "freedom" definitely goes to the judiciary.

We must also not forget that the nature of the blasphemy case against Bibi was not just legal; it involved a number of political issues, mainly the executive's incapacity to rein in Islamists and deviate from the state's ultra-Islamic narrative. Pakistani lawmakers have shied away from tackling the controversial blasphemy laws that have resulted in brutal murders and countless imprisonments in the past two decades. Politicians have always tried not to confront Islamists, who have immense street power to paralyze the country, as we have seen in the past.

Prime Minister Imran Khan's six-month-old government will be maligned by the religious right for the court's decision, but the cricket star-turned-politician has shown a great deal of commitment in upholding the rule of law. It surely clears some stains from his government's November 2018 deal with Islamists that allowed the review petition against Bibi's acquittal.

But the decision should not conceal the sordid fact that Bibi, a mother of five, lost her 10 prime years behind bars. It shows that Pakistan's legal system must be reformed, and that blasphemy laws should be debated in parliament without any fear of Islamists.

The landmark decision has definitely paved the way for Bibi's exit from Pakistan, a country where religious hardliners bay for her blood. But we must not turn a blind eye to the fact that the court freed Bibi by using the same blasphemy laws that put her in jail in the first place. The Supreme Court acquitted Bibi — and then rejected the appeal against her acquittal — on the basis of a lack of witnesses. In a country like Pakistan, false accusations and witnesses are not hard to come by.

Pakistan, thus, must make sure that no person should simply be arrested on the basis of accusations and claims. Therefore, while we must respect that most Pakistanis are sensitive about blasphemy, legal loopholes must be removed to ensure that an innocent person doesn't have to suffer the way Bibi did.

Many Western countries have offered Bibi asylum, hence it is highly likely that she will leave the country very soon. Her daughters are reportedly in Canada, and that's the place where Bibi could end up. She could possibly take refuge in Europe, where she has many supporters.

It is time for Bibi to start a new life. Both Christian and Islamic traditions greatly value forgiveness, and it would not be surprising that Bibi would forgive her tormentors — both people and the state. But Pakistan definitely owes an apology to Bibi. And the best way to do so would be to make sure that no other person falls victim to the blasphemy laws ever again.

The Supreme Court's decision to acquit Asia Bibi, a Christian woman who had been condemned to death on blasphemy charges, is positive, but Pakistan needs procedural changes to amend controversial laws, says Anis Haroon. (31.10.2018)

In a landmark verdict, Pakistan's Supreme Court has acquitted Asia Bibi, a Christian woman who had been sentenced to death on blasphemy charges. The country's Islamists have vowed to protest against the ruling. (31.10.2018)