Hate, discrimination lead to rise of HIV in Russia, experts say | Europe | News and current affairs from around the continent | DW | 19.10.2017

Experts are shocked over the spread of HIV in Russia and eastern Europe. The problem has reached epidemic proportions, despite the fact that methods for stopping the spread of the virus are well known.

Taking a stand in Russia

Sylvia Urban of the umbrella group German AIDS Service Organization described the massive spread of HIV in Russia as "catastrophic." According to Russian government data, more than 100,000 people contracted the virus in Russia in 2016. During the same period in Germany, which has half as many residents, the Robert Koch Institute in Berlin registered just over 3,400 new infections.

Urban said improvements in global HIV prevention programs as well as testing for those infected have greatly reduced the spread of the virus and helped bring down the number of new HIV infections worldwide by a third since 2000. But she added that the global trend does not apply to eastern Europe.

Read more: 'I thought my daughter was a monster'

In Russia, where "risk groups" are harassed and discriminated against, Urban said issues of sexuality in general and homosexuality, in particular, are taboo. Funding for the fight against HIV has also been dramatically cut in the country and non-governmental organizations (NGOs) that receive funds from abroad have also faced state persecution.

Urban said that experience in Germany has shown the important role that NGOs play in disease prevention.

"The enormous success of HIV prevention in Germany illustrates just how effective structures that encourage interaction between government and civil society can be," she said.

Vadim Pokrovskiy, head of the Russian Federal AIDS Center, said Russians can only dream of such interaction between government and private organizations.

"We could learn a lot from Germany," he said, adding that drug use is the main was the virus is transmitted in Russia.

Since the majority of drug users in Russia are heterosexual males, their partners are also at risk. Pokrovskiy said it is "very easy" for a Russian woman between the ages of 25 and 30 to come across infected males. According to his statistics, roughly 3 percent to 4 percent of all Russian men between the ages of 40 and 50 are HIV positive. One in five drug users is infected as is one in 10 homosexual men.

"Homophobia and a negative view of drug addicts, as well as the obscure legal status of prostitutes, have all led to the fact that Russia uses less than half of all of the methods that have been scientifically proven to prevent the spread of HIV around the world," Pokrovskiys said.

"At times it takes on very conservative forms that are not in step with developments occurring in modern society," he said.

Luiz Loures, deputy director of UNAIDS, a United Nations organization, said that while the spread of HIV in eastern Europe has taken on epidemic proportions, discrimination, hatred toward sexuality and rampant xenophobia have been spreading just as quickly.

"AIDS spreads most quickly wherever people are being discriminated against," Loures said.

He emphasized that the situation is now worse in eastern Europe than it is in Africa.

"If no solution to stop the rapid spread of the virus is found in the region now, the costs of fighting it in the future will only be higher," Loures said.

'Self-isolation in questions of health'

Raminta Stuikyte, a consultant to the UN special envoy for HIV in eastern Europe, called the atmosphere for effective HIV prevention in Russia "poisoned."

"Sooner or later scientists will have to transcend ideology," the UN representative added.

Stuikyte said Russia has refused to take advantage of the global experience of scientific advances and recommendations from the World Health Organization or make use of experience gained by other countries.

"Dialog is essential for sharing knowledge gained in the field of HIV prevention," Stuikyte said. "There can be no self-isolation when it comes to health issues." 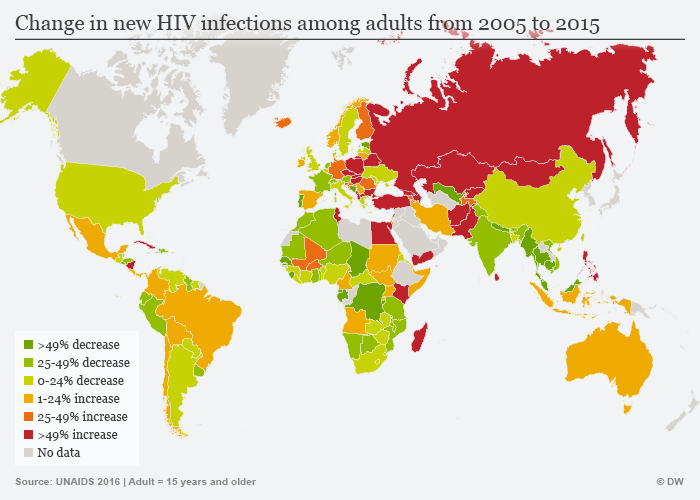