The Egyptian president is not at all worthy of distinction. But although a prestigious German award to him has been revoked, he is still being feted elsewhere, says Rainer Hermann of the Frankfurt Allgemeine Zeitung. 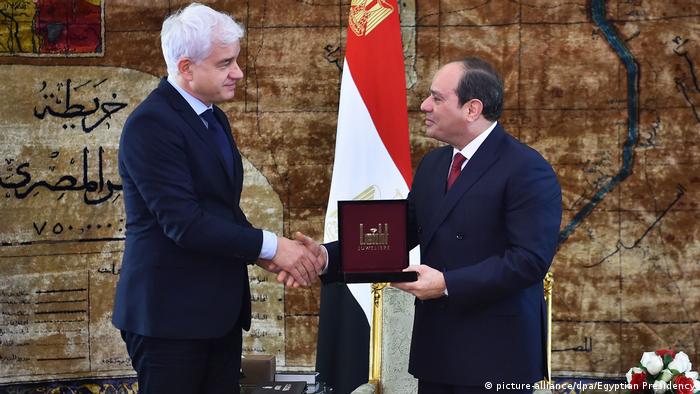 When organizers of this year's Semperoper Ball in Dresden announced their award for Egyptian President Abdel-Fattah el-Sissi, it sounded as if they were going to bestow the Nobel Peace Prize. The Egyptian strongman was called "a beacon of hope who lends courage to the entire African continent," with organizers eulogizing him as "a bridge builder and peacemaker."

The distinction seemed to put the general-turned-president on par with Ethiopian Prime Minister Abiy Ahmed, who won last year's Nobel Prize for signing a peace treaty with neighboring Eritrea after decades of bloody conflict. At home, Ahmed released political prisoners, and began jailing those guilty of violating human rights. Since taking office, he has opened Ethiopia to the world — politically and economically.

Egypt's jails have never been so full

The reality in el-Sissi's Egypt is the polar opposite. The Egyptian army, which Sisi led until becoming president in 2014, is involved in foreign military conflicts in both Libya and Yemen. And at home in Egypt, it controls at least half the national economy, helping generals help themselves to wealth and inhibiting competition. The number of political prisoners now locked up in Egyptian jails — which have never been so full — is estimated to be at least 60,000, and reports of brutal, systematic torture regularly make their way to the outside world.

Rainer Hermann is a journalist at the Frankfurter Allgemeine Zeitung daily

The country also lacks any opposition worthy of the name. Egyptian media, once the pride of the Arab-speaking world, have become utterly irrelevant since degenerating into a loyal megaphone for the strongman. And Egypt's law muzzling nongovernmental organizations (NGOs) has robbed civil society of the oxygen it needs to breathe. A person who stands for such things is no bridge builder, no peacemaker, no beacon of hope and certainly no symbol of courage.

Officially, Egyptian leaders say such repressive governance is necessary for maintaining stability. They say Egypt needs an iron fist to combat Islamic terrorists and maintain order in a country whose population of 100 million grows by a further 2 million each year.

Things have not improved since 2011 — they have gotten worse

Yet the problems that led to the mass protests at Tahrir Square and ultimately spread across the entire country in 2011 have not been solved, or even alleviated. In fact, they have only continued to get worse. Infrastructure has failed to keep pace with the growing population, the education system is a shambles, and only a small portion of the millions of young Egyptians who enter the job market each year have been able to find work.

In 2011, there were a number of valves — such as political mediators, opposition parties, the free media and civil society – that helped let off steam. But now those valves have been welded shut and the pressure just keeps building. One big contributor to the pressure is also the fact that the country's middle class no longer possesses the means to survive financially.

In 2011, there was hope that an orderly transformation could be achieved, but that window was slammed shut by the 2013 counterrevolution. Now the iron fist has a chokehold on the country.

Organizers in Dresden eventually pulled the ripcord and withdrew their prize for el-Sissi. Still, Western politicians continue to fete him in view of the fact that Egypt keeps African refugees from Europe's shores. But this view of Egypt is myopic. The long-term price for this false sense of short-term security is the very real threat that Egypt may well become a failed state — for Egypt's military leadership is not doing what is necessary to keep the country from being crushed by the massive challenges it currently faces.
Each evening at 1830 UTC, DW's editors send out a selection of the day's hard news and quality feature journalism. You can sign up to receive it directly here.