Switzerland's Green opposition parties have made historic gains, while the anti-immigration People's Party saw a drop in support. But political tradition might keep the Greens out of the cabinet. 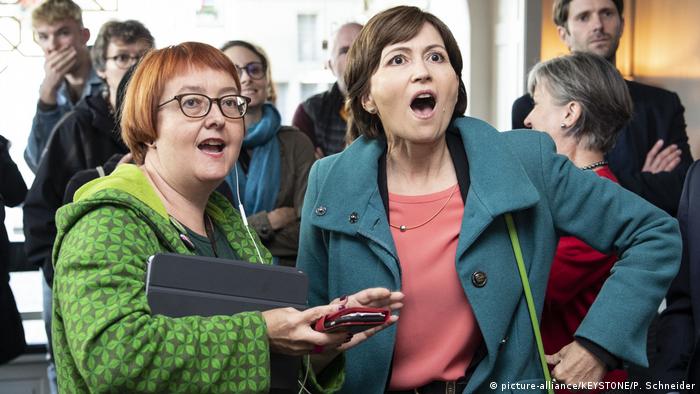 The left-leaning Green Party garnered 13.2% support, surpassing their pre-election projection with a six-point bump from their performance in the last election in 2015.

The Liberal Greens, a more centrist environmental party with libertarian socioeconomic policies, also gained ground with 7.8% of the vote, moving up from less than 5% in 2015.

Sunday's "green wave" marks a "tectonic shift" to the left, said Green Party President Regula Rytz, and gives the Greens or a coalition of the two environmentalist parties a chance for a seat in the broad coalition that has governed the country for decades.

"It is not a green wave, it is a tsunami, a hurricane," Celine Vara, the deputy Greens leader who won a seat in the upper house of parliament for Neuchatel canton, told Swiss radio.

"We have clearly beat our expectations," Green Party Vice President Lisa Mazzone told public broadcaster RTS. "We are tremendously pleased that the mobilization we saw on the streets has translated into votes."

Switzerland is especially vulnerable to climate change, with temperatures in the landlocked country rising twice as rapidly as the global average.

The anti-immigration SVP kept its top spot, but dropped from the 29% it won four years ago to 25.8%, according to RTS projections. The runner-up, the center-left Social Democrats, scored 16.6%, marking a 2.3% drop compared with 2015.

The SVP is the only major party that has not promised to pursue bolder climate action, and instead persistently denounced "climate hysteria" in Swiss politics.

"We knew we were going to suffer a setback," outgoing SVP senator Oscar Freysinger told RTS. "But the important point remains that before saving the planet we have to save Swiss sovereignty."

The Liberals came third with 15.3%, despite the party's percentage also shrinking somewhat compared with the previous vote.

The Greens surpassed the Christian Democratic People's Party, which holds one seat on the Federal Council, for the first time.

Under Switzerland's unique electoral system, voters were electing members to the 200-seat lower house, known as the National Council (Nationalrat), and the 46 seats of the Council of States (Ständerat).

Read more: Swiss elections: What you need to know

However, analysts have predicted that Green gains will do little to change the Swiss government — the Federal Council— even if they do increase their share of the votes.

The seven Cabinet positions have been made up of the same four groups for the last 60 years, and according to Swiss political tradition, Greens can only become ministers after getting strong results in at least two elections in a row.

Currently, the SVP occupies two of these positions, as do the center-right Liberal party and the left-wing Social Democratic Party. One is held by the Christian Democratic People's Party (CVP). The same four parties have divided up the Cabinet posts between them for the past 60 years.

The country's governance relies on consensus, and many have expressed reluctance to remove the long-serving CVP, who represent the country's centrist bloc. Instead, the left-wing Greens would prefer to take a Federal Council seat from the Liberal party. To do so, though, the party may have to engage in a delicate alliance with Green Liberals. 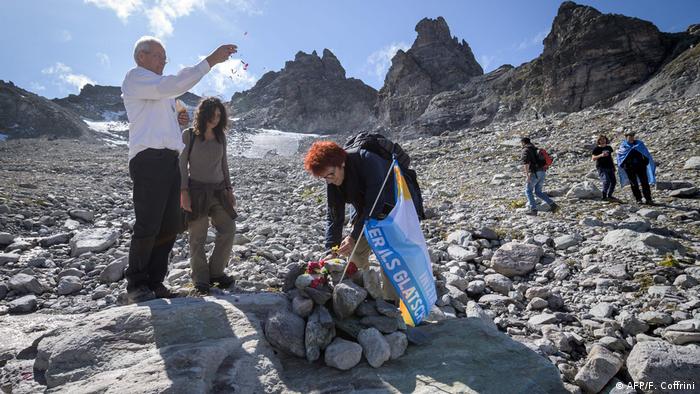 In September, people took part in a symbolic farewell ceremony to mark the "death" of the Pizol glacier

Climate change to the fore

Although Switzerland has not borne the brunt of climate change owing to its geographical position, experts have warned that the Alpine country has lost 15% of its glacier volume in the past 10 years.

Experts also think younger voters may have been mobilized in this election by their concern for environmental issues, driving up voter turnout.

The new parliament will decide the governmental positions on December 11. More than 4,600 candidates stood for the 200 seats available in the National Council.

Over 30 mayors from across the globe have pledged to deliver clean air for the 140 million people living in their cities. Delivering clean air on such a scale will take both ambitious targets and concrete action. (16.10.2019)

After agreeing on the terms of a new Brexit deal, EU leaders have turned their focus to other pressing issues, including climate change and the bloc's next budget. The talks are expected to be highly divisive. (18.10.2019)