Switzerland: Tens of thousands join climate march ahead of election

Tens of thousands of people have marched in Bern for more climate action, in one of Switzerland's largest protests in years. Three weeks before an election, a quarter of voters said climate policies are a top issue. 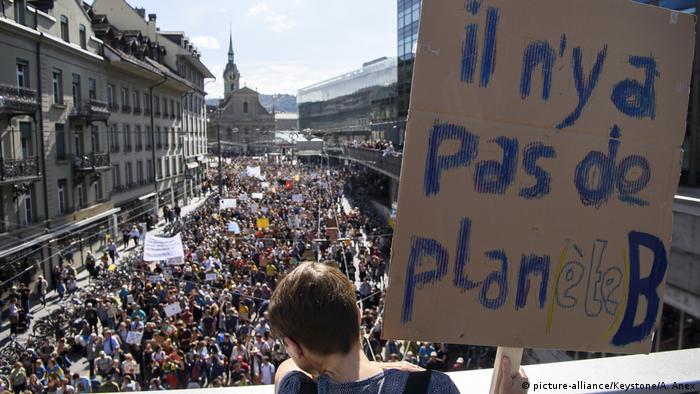 At least 60,000 people have marched in the Swiss capital, Bern, to call for urgent action to stop climate change, just weeks before a federal election in which the issue is topping voters' concerns.

The crowd — by some estimates as many as 100,000 people — was made up of mostly young protesters but also families, who attended the demonstration as part of a weeklong series of protests worldwide. It was one of the biggest demonstrations in Switzerland in years.

More than 80 organizations took part in the protest, demanding an exit from coal, gas and oil — and that Swiss banks stop funding these sectors.

To highlight the urgency of climate protection, more than 150 churches rang their bells at 2:30 p.m. local time, the Neue Zürcher Zeitung newspaper reported. Many of the churches left their clock towers at five minutes to 12 to show that humans are running out of time.

Saturday's march comes ahead of the Swiss federal election on October 20. According to pollster Sotomo, 38% of voters name climate change as the country's greatest political challenge, the second-most important issue after health insurance premiums.

Twenty-five percent of voters say climate change and carbon dioxide emissions would be relevant to their voting decision.

cw/cmk (AFP, dpa)Every day, DW's editors send out a selection of the day's hard news and quality feature journalism. You can sign up to receive it directly here.

Together with scientists, a group of 16 banks from all over the world has developed an innovative technology that will help lenders better manage the financial risks involved in the transition to a low-carbon economy. (26.04.2018)