Greens and SPD present coalition agreement in Baden-Württemberg | Germany| News and in-depth reporting from Berlin and beyond | DW | 27.04.2011

The Green party and the Social Democrats in the German state of Baden-Württemberg have presented their coalition agreement. For the first time ever, a Green politician is set to become state premier in Germany. 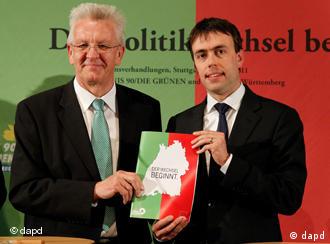 Both parties want radical changes in their state

The Green party and the Social Democratic Party (SPD) in the German state of Baden-Württemberg have finalized their coalition agreement.

State premier-designate Winfried Kretschmann (Greens) and the leader of the state SPD, Nils Schmid, presented the 83-page document, entitled "The Change Begins", in Stuttgart on Wednesday.

Under the agreement, Schmid is to become vice-premier and "super-minister" for finance and economy. Otherwise, so far only ministries have been named and not the ministers who will take them on.

The SPD, the junior partner in the coalition, will receive one more ministerial post than the Greens. However, the Greens will have a majority in the cabinet.

Among other things, the Greens are to take charge of the Ministry of Transport and Infrastructure. This means that the party will take on responsibility for the controversial rail project "Stuttgart 21." 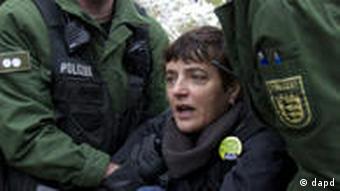 The Greens have always opposed the project, which would see Stuttgart's main train station go underground. However, it has been backed by the SPD.The coalition agreement says both parties now want a referendum on the topic by mid-October.

The agreement also envisages radical changes to the education system and transport policy. Among other things, the coalition wants to promote the use of electric vehicles and give equal priority to building road and rail networks.

Both sides also want to accelerate the phasing out of nuclear power in the state and Germany as a whole.

The secretary general of the CDU, Hermann Gröhe, has been quick to condemn the coalition agreement.

In an interview with the newspaper "Stuttgarter Zeitung" to appear on Thursday, Gröhe said the agreement “put Baden-Württemberg's success story unnecessarily at risk."

Gröhe said the coalition's plans to change the state education system would damage what was already one of the most successful systems in Germany. "People who change direction on a winning track become wrong-way drivers," he said.

He also slammed earlier comments by Kretschmann that fewer cars should be built, saying that such a policy in Stuttgart would damage the German economy as a whole. Baden-Württemberg is a center of car production in Germany.

The Greens and the SPD gained a historic victory in March 27 state parliamentary elections that put an end to 59 years of unbroken rule in the state by Chancellor Merkel's Christian Democratic Union.

Kretschmann, whose party gained 24 percent of the vote, is set to be Germany's first-ever Green state premier on 12 May.

The coalition agreement is to be voted on by both parties at special conferences on 7 May.

Winfried Kretschmann, set to become Germany's first Green party premier in the state of Baden-Württemberg, has ruffled feathers by suggesting the state's key auto industry must change priorities if it hopes to survive. (24.04.2011)