A Greek politician has made a scene at World War II memorial, confronting the German ambassador over his country's Nazi past. The move was met with a mixed reaction by the crowd on hand for the annual ceremony. 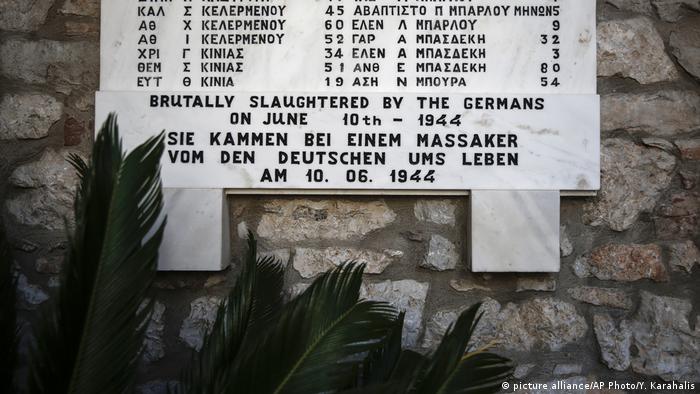 A Greek politician interrupted a World War II memorial ceremony Sunday to demand of the German diplomat that his country pay war reparations.

Ambassador Peter Schoof was about to lay a wreath at the memorial to victims of an SS unit in the village of Distomo when he was blocked by Zoe Konstantopoulou, who once served as the Syriza party's speaker in parliament in 2015. 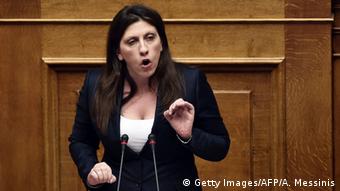 "You have no right," Kostantopoulou said in English. "You should pay back German restitution to the victims."

The crowd responded with a mix of applause and boos, with some chanting "shame" and "hypocrisy," implying that Konstantopoulou had abused the memorial ceremony for the sake of self-promotion.

It was left to a World War II resistance fighter against the Nazis to gracefully end the confrontation.

Manolis Glezos, a 94-year-old politician who was a Greek resistance fighter, took Schoof by the hand and led him to the monument, where he laid the wreath.

"The child of a perpetrator, no matter what and how many crimes his parents committed can do nothing about that," Glezos said. 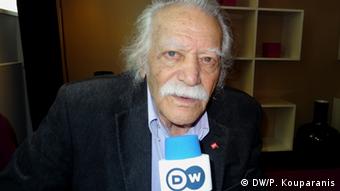 Manolis Glezos spoke to DW in 2015

Glezos is a national hero in Greece. On the night of May 31, 1941, the then 18-year-old Glezos climbed to the Acropolis with a friend and removed the Nazi's Hakenkreuz.

He was subsequently arrested three times during the war and repeatedly tortured.

Berlin insisted Greece impose harsh austerity measures in exchange for three bailout packages that the country has received since going into a financial freefall in 2010.

Historians in Greece have estimated that Germany's Nazi killed 130,000 Greeks, including the 218 victims of an SS unit massacred at Distomo on June 10, 1944.