The Greek government has said it wants to install a "floating protection system" to stop migrant arrivals from the Turkish coast. The system would involve setting up nets to stop boats making the crossing. 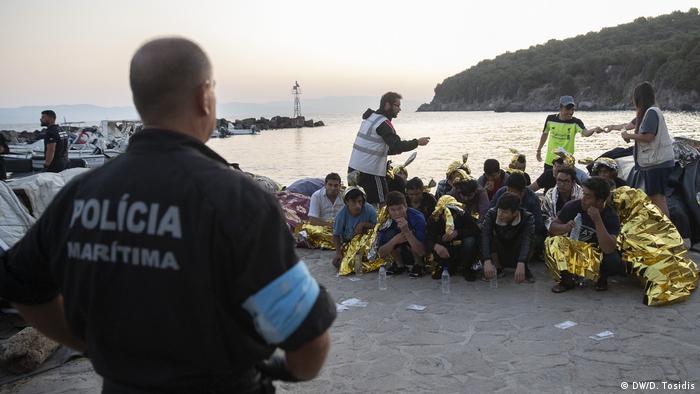 The Greek government on Thursday said it was looking into the prospect of a floating barrier in the Aegean Sea that could be deployed in emergencies to stop migrants.

The system could involve either barriers or nets to be used in emergencies, measuring some 2.7 kilometers (1.7 miles) in length.

A request for bids from companies capable of building the structure has been published by the Greek Defense Ministry.  However, Defense Minister Nikos Panagiotopoulos said the scheme — with a budget of some €500,000 ($550,000) — was still in its early stages.

"We want to see if this works, and where and whether it can be implemented," Panagiotopoulos told the public broadcaster Skai.

The plan could see nets deployed, or floating barriers similar to those deployed to prevent the spread of oil slicks. The specifications for the barrier are that it should be 1.1 meters (1.2 yards) in height, of which some 50 centimeters would be above the surface, and equipped with flashing lights.

It is understood that the barrier would be put in place north of the island of Lesbos, where migrants often make the crossing over a relatively short stretch of water.

However, critics of the plan have expressed doubts that it would work.

On Tuesday, the government said it wanted to employ an extra 1,200 border police in coming months to help stem the flow of migrants from Turkey. Some 400 are to be sent to the land frontier, with the other 800 being sent to the Aegean islands.

Meanwhile, the EU asylum office EASO also said it would double its staff in Greece to speed up the processing of asylum requests. There are currently 500 EASO officers in the country.

The rate of arrivals has spiked since April after a relative lull of three years. Under an agreement struck in 2016, Greece returns all migrants whose requests for asylum are rejected.

The rate of migrant arrivals has spiked since April after three years of a relative lull.

The rate of arrivals has outpaced the rate of processing, and the situation on the Aegean islands has worsened significantly over the past 10 months, with tens of thousands of people stuck in and near facilities built for fewer than 6,000.

The EU and Turkey reached a so-called refugee deal in 2016 to prevent illegal migration. But new figures show that a tiny fraction of migrants are being returned to Turkey, while the EU is resettling significantly more. (26.01.2020)