Women from eastern Europe and Latin America are sexy and love to date, a search through Google Images implies. A DW analysis reveals how the search engine propagates sexist cliches. 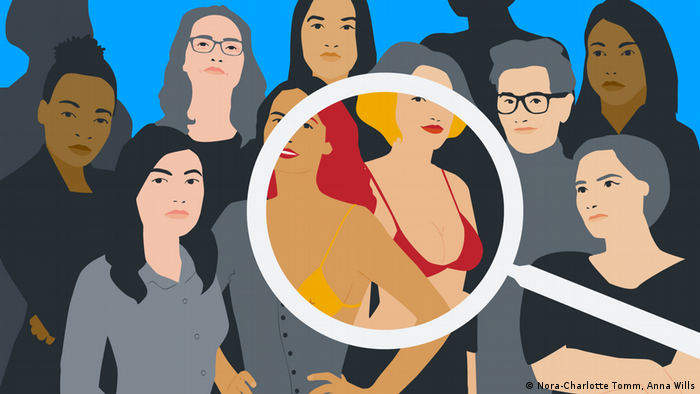 In Google image search results women of some nationalities are depicted with "racy" pictures, despite non-objectifying images existing

Google Images is the public face of everything: When you want to see what something looks like, you will probably just Google it. A data-driven investigation by DW that analyzed over 20,000 images and websites reveals an inherent bias in the search giant's algorithms.

Image searches for the expressions "Brazilian women," "Thai women"or "Ukrainian women," for instance, show results that are more likely to be "racy” than the results that show up when searching for "American women," according to Google's own image analysis software.

Similarly, after a search for "German women," you are likely to see more pictures of politicians and athletes. A search for Dominican or Brazilian women, on the other hand, will be met with rows and rows of young ladies wearing swimsuits and in sexy poses. 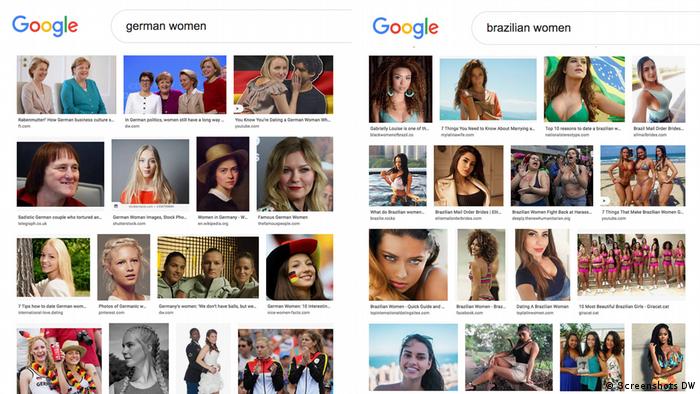 This pattern is plain for everyone to see and can be attested with a simple search for those terms. Quantifying and analyzing the results, however, is trickier.

What makes an image racy?

The very definition of what makes a sexually provocative image is inherently subjective and sensitive to cultural, moral, and social biases.

In order to classify thousands of pictures, DW's analysis relied on Google's own Cloud Vision SafeSearch, a computer vision software which is trained to detect images that could contain sexual or otherwise offensive content. More specifically, it was used to tag images that are likely to be "racy."

By Google's own definition, a picture that is tagged as such "may include (but is not limited to) skimpy or sheer clothing, strategically covered nudity, lewd or provocative poses, or close-ups of sensitive body areas."

In countries such as the Dominican Republic and Brazil, over 40% of the pictures in the search results are likely to be racy. In comparison, that rate is 4% for American women and 5% for German women.

The usage of computer vision algorithms such as this is controversial, since this kind of computer program is subject to as many — or even more — biases and cultural constraints as a human reader.

This specific software has already been shown to give out racist results, for instance.

Since Google's computer vision system works essentially as a black box, there is room for even more biases to creep in — some of which are discussed in more depth in the methodology page for this article.

Nevertheless, after a manual review of all pictures which Cloud Vision marked as likely to be racy, we decided that the results would still be useful. They can offer a window into how Google's own technology classifies the images displayed by the search engine.

Images link back to pages that objectify women

Every image presented on the results page also links back to the website in which it is hosted. Despite having images that are not overtly sexual, many of these pages publish content that blatantly objectifies women.

Furthermore, not only Latin American women, but also women from eastern Europe and southeast Asia are portrayed stereotypically.

To determine how many results were leading to such websites, the short description that appears just below an image in the search results gallery was scanned for words like "marry," "dating," "sex" or "hottest."

All websites with a title that contained at least one of those keywords were manually reviewed to confirm if they were displaying the kind of sexist or objectifying content that such terms imply.

The results revealed how women from some countries were reduced almost entirely to sexual objects. Of the first 100 search results shown after an image search for the terms "Ukrainian women," 61 linked back to this kind of content.

Similar results are also found when searching for images of women from countries such as the Czech Republic, Moldova, and Romania. The same trend was seen in south American and southeast Asian nations.

Although objectifying content is also found in searches for western European nationalities, it's more rare. Out of 100 results shown after a search for "German women," for example, only 16 were classified as such. For French women, the rate was 6%.

The keywords alone, although suggestive, don't tell the full story. A significant percentage of the results are hosted on websites with addresses such as "toprussianbrides.com," "hotlatinbrides.org" and "topasiabrides.net."

Most of these pages brand themselves as international marriage agencies or so-called "mail-order bride" services, which promise to connect men with women of specific nationalities for a fee. Others offer stereotypical guides for dating women from certain cultural backgrounds and reviews of niche matchmaking apps.

A closer look at the kind of content that they publish, however, makes clear who is their target audience: western men who are either looking for a submissive foreign wife or a sexual partner.

"If you have mostly dealt with Western women, who are famously career-oriented, then a relationship with a Ukrainian bride will feel very different to you," according to one such website, which was prominently displayed on the first row of Google results.

Tamara Zlobina, editor-in-chief of the Ukrainian magazine Gender in Detail, says that this kind of depiction is probably related to a common phenomenon that happened in her country in the 1990s.

"After the collapse of the Soviet Union, Ukraine was an extremely poor country. A lot of women went to western Europe trying to earn money for their families," she said, adding that this reality is rapidly changing as the country economic situation — and women's education and career perspectives — improves.

"I'd prefer to see diplomats, politicians, revolutionaries, the women who are fighting in our border wars... We have a lot of wonderful women. We should see that and not only this bride market."

According to professor Sirijit Sunanta, a Multicultural Studies lecturer at Mhidol University in Bangkok, real-word stereotypes also affect the way Thai women are portrayed on the internet.

"Thailand is seen as a kind of Disneyland for prostitution and sex tourism. This also carries on into the internet when you do a Google Search," she explains, adding, "When the stereotypes are about women of a particular nationality, they are harmful in another level. It reduces their complexity. Women are different everywhere."

A matter of language

There is another measurable connection between this kind of portrayal and a foreign, English-speaking audience. When comparing the results for the search terms "Brazilian women" and "mulheres brasileiras", the exact same phrase, but in Portuguese, there is a striking difference in the amount of sexualized content returned.

"The data that feed the algorithms reflects perceptions, biases and consumption patterns of a limited sample of humanity," according to Renata Avila, a race and technology fellow at Stanford's Institute for Human-Centered Artificial Intelligence.

"It is no surprise that search engines replicate biases that are not exclusive to the technology, but rather cultural ones. Women of certain nationalities are pigeonholed into sexual and services roles by a male English-speaking culture," she adds.

Experts tend to agree with one thing: On this issue, there are no isolated cases. It's all part of a deeper, more systemic problem.

Avila believes that fairer algorithms are incompatible with the current business model of "big tech" companies, which are mostly concerned with collecting data and increasing information consumption.

A similar position is held by Joana Varon, founder of the think tank Coding Rights. She says that search engines tend to reproduce the kind of content that is widely available online, and white men from developed countries have more access to the tools and strategies needed to publish content that drives page views.

"If an algorithm is not doing anything to compensate for this, then it'll be mostly racist, sexist, patriarchal," she says, adding that "Commercial algorithms and their providers should be accountable for what they show, since they are reinforcing an oppressing world view in a search tool that became universal."

For her, a possible way out of this situation would involve more oversight, more transparency and more competition. "We shouldn't have huge monopolies providing every service. Big tech companies should be regulated, but we also need to encourage alternative tools that don't come from the same paradigm as they do."

Avila concurs: "There is a need for another way of making technology. One of the starting points, which is largely incompatible with Silicon Valley's vision, is transparency and accountability." She believes that new solutions should be designed with the active participation of diverse, global communities.

DW sent a list of questions about the biased behavior of the image search algorithm to Google's press office, but the company didn't answer them in detail.

Instead, DW received a statement in which Google acknowledged that the search results did show "explicit or troubling content (...), including results that reflect negative stereotypes and prejudices that exist on the web," a problem which "disparately impacts women and women of color."

The company said that this kind of content appearing in the search results is affected by the way in which the information on the internet is organized and labeled. It claimed to be working to find "scalable solutions" for such issues, but those were not fully disclosed.

For the full statement by Google, the data, code and methodology behind this analysis, see this GitHub repository.

Can AI be free of bias?

Studies have shown that artificial intelligence can reflect the very prejudices humans have tried to overcome. As AI becomes "truly ubiquitous," rights groups have called on decision-makers to address algorithmic bias.

Google to pay millions to women, Asians in discrimination case

Is it possible for computers to become racist and act upon stereotypes? Maybe it is better to understand computers, robots and machine learning to understand their limitations and possibilities.