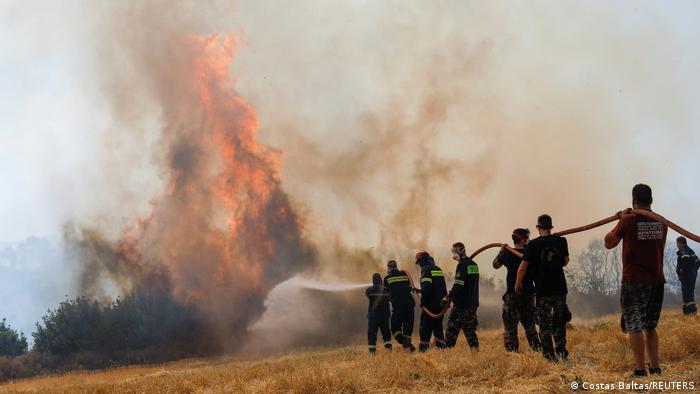 Thousands of residents fled a wildfire north of Athens early Friday as Greece's government warned of tough days ahead.

Firefighters continued their efforts to prevent the flames from reaching populated areas, electricity installations and historic sites, as the region faces its fourth day of inferno.

In heat wave conditions, fires tore through forest areas 20 kilometers (12.5 miles) north of the capital, destroying dozens of homes. Fires are also causing destruction in the Peloponnese, a peninsula located at the southern tip of the mainland; and in Euboea, Greece's second-largest island. These two regions, along with Athens, are suffering blazes of "enormous strength and scale," Greek Prime Minister Kyriakos Mitsotakis said.

Nearly 60 villages and settlements were evacuated Thursday and early Friday across southern Greece, with temperatures set to increase in the coming days. 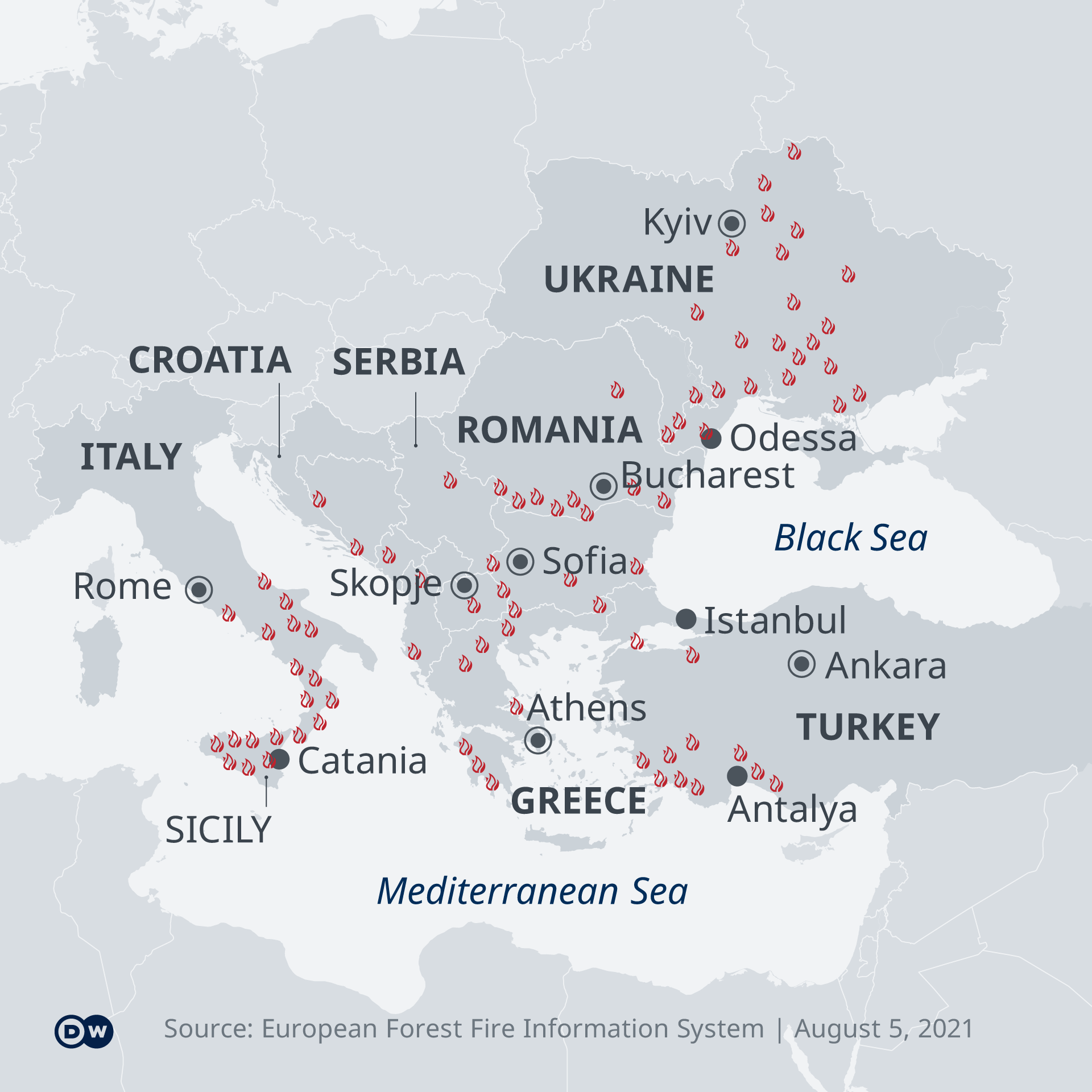 In a suburb north of Athens, a 38-year-old man died after he was hit by a falling transmission tower, according to the hospital that treated him.

Mitsotakis warned of strong westerly winds on Friday, meaning the affected regions are going through an "unprecedented" situation "because the past few days of heat and drought have turned the country into a powder keg."

People are not allowed to visit forests until at least Monday, while any work involving sparks or flames is banned.

Fire crews, planes and helicopters from five European countries are set to arrive on Friday and across the weekend as the EU steps up efforts to halt the fires.

Fire north of Athens 'essentially out of control'

Speaking from Athens, DW correspondent Barbara Wesel said Greece was "absolutely not" prepared for the "nightmare."

"Overall, we have a feeling that this is a force of nature that is completely uncontrollable," Wesel said, adding that Greece did not have the manpower or tools to contain the crisis.

While some people were criticizing the Greek government for not preparing for the disaster, Wesel said the anger would come later. "At the moment, everybody is sort of busy saving their lives," she added.

Here are the latest developments across the globe as several countries battle wildfires and increasing temperatures.

Turkey entered its 10th consecutive day of fires, with 12 blazes still out of control, the Presidential Communications Office said on Friday.

The country is suffering from its most severe fires in well over a decade, with the worst-affected areas along Turkey's southern and western coastline, and in the regions of Antalya, Marmaris, Bodrum and Milas.

Flames engulfed several neighborhoods during the night in Milas, but with residents already evacuated, the fire was eventually brought under control by emergency crews.

Hahn added that some people returned to their homes and businesses after authorities said a fire that threatened a nearby power plant was contained.

At least eight people have died in Turkey since the fires broke out last Wednesday, and more than 100,000 hectares of forest and fields have fallen victim to the flames.

In southern Italy a forest fire has claimed the lives of two people according to the San Lorenzo Fire Department.

The bodies of a man and a woman were discovered on a farm in the Calabria region.

The blaze had ripped through farm buildings.  Local media agency ANSA report the pair had been attempting to save a nearby olive grove.

Wildfires have been burning in Calabria, Sicily and Puglia among other areas. Fire chiefs say firefighting aircraft have been deployed in the area.

Wildfires in North Macedonia have prompted the government to declare a 30-day state of crisis.

Over the course of the monthlong emergency, the fire brigade, the military and security forces will fight the blazes.

Eight forest fires are still burning with the largest being near the village of Pehcevo in the center of North Macedonia.

Albania's Defense Ministry has described its fire situation as "critical" because of the increasing threat to villages and residents' homes.

A fire that has been raging for three weeks engulfed Greenville, California, on Wednesday and Thursday, prompting regional Republican representative Doug LaMalfa to say the town had been "lost" to the blazes.

The inferno left a trail of destruction, meaning most of Greenville's historic downtown and homes were reduced to ash as crews braced themselves for more severe weather in the coming days.

Greenville dates back to California's gold rush era with some wooden constructions well over 100 years old. 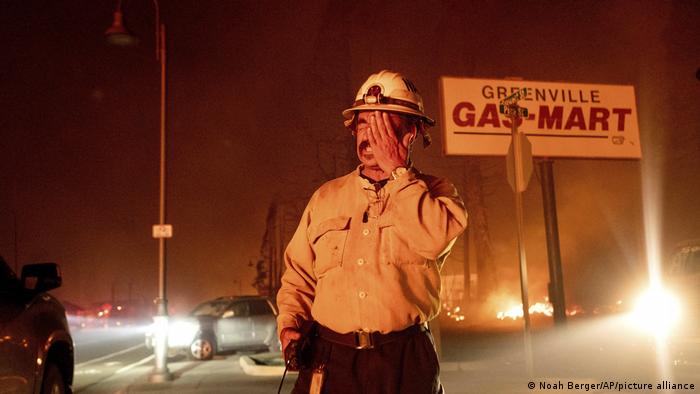 The nearby Dixie Fire, aided by winds of 40 miles per hour (64 kilometers per hour), "burnt down our entire downtown," Plumas County Supervisor Kevin Goss wrote on Facebook.

The UK announced a £5 million ($7 million, €5.9 million) research program on Friday to help better prepare for the risks posed by climate change.

With nearby nations such as Germany and Belgium witnessing devastating floods recently, and large areas in southern Europe currently ablaze, the UK is taking urgent action.

"From flooding to wildfires – the extreme weather events we've recently witnessed show how crucial it is for communities to build resilience and protect their futures," Alok Sharma, president for the COP26 international climate talks to be held in Britain later this year, said in a statement.

The UK's independent climate advisers in the climate change committee have warned that Britain has so far failed to prepare for the upcoming changes. A warmer planet is likely to bring many challenges, including worsening food security and more health risks due to overheating buildings.

Severe drought and early data suggests forest fires in Brazil this year will match those of 2019 and 2020 in terms of devastation caused.

With the Latin American country's forest fire season underway, the government space agency said last month more area was burned than in any July since 2016. Results for June were exactly the same, with that month's data also the worst in the last five years.

Most wildfires in Brazil are started intentionally, often illegally by land-grabbers clearing forest for cattle or crops. The fires tend to increase in intensity in June before peaking in September, according to historical data. They can easily get out of control during the dry season, burning large swaths of forest to the ground.

Brazil experienced catastrophic fires in the last two years, which caused the greatest annual forest loss since 2015.  Widespread criticism from the international community ensued over the response to the crisis by the administration of President Jair Bolsonaro, who has repeatedly called for development of the region while ignoring the pleas of the indigenous population.

Thousands flee as fires north of Athens flare up again