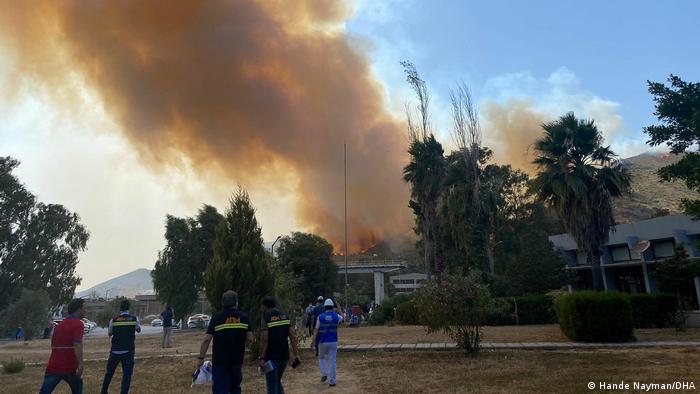 A thermal power plant on Turkey's Aegean coast was evacuated Wednesday as it was overtaken by wildfires. Workers at the site had previously emptied cooling tanks filled with hydrogen as a precaution.

The AFP news agency reported firefighters, police and workers fleeing the scene as flames roared into the site.

"Flames have entered the Kermekoy thermal power plant," said Mayor Muhammet Tokat of the town of Milas, in southwestern Turkey.

The plant uses coal and fuel oil to produce electricity.

Turkish President Recep Tayyip Erdogan was in the middle of a televised interview when the evacuation began, saying, "the power plant is at risk of burning," and adding, "There has been a tremendous wind. Otherwise, it would have been easier to contain."

Why is Erdogan being criticized for the catastrophe?

Erdogan on Wednesday bristled at criticism of his government's handling of the crisis. "Forest fires are an international threat, just like the COVID-19 pandemic," he said, "There should be no room for politics here."

On Tuesday, the country's media watchdog warned broadcasters they could face fines if they continued to show live images of the fires or of people running from them.

By Wednesday, most channels were only showing random reports on the fires.

The president has been criticized for being out of touch as the fires burn, as well as being unprepared for the disaster and slow to accept foreign assistance.

Last week, Ankara was forced to admit that it had insufficient numbers of planes and helicopters to effectively combat the flames. The EU dispatched three aircraft to assist. Erdogan refused similar assistance from Greece and Israel.

What has been lost in Turkey's fires so far?

Fires in Turkey have been raging for more than a week, destroying large areas of forest along the country's Aegean and Mediterranean coasts, displacing thousands and killing eight.

On Wednesday, Agriculture and Forestry Minister Bekir Pakdemirli said temperatures in Marmaris on the Aegean coast had shattered records, hitting 45.5 degrees Celsius (114 degrees Fahrenheit). "We are fighting a very serious war," he told reporters, "I urge everyone to be patient."