Gladbach in Israel: How a football match changed Israeli-German relations 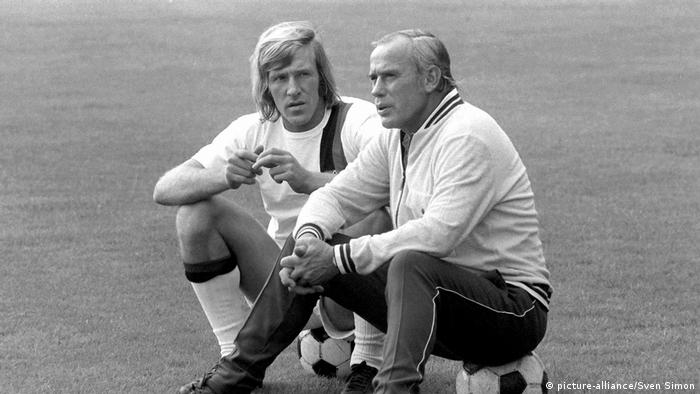 A football game changed my life.

Without this football game, who knows if I'd ever have been able to become a football journalist in Germany. It has affected every aspect of my life in many ways since I moved here from Israel. But this game, a friendly, was played long before I was born.

Up until recently, I didn't even know it had taken place.

Shadows of the past

It was 1970. Yakov was a 13-year-old in the greater Tel Aviv area when a European giant came to play a friendly against the Israeli national team. Being a devout football fan, he was excited by the prospect of seeing some of his heroes — whose names he knew only from newspapers — in real life. There was only one issue: That team was German. Borussia Mönchengladbach.

Despite Israel and Germany having established diplomatic relations five years prior to that game, many Israelis still saw the country as an enemy. The Holocaust was fresh in the memories of so many in the then-young country.

Protests took place and an attempt was even made to plant an explosive device in the Israeli Foreign Ministry. For many Israelis — and indeed, Jews — their state should not have any form of cooperation with the country responsible for the genocide of six million of their people in the Holocaust, despite Germany's efforts to start anew with the Jewish state.

"I remember going to relatives in Tel Aviv, hearing on the radio that Germany lost the World Cup to England [in 1966]," Yakov told DW. "This made my father very happy. I asked him why, to which he replied: 'The most important thing is that those despicable Germans don't win'."

The idea of Yakov attending a game against a German team was the topic of heated discussions at home. His father's family, from Poland, were all murdered by Germans in World War II and his father, who moved to Israel before the war, was among those that refused to buy any German-made products.

Back in 2017, I was sent to Berlin to cover the screening of a documentary about Israeli football. Ahead of the screening, Yakov told the story of how he attended the game, what the experience was like, and how he was in awe of Gladbach legend Günter Netzer. This was the same Yakov who was so excited as a 13-year-old, Yakov Hadas-Handelsman. He gave that speech as Israel's ambassador to Germany. This was the first time I heard about Borussia Mönchengladbach's trip to Israel. A total of 44 years after that game, Hadas-Handelsman was asked to present an award to Borussia Mönchengladbach for their contribution to promoting German-Israeli relations. He recognized their former players right away, despite the long time passed. "Who would've thought that the child from the Bloomfield Stadium [in Tel Aviv] will end up representing the State of Israel in Germany, presenting an award to the stars he was in awe of," he said.

From sadness to happiness

This wasn't the only story coming full circle that day. Mordechai (Motale) Spiegler was the Israeli national team captain at the game. Born in Russia, Spiegler's perception of Germany has changed throughout the years.

"I remember how, as a five-year-old, I started crying when I heard [West] Germany had won the 1954 World Cup. The Germans winning felt wrong," he said.

Then, 16 years later, Spiegler led Israel in a game against Borussia Mönchengladbach, a European giant back then, with stars such as Netzer, Jupp Heynckes, and legendary coach Hennes Weisweiler.

Israel's coach, Emmanuel Scheffer, learned his trade from Weisweiler as he had done his coaching badges at Cologne's German Sport University. The two became close friends. Scheffer is the only coach to have led Israel to a big tournament.

"Before the game, Scheffer told us: 'Listen to my instructions, and everything will be OK. We did, and we lost 0-6. If we hadn't listened, it would probably have been 12," Spiegler joked.

After the game, Spiegler kept in contact with some of Gladbach's players, including legendary midfielder Netzer, a friendship they maintain to this day.

"I was invited to attend a press conference in Germany when a documentary was screened on German TV about that friendly. I asked the organizers if Günter will be there. Once I was told he won't be, I said I'm not coming."

Former Paris Saint-Germain and New York Cosmos player Spiegler also recalls he was close to signing for Borussia Mönchengladbach after training with the club for a week, but the team had already reached its limit of non-German players. Just 20 years after shedding those tears upon hearing of Germany's 1954 World Cup win, West Germany won it again in 1974. This time, though, Spiegler felt anything but sad. "I had many friends in that West Germany team, and I was very happy for them."

Both Spiegler and Hadas-Handelsman laud the power of football in helping bridging divides between different people and bringing about change, ideas proven during that game. The stadium was sold out, and both say they remember how the crowd's positive reaction to seeing a top football team such as Gladbach, despite it being German. Israeli diplomat Hadas-Handelsman said the game was "an experience that stays with you for a lifetime."

"The reaction by West Germany's ambassador to Israel back then says it best. After Mönchengladbach's game, he said: 'What we've been trying to achieve in diplomatic means in the last five years, those hooligans have achieved in 90 minutes,'" Hadas-Handelsman recalls.

This was a story of friendships, a story which involved past, present and future. To me, this game stands as a focal point in promoting understanding between Israelis and Germans.

Given that I am now here in Germany, as a Jewish person, an Israeli and a journalist, it's safe to say this was a game that changed my life, and I didn't even know it had taken place.

'It's still there': German football fans battle against resurgence of anti-Semitism

Football fans in Germany were previously used to hearing anti-Semitic chants on a weekly basis. But 30 years later, the battle is far from over, and a shifting political landscape has put people back on guard. (27.02.2019)

Football officials have called the tweet "disgusting," saying the Union Berlin supporter should be prosecuted. The tweet was directed at the captain of Ingolstadt, who plays on Israel's national team. (09.03.2019)