Football officials have called the tweet "disgusting," saying the Union Berlin supporter should be prosecuted. The tweet was directed at the captain of Ingolstadt, who plays on Israel's national team. 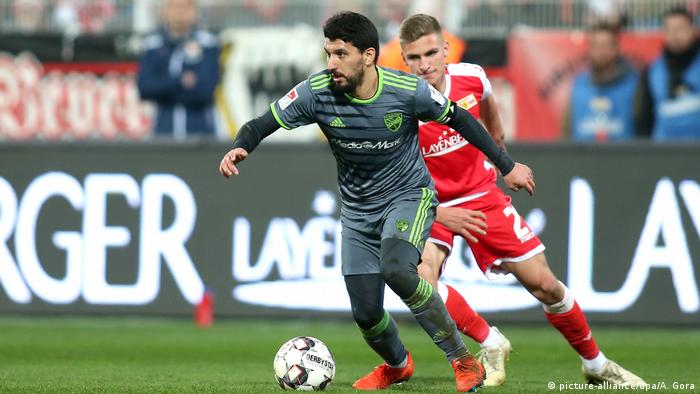 The tweet called for the player to be sent to a "chamber," an apparent reference to Nazi Germany's use of gas chambers during the Holocaust. The tweet was sent by a Union Berlin supporter during a match against Ingolstadt.

"We strongly condemn this disgusting, anti-Semitic tweet in all forms and demand that it be prosecuted," said Rainer Koch, vice president of the German Football Association (DFB). The federation said it will pursue its own investigation of the incident.

Cohen issued a response on his Twitter account on Saturday, appreciating the support he received "from all sides."

"As a Jewish professional footballer in Germany I would just like to say: I am very proud of my heritage and of representing my country in the second division and being captain of Ingolstadt. And in a country where I've lived for nine years, and I value its openness."

Ingolstadt also thanked Union on Twitter for its "immediate support." As soon as the Berlin team was notified, they replied saying they had already notified police of the user.

"Even after a most painful defeat, sometimes there are more important (fights)," Ingolstadt said in a tweet.

Authorities in Germany and other EU countries have been on alert amid rising reports of anti-Semitism, including violent attacks against Jews.

Israeli Ambassador to Germany Jeremy Issacharoff told DW last week that he is "very concerned" about the rising number of anti-Semitic attacks in the country.

Read more: 'It's still there': German football fans battle against resurgence of anti-Semitism

Stickers displaying Anne Frank wearing football jerseys have appeared in Germany as an anti-Semitic provocation by neo-Nazi fans. Dortmund and Leipzig hooligan groups appear to be copying their Italian counterparts. (31.10.2017)

Opinion: Anti-Semitic incidents in football are a warning sign to society

Recent reports about football fans using the Holocaust to insult their rivals originate from a centuries-old habit of perceiving Jews as lesser beings. This should not be accepted, says DW’s Felix Tamsut. (01.11.2017)