The persistent problem of racism in football

Jerome Boateng spoke out about racism he experienced in youth football in Germany, in the same week that Frankfurt's black players reported racist abuse during a match. Racism is still a blemish on the game. 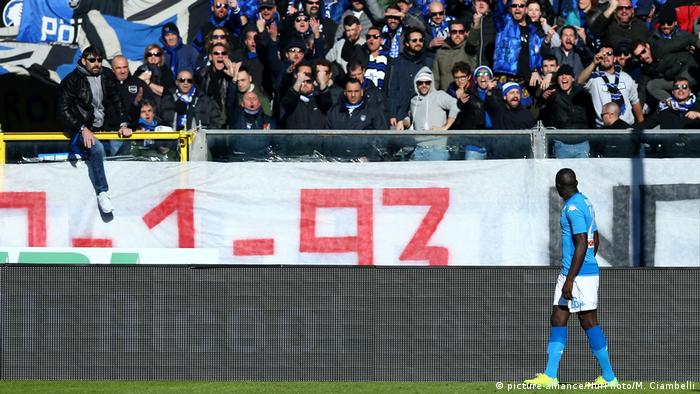 Eintracht Frankfurt continued a successful Europa League run on Thursday, defeating Apollon Limassol in Cyprus and booking their spot in the knockout round. But the achievement was not without a blemish, one that the sport seemingly cannot eradicate.

Fans of the Cypriot side allegedly performed Hitler salutes and leveled racist abuse towards Frankfurt's black players. UEFA is now investigating the incident and if proven, Limassol could face fines.

Eintracht board member Axel Hellmann acknowledged the reports. "I was irritated by the fascist symbols and expressions," Hellman said.

Unfortunately for Frankfurt, the incident is not the first one this season. Just last month, when they hosted Lazio Rome, a visiting team fan also engaged in a Hitler salute. The Lazio supporter was arrested, as this gesture is one of several from the Nazi-era that's illegal in Germany.

Robert Claus, author and expert on right-wing extremism in football, told DW that hooliganism is common in all European countries and that most of it tends to belong to the far right. "The political shift to the right has given a boost to right-wing hooligan groups in recent years," Claus added.

Read more: The fight against racism in Russian football

But it is not all concentrated in the hardcore fan scene, Claus points out that the prevalence of abuse from average stadium-goers is often overlooked. "The worst comments I witnessed in the stadium came from the main grandstand. This is completely neglected in the debate."

He explains that many ultra groups have spent the last 20 years working on reforming themselves, trying to curb racist behavior from their members.

Claus also points out the number of supporters' groups in Germany that specifically campaign against racism and xenophobia. "German football has become more sensitive to right-wing extremism in recent years," he explains, with the caveat that the extent to which it is genuine or just PR and marketing is not fully discernible.

"Some clubs like FC St. Pauli have had anti-racism in their DNA for a long time," Claus says of the notoriously left-leaning Hamburg outfit. "Its fan scene has been consistently committed against racism for 30 years."

Though Germany is arguably less riddled with racism in the stands, compared with Italy or some Eastern European countries, this does not mean that players haven't faced it on a personal level and within the community.

Germany international and Bayern Munich defender Jerome Boateng spoke out this week about his experience in an interview in his new lifestyle magazine Boa. He said he had experienced racism in football that dated all the way back to his days as a youth player.

"When I warm up on the edge of the pitch, I often hear spectators making monkey noises from the stands, although I have played so many games for Germany," said the 30-year-old. "Or they shout things like 'f--- off to your country' or 'bloody n-----'."

The Bayern Munich defender also spoke about Mesut Özil, whose controversial departure from the German national team following the World Cup in Russia this year prompted a conversation about racism in the game.

Read more: Opinion: Anti-Semitic incidents in football are a warning sign to society

"It was clear to me after the tournament that we in the team should have done much more for Mesut and backed him strongly in public," Boateng said. "It is a shame that it did not happen."

With the remarks, Jerome Boateng follows his brother Kevin-Prince's years-long outspoken advocacy against racism in the sport. In an interview this week with ESPN, the elder Boateng and former Eintracht Frankfurt player said that "nothing has changed" when it comes to racism in football.

"The only thing that has changed is that racism is more hidden," he said. "I said in Germany last year: It feels like we fight more against pyrotechnics than racism."

Claus shares Boateng's view on this. "I have never seen a similarly violent intervention by the police [as recently exercised against Hertha fans setting off pyrotechnics in Dortmund] employed against racist or right-wing extremist calls in the stadium," he concluded.

Why Nike's polarizing campaign is courageous

Nike has taken a clear stand against racism with its new ad campaign. Marketing expert Lars Cords tells DW why companies need to interfere in the political and social debate. (06.09.2018)