Attitudes to gender equality range from a Polish lawmaker who says women should not vote to the NATO chief who works hard to close the gap. DW's Teri Schultz walked the Brussels divide and spoke to both on Women's Day. 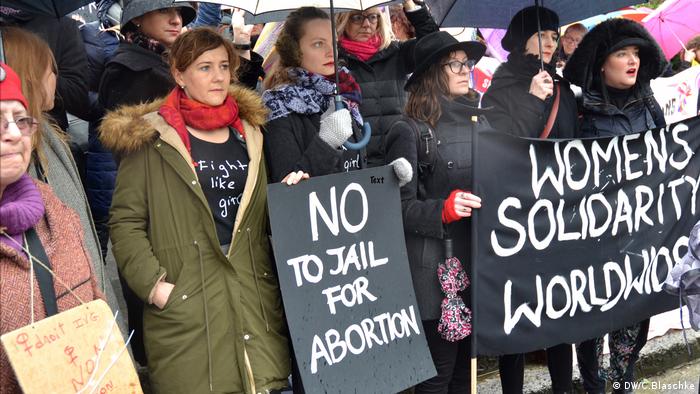 And, coincidentally or not, one Polish man has been inescapable in social media. European Parliamentarian Janusz Korwin-Mikke, who caused a firestorm last week by saying on the parliamentary floor that women "deserve" to be paid less because "they are shorter, they are weaker, they are less intelligent."

Korwin-Mikke's remarks - and a fiery retort by Spanish parliamentarian Iratxe Garcia Perez - went viral.  European Parliament President Antonio Tajani opened an investigation into whether the remarks violate EP rules, pledging to impose a "penalty commensurate with the gravity of the offense” if found guilty.

"By insulting all women, he displayed shameless contempt for our most fundamental values," Tajani said. "I will not tolerate such behavior, in particular when it comes from someone who is expected to discharge his duties as a representative of the peoples of Europe with due dignity."

I had to find out for myself what makes Korwin-Mikke tick. His pleasant assistant agreed immediately to an interview and the lawmaker greeted me with a cavalier kiss to the hand before we settled down for our chat. So did he really mean it? I ask. Indeed, Korwin-Mikke lists again what he considers women's inferior qualities, conveyed with a warm smile across his office desk.

Even though I knew it was coming, my hackles instinctively went up. I handed over the list of women inventors I'd printed out in response to him suggesting publicly that there were no notable inventions created by women.

I started to explain how the "shorter" part didn't really bother me, at 160 cm (5'3") I have no control over that. But Korwin-Mikke cut me off. "But short men earn less than tall men and no one tries to equalize this!" Unfortunately, both those things are true. He was referring back to the parliamentary debate over the gender pay gap during which he delivered his original remarks on women's inferiority.  That pay gap, according the European Union statistics agency Eurostat, stood at 16.3% across the EU in 2015.

Undeterred, I asked Korwin-Mikke if he believed I'm not as smart as my male counterparts. "That's unimportant," he protested, "I'm talking about the average woman, who is less intelligent than the average man", insisting statistics on male/female IQ back up his theory. (Made note to self: look up those numbers. There is no gap.)

He said that while women are "wiser", men dominate the high end of the spectrum of intelligence as well as the low end. "More saints and more criminals," he explained, "more geniuses and more idiots." He regrets that women got the right to vote, explaining that "big hearts make bad policy."  When I pointed out that said democracy had provided him a well-paid job, he chuckled and acknowledged he does appreciate the paycheck and the publicity. To hell with hypocrisy. 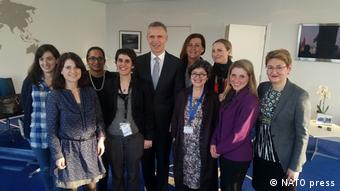 Across town at NATO headquarters, where one may presume it's a male-dominated world, things couldn't be more different. Invited to a special female-only briefing with Secretary General Jens Stoltenberg, we brazenly taunted him to out-do the self-branded "feminist" Canadian Prime Minister Justin Trudeau. That made him laugh. Stoltenberg has been working for gender equality since his early days in Norwegian politics.

Stoltenberg relayed with visible delight that at the February ministerial, a full quarter of defense ministers had been female, the highest percentage ever.  Six of the 28 ambassadors to NATO are women; Allied Joint Force Command Naples is headed by US Navy Admiral Michelle Howard.  Stoltenberg says these advances have been in just the last couple of years. "It is an inspiration to to do more," he said. "We are in no way satisfied. But it shows that change is possible also within in traditionally very male-dominated organizations like NATO and like the armed forces in many countries."

Stoltenberg said the "gender perspective" is impressed upon all NATO employees, soldiers and partners, "that they behave in a way which is not discriminating against women."  That's important when out on operations as well, he pointed out, where "women are very often the most vulnerable and those who suffer the most in different kinds of conflicts. We see that all over the world."

He maintained that improving gender equality is not just fair for women, it's smart for the alliance. "If you want the best people," he said, "you should not just recruit from 50 percent of the population."

'All about the hullabaloo'

But when it comes to smart, there's one way populists like Janusz Korwin-Mikke are winning.

When I confronted him, he didn't renounce his views on women - in fact, he went further, decrying women's suffrage and saying he doesn't let his wife drive - but confided he would not actually prefer to spend his parliamentary speaking time on what is now his signature issue (though he's been in trouble for espousing unpalatable views before).

It's all about the "hullabaloo," he admitted. "If I am saying something wise about taxes, nobody listens. But when I say what I think about women - oh, then everybody comes!" Right, me included.

He said it would have cost him a "million euros" to buy this kind of advertising. And in comparison, any fine he might incur for saying these things are dismissed with a wave of his hand.