Poland's abortion laws are already very restrictive, now the government is seeking to tighten them further still. But fierce opposition to limits on women's rights is growing.

Polish lawmaker Janusz Korwin-Mikke has come under fire for justifying paying women less because of what he called their innate inferiority. The European Parliament member is now being investigated for hate speech. (03.03.2017)

Thousands have demonstrated in Poland's major cities against a proposed law that would place further restrictions on abortion in the country. Poland's parliament recently rejected a total ban on the procedure. (24.10.2016)

Poland's parliament has roundly rejected a controversial proposal for a near-total abortion ban. The right-wing government was forced to back down after massive protests by women against the proposed measure. (06.10.2016)

For days now, thousands of people have been taking to the streets in Poland to protest restrictions on women's rights. This is the first time that Anna and Viktor, both in their mid-30s, have taken part in such a demonstration. They are both Catholic, and voted for the ruling right-wing conservative Law and Justice Party (PiS) in 2015. In the past they had no interest in "feminist" women's protests, yet a fateful event and the trauma that followed changed their outlook.

In the 12th week of Anna's recent pregnancy, doctors discovered grave health problems in the fetus – an instance in which an abortion would be legal, even in Poland. Still, no doctor was willing to perform the abortion even though it was clear that Anna would eventually deliver a dead baby. Several doctors referred to the so-called "conscience clause" – which allows them to deny a patient help if it goes against their own conscience.

"A doctor that has to act against his own conscience experiences great pressure – and that does not help patients," explains Poland's ultra-conservative Minister of Health, Konstanty Radziwill. A current maxim among Polish doctors is: conscience before law. "The fact that my wife and I were simply forced to wait for months for the stillbirth of a dead fetus was inhumane and heartless," complains Viktor, who sees anything but Christian charity in the conscience clause signed by Catholic doctors.

"One can only imagine where those rape victims then have to go," says Labedz. It is estimated that some 150,000 illegal abortions were performed in Poland in 2015. "The more restrictive the laws, the more illegal abortions," Labedz told DW.

Yet, things could get even worse. In recent debates held in the Sejm, Poland's lower house of parliament, there has been serious discussion about prison sentences for women who seek and doctors who perform abortions. Restrictive laws drastically reducing access to contraception are also scheduled to be discussed soon in parliament.

The minister of health recently decided that the so-called "morning-after pill" may only be purchased on prescription in Poland, although it is available over the counter in all other European countries. He claims that the pill leads to premature births despite the fact that the World Health Organization (WHO) recognizes it as a form of contraception."I am a doctor myself, and I would refuse to give it to a girl that had been raped," the health minister, a proponent of the conscience clause, proclaimed. 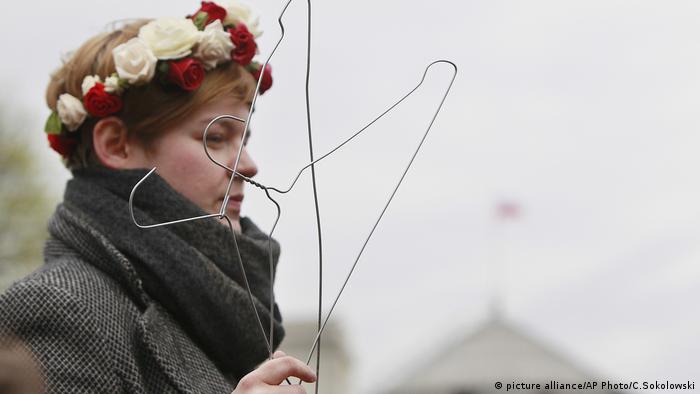 Concerns are growing in Poland over a rise in illegal abortions

As of late, midwives have also joined the women's protests. They oppose the elimination of existing standards regulating obstetrics. Right now, women giving birth are administered free anesthetics in the delivery room, can assume any position they prefer to deliver and are allowed to keep their children with them after birth. In the future doctors are to decide on all of that. Many women say that is a regression. "Keep Your Hands Off My Uterus!" can be seen on placards carried at protests.

The elimination of federal funding for in vitro fertilization is also causing a stir at the moment. 20,000 couples have received grants for such assistance since 2013, and have brought some 5,000 children into the world as a result. But church leaders and government representatives claim that in vitro fertilization goes against Catholic ethics.

Anna, who was forced to give birth to a dead fetus because of "Catholic ethics," now supports the women's rights movement. This Wednesday she will don black clothing and attend a mass demonstration to mark International Women's Day in front of the parliament in Warsaw. Her placard bears the words "My Body, My Choice." She says, "Medicine, politics and religion must remain separate from one another." 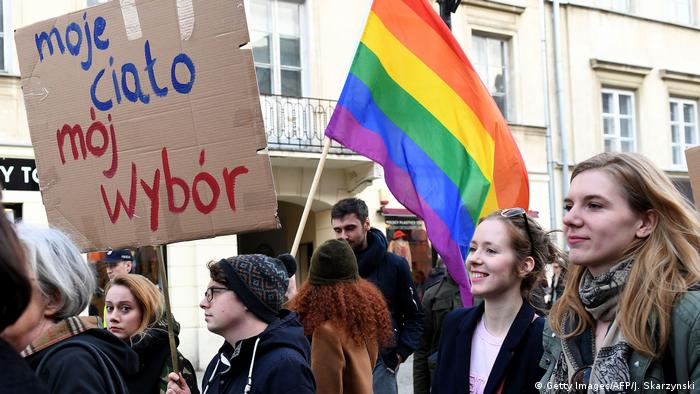 'My body, my choice' reads the placard held up by protestors

Preparing for a 'Black Wednesday'

Another issue that has caused just as much outrage as the tightening of abortion laws was the recent stance taken by the ruling PiS party and Polish bishops regarding the Council of Europe Convention on preventing and combating violence against women and domestic violence, which was ratified two years ago. President Andrzej Duda declared it "superfluous," saying that "it should not be put into practice." Some 1 million women are the victims of violence in Poland each year – 90 percent of those who perpetrate such violence go unpunished.

This Wednesday, demonstrations are scheduled to take place in 49 countries as a way to signal solidarity with the women of Poland. "We are witnessing a whole new political situation," says Magdalena Lempart, who initiated the "International Women's Strike." She says, "Populist governments are actively fighting against women's rights."

That point was perfectly illustrated by words recently delivered at the European Parliament by Poland's rightwing radical European representative, Janusz Korwin-Mikke, on the topic of women. Known for his provocative choice of words, he said: "On average, women are weaker, smaller and less intelligent than men" therefore it is only fair that they should earn less. That gives thousands of Polish women just one more reason to take to the streets. Women's rights protests are scheduled to take place in some 100 cities and villages across Poland on March 8. Participants intend to dress in dark colors and have already said that it will be a "Black Wednesday."