A pair of Yazidi women's advocates have been awarded the European Parliament's Sakharov Prize for Freedom of Thought. The 50,000-euro prize for human rights has been handed out since 1988. 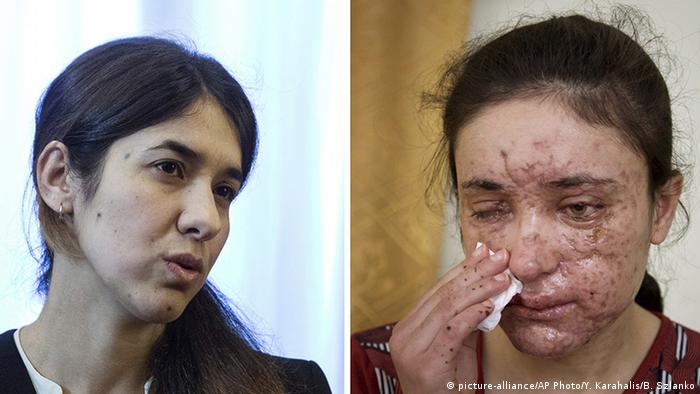 Iraqis Nadia Murad(pictured above, left) and Lamiya Aji Bashar (pictured above, right), who hail from a Yazidi village in Iraq that was overrun by the self-styled "Islamic State" (IS) in 2014, were named Thursday as recipients of the Sakharov Prize. They were nominated by European parliamentary deputies from multiple parties. The laureates' names were announced at about midday by European Parliament President Martin Schulz, and an award ceremony is slated for December 14.

Murad thanked the EU for the award in a Twitter message.

In a statement released on her personal blog, Murad said, "This acknowledgement of the suffering of Yazidi women and the Yazidi people is a profound message to the ISIS terrorist group that their criminal inhumanity is condemned and their victims are honored by the free world. This is also a message from Europe to the world that Europe cares about human values and human dignity."

Murad also called for safe zones for Yazidis and other vulnerable communities, and requested that crimes committed by IS be tried at the International Criminal Court (ICC).

Thousands of Yazidi girls and women were forced into sex slavery by the extremist group in recent years. The two award winners managed to escape and raise global attention to rampant human rights abuses.

Murad, now aged 23, was held by IS militants in Mosul but escaped in November 2014, reached a refugee camp and eventually
made her way to Europe. She has since become an advocate for the Yazidis, and refugee and women's rights in general.

Bashar, 18, was captured in the same raid as Murad and also kept as a sex slave by IS. She escaped in March but was badly
disfigured and blinded in one eye when a landmine went off as she fled. Two companions were killed. She has since undergone reconstructive surgery and works as an advocate for members of the Yazidi sect.

Both women reside in Germany.

The Yazidi are a religious sect whose beliefs combine elements of several ancient Middle Eastern religions. Hard-line Islamists consider them pagans or devil worshippers. The United Nations said in a report in June that IS had committed genocide against the Yazidis in Syria and Iraq to destroy the religious community of  400,000 people through killings, sexual slavery and other crimes.

Kurdish forces - with arms and air cover from the US-led military coalition - retook the moutnainous Sinjar region in the end of 2014.

Teenage education activist Malala Yousafzai has called on the EU Parliament to improve children’s access to education. She made the plea while collecting its prestigious Sakharov prize for freedom of thought. (20.11.2013)

Other contenders this year included Turkish journalist Can Dundar, who was sentenced in absentia to more than five years in jail for publishing information about Turkish arms shipments to Syria. He is now exiled in Germany.

Crimean Tartar leader Mustafa Dzhemilev, a human rights activist and the former chair of the Tartar parliament in Crimea, was also a tapped as a possible winner. He has been barred from entering the Ukrainian peninsula since its annexation by Russia in 2014.

The award was created in 1988 to honor individuals or groups that defend human rights and fundamental freedoms. It was named for Soviet dissident Andrei Sakharov.