Germany′s water management caught between flood and drought | Germany | News and in-depth reporting from Berlin and beyond | DW | 20.07.2021

For a long while now, there has been talk of a drought in Germany; now, many regions have been deluged with water. How do authorities prepare for these two extremes? 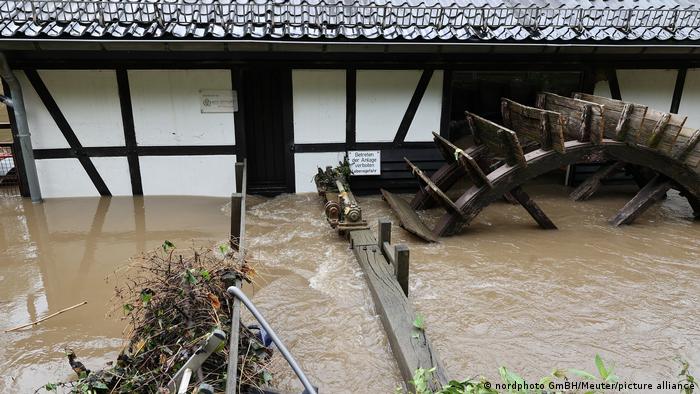 Too much water can be devastating, but too little is a problem as well.

Water is a vital resource for life, but it can become a deadly danger.

The flood disaster in western Germany has highlighted both these opposing aspects at the same time. In some villages and towns in the Eifel region that were particularly badly affected, there is a shortage of drinking water because the flood damaged supply facilities. In the district of Euskirchen, authorities advised residents to boil the usually excellent tap water before drinking it, because it could have been contaminated by burst pipes and heavy rainfall.

In Germany, water and wastewater management are the responsibility of municipalities. Some of them have formed larger associations to improve efficiency.  For example, municipalities in the Euskirchen district and other areas right up to the German-Dutch border have joined to form the Eifel-Rur Water Association (WVER).

In principle, Germany has more than enough water to supply private homes and industry. Authorities reckon with an average available water supply of 188 billion cubic meters (almost 50 trillion gallons) in the long term — twice the amount of water in Lake Geneva. In 2016, according to the Federal Statistics Office, 13.5 % of this amount was extracted. Incidentally, most of this was used in industry, agriculture or to cool power plants, and not as part of the public water supply.

An annual extraction of up to 20%  is considered unproblematic. But since 2011, the available water supply has remained below the calculated amount — in 2018, Germany had only around 119 billion cubic meters of water available as a renewable resource.  After three particularly hot and dry summers in a row, some experts warned in January that the soil in Germany was almost completely dried out.

Now, at least for the time being, water authorities are struggling to cope with the opposite extreme. Dams that for a long time were recording low water levels are now literally filled to bursting point. For days after the initial flooding, the situation of the Steinbachtal dam in the Euskirchen district remained worrying. Some towns and villages situated below the dam were evacuated, as it was taking longer than planned to drain off the water that is putting a strain on the structure. Residents could only return on Monday. 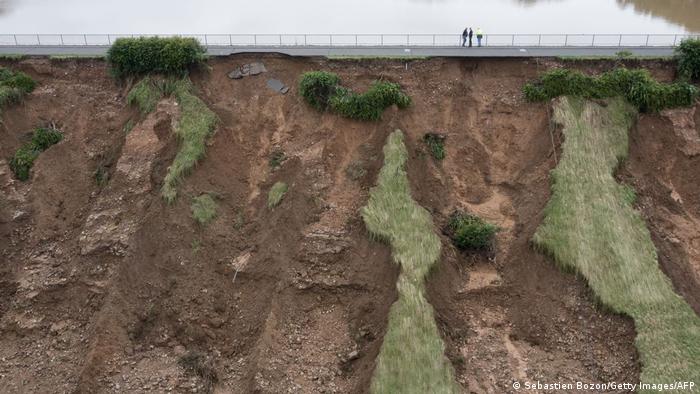 The back wall of the Steinbachtalsperre dam is severly damaged

For at least a decade now, there has been an EU directive obligating member states to manage flood risks. In Germany, that management is principally left up to the individual federal states, or Länder. For example, the state of Rhineland-Palatinate, which was particularly hard-hit by the flooding, draws up risk assessments and plans and builds protection measures like dikes on large waterways such as the Rhine and Moselle. The German Environment Agency (UBA) recently assessed the measures taken nationwide on the most important German rivers as being effective. And indeed, the water level of the Rhine barely caused any problems during the recent catastrophe. 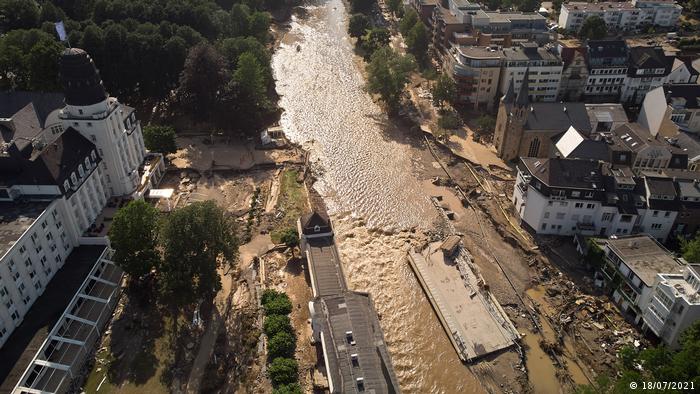 Compared to bigger rivers, the flooding of the river Ahr was exponentially worse.

The rivers whose flooding caused the worst devastation — the Ahr and Kyll in Rhineland-Palatinate and the Erft in North Rhine-Westphalia — are, however, smaller waterways. Here, municipalities are responsible for flood protection measures.

In Rhineland-Palatinate, the state finances up to 90% of the costs for preventive measures against flood and heavy rainfall at a municipal level. According to Malu Dreyer, Rhineland-Palatinate's premier, €16 million ($18.88 million) has been invested in flood prevention in the Ahr valley. In North Rhine-Westphalia. there is a special fund for such municipal projects, which amounted to €66 million in 2018.

Owing to the climate crisis, both of these extreme situations — too much or too little water — will occur more frequently in Germany in the future. To prepare the country for these challenges, Environment Minister Svenja Schulze has laid out a national water strategy. It aims to make lakes and rivers cleaner and healthier, to reform water management and combat water shortages. One of its ideas is to have "smart" water tariffs that make it cheaper to use water during times of low demand. It also proposes setting up hierarchies that will determine who will have priority for using water when a particular region is facing a shortage.

The plan envisages investments to the tune of around €1 billion up to 2030, but still needs to be approved for implementation by the next government. For this reason, the opposition Greens have called the strategy "useless if it is not put into action in the end."

The word "sponge city" is also used in the plan. In other words, it wants cities in the future to have enough green areas where water can easily seep away and flow into the groundwater. This would mean that water from heavy rainfall would not end up going straight into the sea via the rivers. 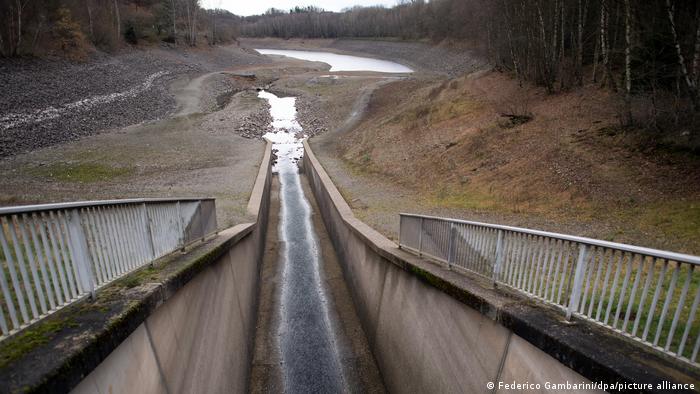 This winter, the Wuppertalsperre in North Rhine-Westphalia was barely full, as seen here. Now it looks completely different.

In light of the current flood disaster, Germany's umbrella association for energy and water management, BDEW, also warned that fewer surfaces in city centers should be cemented over and that the remaining drinking-water resources must be protected from contamination.  The BDEW's managing director, Martin Weyand, told the Redaktionsnetzwerk Deutschland media group that "we must not recklessly put our drinking-water resources at risk."

Rescue operations have continued across the region in western Germany hit by devastating flooding. The crisis has escalated further, as parts of eastern Germany and Austria are now being ravaged by the floodwaters.

The death toll following the devastating flooding in western Germany has risen above 150. Chancellor Angela Merkel has said Germany will "stand up to this force of nature."

How can we prepare for extreme flooding?

As the floodwaters recede following the devastating deluge in western Europe, survivors have begun the long, difficult process of cleaning up and rebuilding. But what can be done to reduce future risks?

As Germany mourns after deadly floods devasted swaths of the country, the cleanup operation goes on. The situation remains tense in some areas. Follow DW for more.