Disabled and homeless people as well as welfare benefit recipients were nearly the recipients of unfit face masks, according to a magazine report. 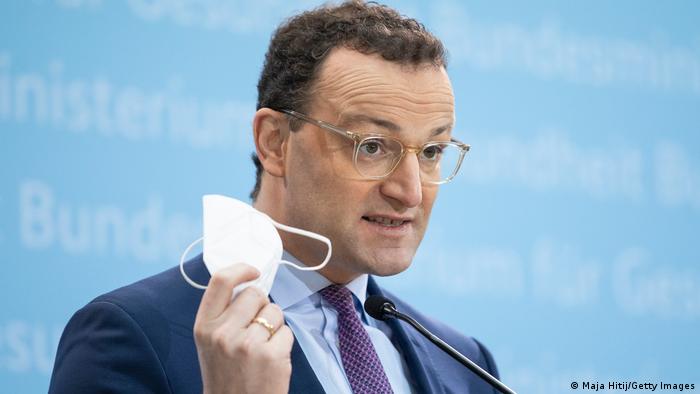 Jens Spahn has come under fire after a report emerged, detailing Health Ministry plans to hand out untested face masks to vulnerable groups

German Health Minister Jens Spahn is facing fierce cross-party criticism after a report emerged about his ministry's plans to dispose of unusable face masks by handing them out to vulnerable groups amid the coronavirus pandemic.

The Health Ministry on Saturday hit back at the claims made in the German magazine Der Spiegel, saying all its masks had been tested to a high standard and that protection of the wearer was its top priority.

The magazine on Friday reported that the Health Ministry had ordered face masks from China in Spring 2020 for an estimated €1 billion ($1.2 billion). The order was placed amid a global mask shortage and had not been tested to meet EU standards.

Due to this, the masks were unable to be used on arrival and needed to undergo emergency testing to be deemed fit for use.

The Ministry of Health under Spahn drew up plans to distribute the masks to the homeless, the disabled or Hartz IV benefit recipients, the magazine reported.

But the Ministry of Labor, which is responsible for mask safety, refused to give its approval to the plan.

"The minister must explain himself about this as soon as possible, he cannot point the finger at others here," Klingbeil added.

"Attempting to get rid of useless masks by giving them away to needy groups in our society ... this is simply beyond cynicism and absolutely unacceptable," Katja Mast, parliamentary group vice chair, also of the SPD, wrote on Twitter on Saturday.

The parliamentary leader of the Left party, Jan Korte, said that it "no longer seems to matter that the health minister once again seems not to care about the health of disabled and socially-disadvantaged people if his own failures are covered up as a result."

He criticized the lack of a resignation "or any consequences."

The pro-business Free Democratic Party (FDP) Vice Chair Michael Theurer called for a special investigator from the Federal Audit Office to look into the issue of the unused masks, in comments to the Handelsblatt business newspaper.

COVID-19 Special: How to protect yourself with a mask

The Health Ministry hit back at the accusations on Saturday, saying that "strict attention" had been paid to quality during the procurement of medical goods, including face masks, during what it described as an "emergency situation."

It said such accusations were "not acceptable" and not based on facts.

As soon as the goods were identified as "defective," the ministry did not pay for them, the BMG added.

"The best possible protection of the citizens and employees living there was at all times in the foreground" when it came to delivering masks to facilities for homeless and disabled people, the ministry also stressed. "Other considerations played no role on the part of the BMG."

Where are the masks now?

According to Der Spiegel, there is currently a plan to store the masks in a national emergency reserve of the federal government. When they reach their expiration date, they will be destroyed.

But the BMG also disputed this, saying: "Decisions on the destruction of stocks have not been made by the federal government." The masks were fully usable for infection control, it said. The BMG said there were plans to transfer the masks to the newly created National Reserve for Health Protection.